You’ve probably noticed that there’s a lot going on these days. The coronavirus crisis is ‘free-ranging’ once again, although the news of a vaccine with 90% efficacy, to be widely available by next spring (all going well), is certainly to be cheered. On the political front, I thought the vote on November 3rd would provide resolution and put a damper on some of the rancor emanating from Washington. How naïve of me. 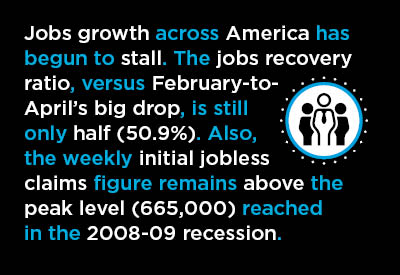 Against the backdrop of the foregoing-outlined crises in health care and government leadership, there are the following ‘nuggets’ to consider from recent private- and public-sector data releases.

(1) The number of coronavirus infections has become the leading indicator for how the national and regional economies will perform. With the latest take-off in COVID-19 cases, jobs growth across America has begun to stall. The jobs recovery ratio (or jobs ‘claw-back’ ratio), versus February-to-April’s big drop, is still only half (50.9%). The weekly initial jobless claims figure, more than seven months after it initially soared under the weight of the first stay-at-home advisories, remains above the peak level (665,000) reached in the 2008-09 recession. For the week ending November 7th, U.S. initial jobless claims totaled 709,000.

(2) According to the Bureau of Labor Statistics, however, for those individuals who have retained their jobs, compensation rates have been soaring. Weekly earnings from BLS data, for total employment across the economy, are up in a range of +5.0% to +6.0% year over year. The degree of increase means significant ‘real’ earnings gains, since the rate of inflation y/y is just +1.5%.

(3) Through October, on a year-to-date basis (i.e., compared with January-to-October 2019), ConstructConnect’s -19.7% decline in ‘grand total’ starts, by dollar volume, is comprised of ‘nonresidential building’ at -33.0%; ‘engineering/civil’, -18.4%; and ‘residential’, -5.0%. In turn, ‘residential’ is made up of a ‘multi-family’ segment, which is -27.1% ytd, and a ‘single-family’ grouping, which is +5.7%. Single-family construction is offering a great deal of support for the overarching construction marketplace.

(4) There are several reasons single-family residential starts are relatively buoyant at present.

(a) For potential new home buyers who have retained their jobs, good earnings growth and a big jump in the savings rate are facilitating the accumulation of down payments. Since there are now fewer things to spend one’s money on (e.g., no concerts, less dining out, etc.), the savings rate has doubled from its long-term average of about 8.0%.

(b) Working from home and other factors have caused an increase in mobility. Many individuals and families, especially among the millennial generation, are turning their backs on ‘dense’ high-rise living in urban cores in favor of ‘social distancing’ in the suburbs. Plus, there is another broad trend that has people on the move. As the negative effects of climate change become more prevalent, wildfires and hurricanes are inspiring an exodus from Atlantic, Pacific and Gulf coastal regions towards the interior of the country. This will pick up more steam as homeowners find it harder and/or costlier to obtain insurance coverage.

(c) Mortgage rates are in an all-time bargain range. The 30-year fixed rate has dropped below 3.00%. There’s a tremendous opportunity to lock in cheap financing for the considerable pent-up housing demand that has accumulated over the past ten years.

(5) With respect to residential construction longer-term, though, there are a couple of caveats emanating from the demographic quarter. Population growth in the United States has been slowing markedly, venting the pressure on new needs for dwelling space. Much of the decline originates in reduced arrivals of foreign temporary workers and students. Both categories of non-permanent immigration normally account for a high level of rental housing activity.

(7) How has the current year compared with last year for mega projects? From January to October as a subset of full year 2019, there were 29 mega project starts for $72 billion. From January through October of this year, there have been only ten mega project groundbreakings, summing to $17 billion. Therefore, by number, the decline in 2020 has been 10/29 = -66% (less by one-third). By dollar volume, the drop has been $17b/$72b = -76% (minus three-quarters).

(9) In 2019, the biggest dollar volume projects were mainly in the realm of engineering works—i.e., rapid transit, power, and refinery/petrochemical—with little or no accompanying square footage. In 2020, there have been giant battery and steel plant projects and huge warehouse facilities for the likes of Amazon, Apple, Facebook, Google, and others. Industrial plants and distribution and fulfillment centers are built with low dollars per square footage. They don’t necessarily make it into the ‘mega’ category when the benchmark is $1 billion or more.

(10) Normally, at this point in the Nuggets report, I would comment on the latest Canadian housing starts figures, but CMHC has announced that from now on, it will be pushing back its reporting by several days. In this instance, that means October results won’t be available until November 17th, past my deadline.

In other news, the U.S. Conference Board’s Consumer Confidence Index declined slightly in October to 100.9 from 100.3 in September (with 1985 = 100.0). Consumer confidence is neither inordinately exuberant, nor shockingly distressed. And the Purchasing Managers Index (PMI) of the Institute for Supply Management (ISM) has climbed to an elevated and encouraging 59.3% from 55.4% in the previous month.

The manufacturing sector is expanding with vigor. But circling back to my opening comments, the pandemic and the uncertain political landscape heighten the risk for anyone tasked with making bold assertions about economic prospects.

A mega-sized construction project has a dollar value of $1 billion or more.

BUT HERE’S SOMETHING REALLY INTERESTING…

Let’s reset the definition of a ‘mega’ project to be one million square feet or more.