As with most things pandemic-related, it’s hard to know where the cost of construction will land six months, or a year, or two years from now. Set out below are 10 ways in which costing in the sector is likely to be impacted in the period ahead. 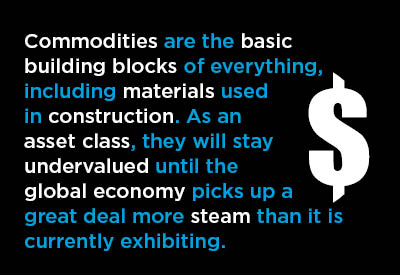 A Commodities Dependency for Materials

(1) Commodities are the basic building blocks of everything, including materials used in construction. As an asset class, they will stay undervalued until the global economy picks up a great deal more steam than it is currently exhibiting. Over the past two decades, China has embarked on several massive infrastructure spending programs that have drawn in nearly half of world copper, nickel, iron ore (for steel), aluminum, and cement/concrete supplies.

To kick-start its economy again, after a coronavirus-induced shutdown early this year, China has announced it will initiate another round of infrastructure spending. This time, though, most of the focus won’t be on building roads, transit projects, railways, and airports. Instead, majority funding will go towards boosting the high-tech sectors expected to lead future gross domestic product growth. The emphasis will be on data centers, biotechnology, and medical labs, etc.

(2) A U.S. economic upturn, especially if residential construction is a primary driver, will have a significant impact in a couple of commodity pricing areas, primarily lumber and gypsum.

(3) Also, the administration in Washington has been speaking of imposing restrictive trade measures against some countries in a couple of areas, aluminum and steel. Quotas on imports, or new tariffs, will add to costs.

(4) Helping to keep costs down presently, however, is the low international price for crude oil, which has flow-through benefits throughout the construction sector due to widespread consumption of gasoline and diesel fuel.

A Demography Dependency for Labor

(5) Many older workers, advised to ‘shelter at home’ during the pandemic, must presently be pondering if they should ‘take a hint’ and retire. If there are retirements en masse, the younger workers hired as replacements will come onboard at a lower wage scale.

(6) Of course, there may be an opposite effect. To retain the expertise of older workers, who have acquired skills and accreditations not yet achieved by ‘new blood,’ incentives in the form of bonus pay and/or other perks may be required.

(7) With respect to overall construction costs, a significant trend underway has the lowering of costs as its specific goal, i.e., what’s known as modular or prefab or tilt-up construction. A previous failing of ‘modular’ has been largely overcome. ‘Modular’ used to imply a limited number of ‘cookie cutter’ designs. Laser cutting tools and other high-tech advances now facilitate a degree of customization not seen before.

Turning construction into a manufacturing activity expands the hiring base. Being employed at a fixed job site indoors rather than having to travel somewhere that is outdoors, possibly in the cold of winter or the heat of summer, is viewed as preferable by many potential workers.

Modular construction also opens the way for wider usage of robotics, sidelining the need for some labor functions altogether.

(9) The extreme buildup of government debt taken on to combat the negative economic consequences (e.g., in terms of job and income losses) of the current health crisis guarantees extra expenses tied to tax increases. Government at all levels must eventually try to reclaim portions of their financing shortfalls through hikes in sales, property, and income taxes, and by means of licensing and permitting fee increases.

(10) Bankruptcies prevail up and down the construction supply chain. At least initially, there will be cutthroat bidding in aid of survival. Longer term, with fewer firms in the sector, but a return nearer previous volumes of work, opportunities will arise to be pickier about what jobs to take on, with those judged likely to yield higher profitability having precedence.

Should All Construction Be Essential During the Coronavirus Pandemic? Read this Blog Post