The times are turbulent. There’s no point in dilly-dallying. Let’s jump right in with an examination of the latest data releases from public and private sector sources. 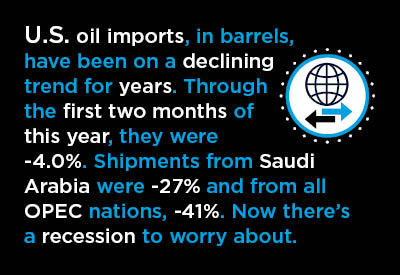 March’s U.S. Advance Monthly Sales of Retail and Food Services report sets out some big month-to-month percentage changes. Most, but not all, were on the downside.

Moving decisively in the other direction was the subcategory ‘food and beverage stores,’ +25.6%. People have clearly been stocking up to carry themselves through mandated stay-at-home days, and to avoid having to replenish too often. Rumors about developing shortages in some product areas (e.g., toilet paper) have also sparked buying sprees.

Other shopkeepers with increases in m/m sales were ‘general merchandise stores,’ +6.4%, and ‘building material and garden equipment dealers,’ +1.3%. Delivering a surprisingly tepid result was the designation, ‘nonstore retailers,’ only +3.1% m/m, although +9.7% year over year. Nonstore retailers sell over the internet or by means of online auctions.

Note that in Graph 1, the percentage changes are y/y rather than m/m.

A Forewarning for the U.S. in Canada’s March Labor Market Numbers

The latest labor market reports for the U.S. and Canada warrant further commentary. U.S. results were muted because the survey figures came from a time in the month before the huge drop-off in employment. The Canadian numbers on jobs and unemployment were plucked from their sample population about a week later in March.

Canada’s March employment numbers lead in forewarning about what is to come for workers in both countries in the weeks and months ahead.

Graph 2 highlights the extreme increase in the not seasonally adjusted (NSA) unemployment rate north of the border in just one month. Almost all the improvement in the jobless rate over the past decade, since the 2008-2009 recession, has been wiped out, and seemingly overnight.

The Canadian ‘R-3’ unemployment rate that is featured in Graph 1 is calculated using the same tough assessment about who is truly looking for a job as is adopted in the U.S.

The curves in Graph 3 appear much smoother because the data has been seasonally adjusted (SA). Once again, though, the steep climb in Canada’s unemployment rate, ahead of the U.S. result, is readily apparent.

The latest data points are for March 2020.
"Year over year" is the monthly figure versus the same month of the previous year.
Data sources (seasonally adjusted): Statistics Canada and U.S. Bureau of Labor Statistics (Department of Labor).
Chart: ConstructConnect.

The latest data points are for March 2020.
"Year over year" is the monthly figure versus the same month of the previous year.
Data sources (seasonally adjusted): Statistics Canada and U.S. Bureau of Labor Statistics (Department of Labor).
Chart: ConstructConnect.

Graphs 2 and 3 set out unemployment rates as levels. Graph 4 shows levels of full-time and part-time work as year-over-year percentage changes.

The number of full-time jobs in Canada in March 2020 fell year over year, by -1.5%, but that small degree of decline won’t send anyone howling into the woods.

The bite taken out of the number of part-time jobs nation-wide, however, has been quite another matter. The part-time employment rollback has been -15.5% y/y.

Young adults staffing hotels, bars, and restaurants have been in the midst of most of the carnage.

Graph 4: Change in Full-Time Versus Part-Time Employment in Canada

The latest data points are for March 2020.
"Year over year" is the monthly figure versus the same month of the previous year.
Data source (seasonally adjusted): Statistics Canada.
Chart: ConstructConnect.

U.S. oil imports, in barrels, have been on a declining trend for years. Through the first two months of this year, they were -4.0% (Graph 5). Shipments from Saudi Arabia were -27% and from all OPEC nations, -41%.

Now there’s a recession to worry about. America’s total demand for oil is already sliding, as proven by fill-up prices at the gas pump. A full tank costs half what it did a year ago.

Provided domestic shale oil producers can manage stay in business, the proportionate cut in oil imports will be greater than the total loss of demand.

Over the past two decades, the roles played by Saudi Arabia and other OPEC nations in satisfying U.S. total oil demand have been greatly diminished. In 2020, their contributions may all but disappear.

The sum of the last 4 weeks has been 22.0 million. At least there has been some minor decrease from week to week in the two latest reporting periods.

There isn’t an exact correlation between four weeks’ worth of initial jobless claims and the unemployment statistics as appearing in the monthly Employment Situation report from the Bureau of Labor Statistics.

When a worker’s terms of employment with a company have been adjusted from full-time to part-time, he or she can apply for ‘partial’ unemployment insurance assistance.

Hence, they’re not unemployed on the one hand, but they’re a new jobless coverage seeker on the other.