With private investment, particularly in nonresidential structures, and net exports of goods and services acting as drags, U.S. ‘real’ (i.e., adjusted-for-inflation) gross domestic product (GDP) growth turned in a relatively quiet performance in 2019’s Q3, +2.1% annualized. The +2.1% result was the tiniest bit better than Q2’s +2.0% but was a slowing from Q1’s +3.1%. 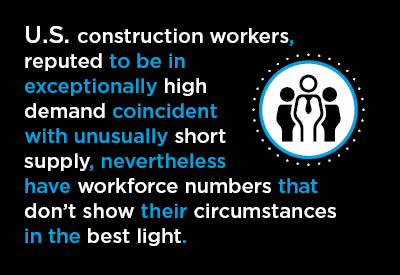 Personal consumption expenditures (PCE), which now account for more than two-thirds of GDP, continued to rise faster than total output in Q3 (i.e., +2.9% for PCE versus +2.1% for GDP), but the margin of difference diminished considerably from the previous quarter (i.e., in Q2, PCE was +4.6% to GDP’s +2.0%).

The latest figures on U.S. retail spending (which is a major portion of PCE) are not as encouraging as one might hope. The widely-followed data-set that analysts jump on each month is found in the Census Bureau’s publication Advance Monthly Sales for Retail and Food Services. ‘Total retail alone’ spending in November was +3.1% year over year. The benchmark for good strength in such spending is +5.0%. As for expenditures at ‘food services and drinking places’, they were more boisterous at +5.1% y/y.

Graph 1 shows the sub-categories of total retail spending. Only three sub-categories beat the +3.1% gain for ‘total retail alone’: ‘non-store retailers’, +11.5%; ‘motor vehicle and parts dealers’, +4.9%; and ‘sporting goods, books and hobby’ stores, +3.4%. Eight other sub-categories recorded y/y sales of less than +3.1% and four of the eight were ‘in the red’. ‘Clothing and accessory’ stores fell furthest behind, -3.3%.

As confirmed by November’s +11.5% y/y climb in sales made by non-store entities, the Internet has become a formidable force in the retail landscape. In case the scope of the Internet’s reach is still underappreciated, there’s a new milestone that warrants mention.

A year ago, revenues generated by Internet platforms and e-auction houses overtook ‘general merchandise’ stores. More recently, it’s been the turn of traditional ‘food and beverage’ stores to be surpassed by Internet sellers. The share of total retail sales originating outside ‘bricks and mortar’ locations has risen to 14.7%, ahead of ‘food and beverage’ stores at 14.1%.

Among sub-segment markets, non-store retailers now account for the second largest share of total retail. In first place, still with a commanding lead, are ‘motor vehicle and parts’ dealers. The lower portion of Graph 2 shows the auto sector’s share of total retail being close to one-quarter (23.1%), although the slope of the curve has leveled off over the last four years. The flattening has occurred after a significant climb from 2012 through 2015.

From the upper portion of Graph 2, year-over-year motor vehicle and parts sales have been consistently positive for a decade, with one short-lived exception in the fall of 2018. From September to November 2018, they briefly turned negative before getting back on a winning track. In the latest month, November 2019, they were +4.9% y/y.

U.S. construction workers, reputed to be in exceptionally high demand coincident with unusually short supply, nevertheless have workforce numbers that don’t show their circumstances in the best light. For example, while the NSA unemployment rate curve in Graph 3 continues to be extremely low, the SA employment curve has still not quite risen to the same level as its prior before-recession peak. Furthermore, the angle of its upwards tilting slope appears to be flagging.

But it’s the content in Graph 4 that is the true shocker. Graph 4 highlights year-over-year hourly compensation changes for jobs economy-wide and within the construction sector (i.e., as a subset of ‘all jobs’). Since the beginning of 2019, average hourly earnings for ‘all jobs’ have been mainly increasing and now sit at +3.7% y/y. Average y/y hourly earnings paid to construction workers, however, have been mostly receding and presently register at only +2.0%.

In December of last year, North America’s major stock market indices punished investors with dramatic declines. At that time, the interest rate environment was turning ‘hawkish’, with yields on the rise. But in the early part of 2019, the Federal Reserve reversed course and a new overriding concern took over, anxiety about the deleterious effects of the trade war with China.

Most recently, with President Trump announcing a Part 1 trade agreement with Beijing, and a hold being place on further tariff hikes, and with Boris Johnson gaining a handy majority in the U.K. election, providing more clarity concerning Brexit, stock market activity has heated up again.

The U.S. manufacturing sector continues to struggle. November’s purchasing managers’ index (PMI) reading of 48.1%, from the Institute for Supply Management (ISM), was below 50.0% for the fourth month in a row. A figure less than 50.0%, but greater than 42.9%, indicates expansion in the overall economy but contraction in manufacturing. A PMI level of 48.1% has historically corresponded with real GDP growth of +1.5% annually (i.e., even lower than Q3’s recorded actual gain of +2.1%).

Graph 6 shines a spotlight on the one province, Ontario, that is standing out from all the others at present with respect to labour markets. Ontario is the only jurisdiction that is among the leading provinces for both low unemployment rates and fast jobs growth. Hiring in Ontario has accounted for 80% of the year-over-year increase in the total number of jobs nationally.

It’s been noted before in these Nuggets reports that monthly Canadian housing starts, annualized, have been hovering around 200,000 units for an extended period of time, going back to 2010. In October and November of this year, the streak continued. Both months recorded annualized levels of 201,000 units.

Among Canada’s six most populous cities, there’s been quite a diversity of year-to-date housing starts performances. Compared with January-November 2018, Vancouver (+21%) and Ottawa-Gatineau (+16%) have been reaching for the heights; Montreal (+7%), Edmonton (+6%) and Calgary (-6%) have been trekking along the middle ground; and Toronto (-24%) has been in the doldrums.