ConstructConnect announced today that the latest month’s volume of construction starts, excluding residential work, was $32.6 billion (green shaded box, Table 3 below), an increase of +2.3% versus March’s figure of $31.8 billion (originally reported as $30.8 billion).

Amidst so much bad economic news, arising from the coronavirus pandemic, the slight increase in nonresidential starts month-to-month strikes a sweet chord. With winter being left behind, April is the time of year when on-site building activity normally perks up nicely. Some of that usual springier step was apparent even in the current extraordinary circumstances. 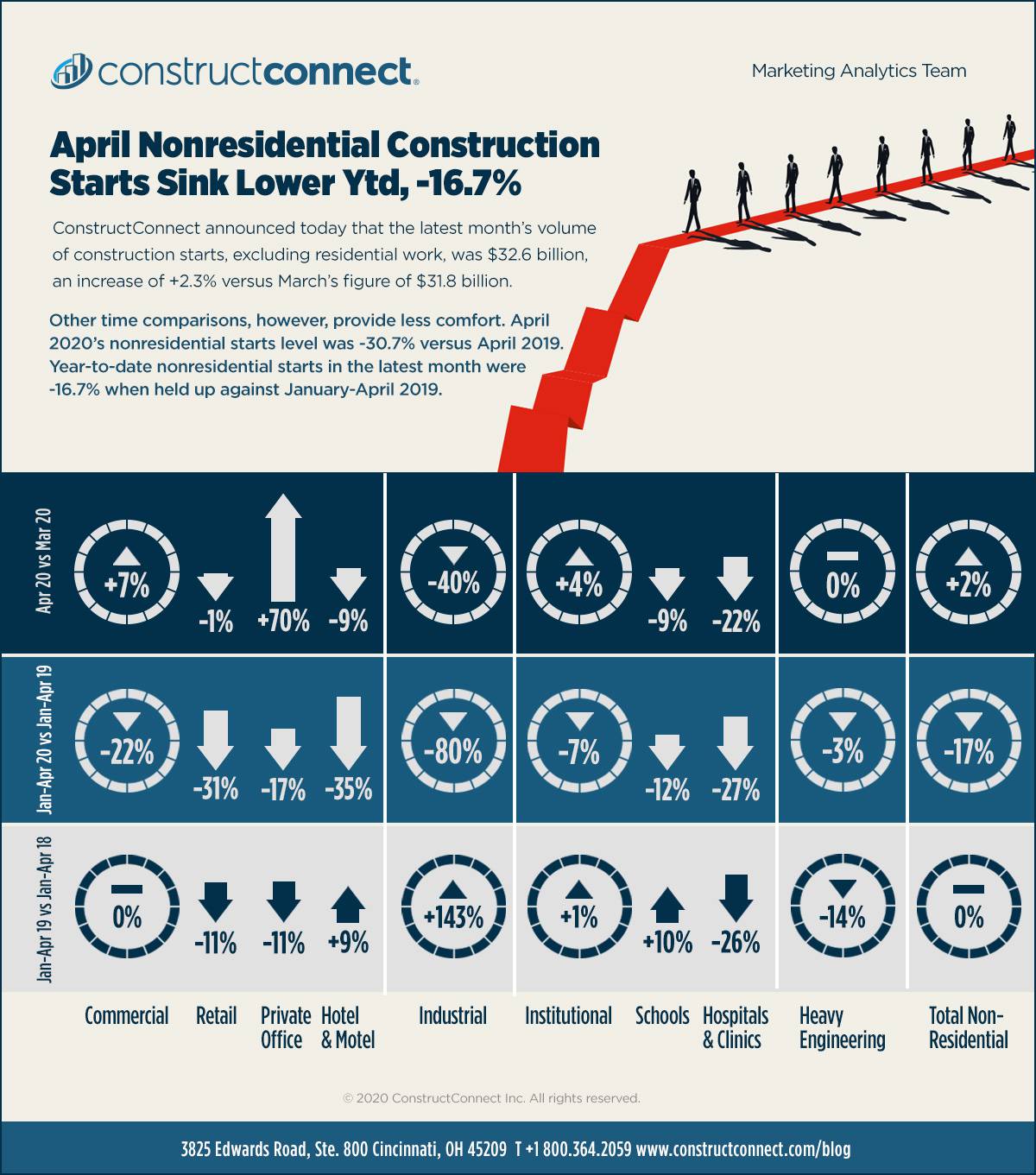 Repercussions From Shutting Down the Economy

In April, the severe repercussions from shutting down the economy became glaringly apparent in the nation’s labor market statistics. A never-before-seen slide in jobs of 20.5 million made previous charts on month-to-month change worthless. Graph 1 shows an old graph inside a new one, where the vertical scale has needed a many-fold expansion.

In a single month, the seasonally adjusted unemployment rate deteriorated from a quite healthy 4.4% to a deeply distressed 14.7%. It would have been 18.0%, if the participation rate hadn’t retreated, month to month, from 62.7% to 60.2%. Close to 7 million individuals stopped looking for work in April, since they had no expectation of success, and were removed from the labor market roster.

The slide in U.S. construction employment in April was one million jobs. From Graph 2, the decline in total U.S. employment in the latest month took away 95% of the increase that occurred from the depths of the 2008-09 recession through the first quarter of this year. The construction sector, as a subset of total jobs, also recorded a huge decline in April, but to a degree that was a bit less than half the climb subsequent to the Great Recession.

Construction’s not seasonally adjusted (NSA) unemployment rate in April shot up to 16.6% from 6.9% in March and a tight-for-the-sector 4.7% in April 2019. Construction activity has been judged ‘essential’ in almost all states since the onset of the health crisis two months ago. Instances of sitework shutdowns have proven relatively temporary. Also, construction appears prominently among lists of industries considered okay for Phase 1 economy reopenings.

Graph 3 highlights where layoff pain has been most wretched in the early days of the pandemic. Employment in the ‘leisure and hospitality’ sector (hotels/motels, restaurants, and bars) plummeted -47.2% year over year in April. No other sector has come even close to that kind of jobs contraction. Young adults, especially, in hospitality and accommodation services have felt the lash of forced closures to halt COVID-19’s rampant advance. Construction’s jobs shrinkage of -11.2% y/y has been better than the ‘total jobs’ decline of -12.9%. Worth noting, also, is that construction has done comparatively better than the private services-providing portion of the overall economy (-15.3% y/y).

April 2020’s month-to-month increase of +2.3% in total nonresidential starts received support from both commercial and institutional work, +7.2% and +4.4% respectively. The commercial sub-categories with particular lift were ‘private office buildings,’ +69.6%, and warehouses, +42.5%.  Among the Top 10 projects for the month (Top 10 Project Starts in the U.S. - April 2020) are a Salesforce office tower in Chicago and two enormous (by square footage) distribution centers, one in Texas (for Amazon) and the other in New York (Project Eagle).

There have been several type-of-structure subcategories that have managed to achieve year-to-date increases in starts. Reading from top to bottom in Table 1, those with significant dollar volumes include: ‘government office buildings,’ +14.0%; ‘fire/police/courthouse/prisons,’ +34.6%; ‘military’, +231.7% (Geospatial Intelligence Agency Headquarters; see page 5); ‘road/highway,’ +4.1%; ‘dam/marine,’ +104.5%; and ‘miscellaneous civil,’ +17.7%.

The problems for construction this year will come from many sources: widespread job and income losses throughout the economy that will cut into retail spending and office occupancy; manufacturing shutdowns and capacity utilization rate reductions that will eliminate the need for square footage additions; demand and pricing setbacks for commodities that assure fewer mega project initiations; and government revenue shortfalls that will put a question mark beside infrastructure build-out plans.

Governments are running up enormous debt at the same time as inflow taps are being tightened on income, corporate, property, and sales taxes. Plus, there are other sources of government revenue now being strained. For example, it’s hard to ring up decent fuel tax receipts when so many cars, trucks, and buses are staying parked in warehouses, garages, and driveways.

The Nonresidential Construction Starts Trend Graphs - April 2020 showcase six graphs featuring 12-month moving averages for a dozen type-of-structure categories. The lines in all the graphs, except for ‘roads/highways’ and ‘water/sewage,’ are either continuing to trend along downward pathways or have recently turned in that direction.

Caution must be exercised in interpreting the graphs. Economic circumstances have changed overnight. April results comprise only one-twelfth of the latest moving average calculations. The graphs will be heavily influenced by pre-COVID-19-crisis conditions for some time.

Tables B-3 and B-8 of the monthly Employment Situation report record average hourly and average weekly wages for industry sectors. B-3 is for all employees (i.e., including bosses) on nonfarm payrolls. B-8 is for ‘production and non-supervisory personnel’ only (i.e., it excludes bosses). For ‘all jobs’ and construction, there are eight relevant percentage changes to consider.

In April, from BLS Table B-3 (including supervisory personnel), ‘all-jobs’ y/y earnings more than doubled versus March, reaching +7.9% hourly and +7.3% weekly. The surge was facilitated by the disappearance of many lower-paying jobs. Plus, many workers who remained in key positions providing essential services received incentive, bonus, and danger pay supplements. Construction workers (from Table B-3) received +2.4% hourly, but -1.2% weekly.

Table 1 conforms to the type-of-structure ordering adopted by many firms and organizations in the industry. Specifically, it breaks nonresidential building into ICI work (i.e., industrial, commercial, and institutional), since each has its own set of economic and demographic drivers. Table 2 presents an alternative, perhaps more user-friendly and intuitive type-of-structure ordering that matches how the data appears in ConstructConnect Insight.