ConstructConnect announced today that the latest month’s volume of construction starts, excluding residential work, was $31.4 billion (green shaded box, Table 4 below), a little better than flat (+1.2%) versus July’s figure of $31.0, originally reported as $28.6 billion. The sizable positive revision to the previous month’s number was due to about evenly spread increases in warehouse, bridge, power, and marine work.

August 2020 versus August 2019 nonresidential starts were -43.3%. But 2019 was an exceptional year for ‘mega’ project starts (i.e., projects valued at $1 billion or more each). In 2019, there were 35 mega projects summing to $79.1 billion. August 2019 was last year’s best month for mega projects (although it only just beat May), providing five such groundbreakings totaling $18.7 billion.  The dollar volume difference between total nonresidential starts in August of this year versus the same month of last year was $24.0 billion. The shortfall of $24.0 billion was almost entirely due to the much stronger mega project profile last year. 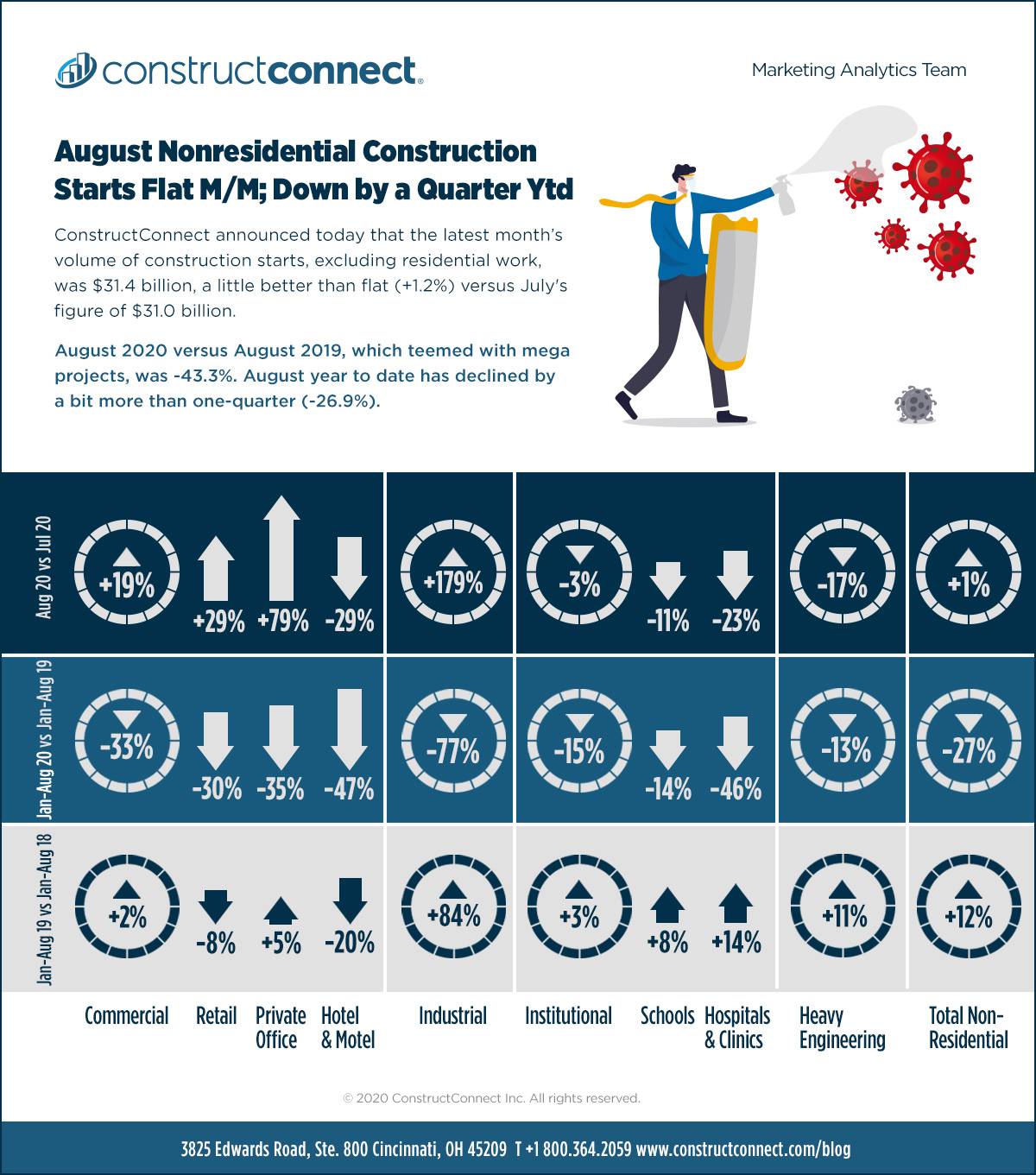 Year-to-date total nonresidential starts in the latest month were -26.9% compared with the same January-August period in 2019. The -26.9% change is tracking closely ConstructConnect’s -23.5% latest forecast for the full year. Year-to-date ‘actual’ nonresidential building starts are -34.4%, a little worse than the -29.7% change forecast for the full year. For ‘civil’ work, the actual year-to-date change is -12.9% compared with a -12.4% full-year projection. And the grand total percentage changes are -20.4% for ytd ‘actual’ versus -21.3% for full-year forecast. 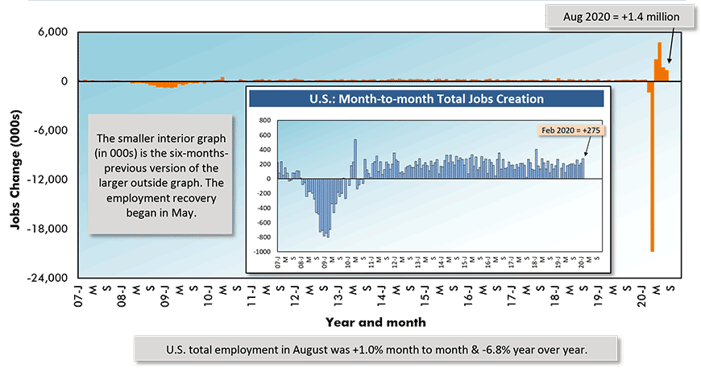 Construction Has Reclaimed 56% of Jobs Lost in Spring

In March-April of this year, as originally reported, total employment in the U.S. fell by 20.5 million jobs, a decline of -13.5% (Table 1). The rearing up of the coronavirus contagion was, of course, the culprit. Since April, nearly nine million jobs have been reclaimed. Therefore, the jobs recovery-ratio, or the jobs ‘claw-back’ ratio (which has a feistier sound to it) is 43.8%.

While a good first stride has been taken in winning back the employment loss, 43.8% is still less than half the gap. Moreover, a rising proportion of remaining jobs losses are now being described as permanent rather temporary.

A Recovery Described as ‘Uneven’

Graph 2 shows that on a year-over-year employment basis, construction (-3.9%) has fared fourth best among all major industrial sectors. It’s behind only ‘financial activities’ (what was, until recently, a booming stock market), ‘government’ (the epitome of job security) and ‘retail trade’ (thanks to online purchases and grocery store sales).

No doubt, though, the most alarming employment performance continues to be in the ‘leisure and hospitality’ sector, where jobs are -23.2% year over year. The word now being used most often to describe the recovery, as the economy’s various subsector components proceed along their individual paths, is ‘uneven.’

The Census Bureau’s total put-in-place (PIP) construction spending dollars in July were +4.2% year to date. The seeming strength in the PIP results are an illusion. PIP numbers essentially capture work-in-process payments. They include a lot of carryover work that was initiated at least a year ago (i.e., the heightened mega project activity in 2019 that was alluded to earlier.)

Total PIP construction spending in the latest three reported months (i.e., to July), versus the preceding three months, annualized (projected for a full year), was -14.9%.

Also sounding a note of caution, total employment in the U.S. economy rose by 1.4 million jobs in August, but the construction sector’s latest month-to-month employment climb was only +16,000. There’s a looming threat that builders may soon burn their way through their backlogs. Much hope is being placed in the notion that an upsurge in housing starts will come to the rescue.

All Major Types of Nonresidential Construction Being Challenged

August’s +1.2% month-to-month (m/m) minor increase in total nonresidential starts resulted from gains in industrial (+179.1%) and commercial (+18.5%) that offset a sizable drop in heavy engineering/civil (-17.0%) and a small pullback in institutional (-2.5%). Industrial’s big jump was due to the month’s one mega project, a GM battery manufacturing plant, tied to electric vehicle sales, in Ohio (see Top 10 Project Starts in the U.S. - August 2020).

The two nonresidential type-of-structure subcategories with the highest dollar volumes of starts so far this year have been ‘school/college’ ($48.7 billion) and ‘road/highway’ ($45.8 billion). The former has accounted for 62% of institutional starts ytd; the latter, for 41% of engineering.

With only one exception (‘water/sewage’), the twelve-month moving average trend-line curves (Nonresidential Construction Starts Trend Graphs - August 2020) are moving downwards, some markedly so more than others. The type-of-structure subcategories where ‘starts’ presently appear to be in most distress are ‘retail,’ ‘private office buildings,’ and ‘miscellaneous civil.' ‘Schools/colleges’ and ‘hospitals/clinics’ are also clearly moving in the wrong direction. The recent dips in ‘roads/highways’ and ‘bridges’ are little more than hiccups for now, with possibly more momentous movements still to be revealed.

August 2020’s y/y results for three BLS Producer Price Index (PPI) series were as follows: ‘construction materials special index,’ +2.0% (up from July’s +0.2%); ‘inputs to new construction index, excluding capital investment, labor, and imports,’ +1.3% (compared with -0.3% in July); and ‘final demand construction,’ +1.8% (down from +2.1% in July). While material costs may be on the march, it would seem fewer projects are driving tighter bidding.

2020’s H1 Nonresidential Construction Starts Down by Nearly a Quarter