The world changed, but most of us didn’t know it, last December when the novel coronavirus hopped from an animal host to a human carrier in Wuhan, China. 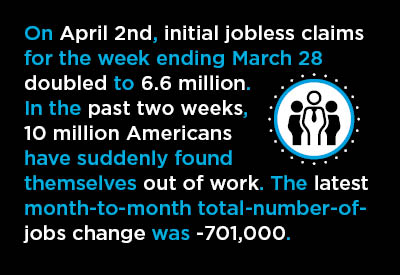 It changed again, in an economic sense, on March 26, just a little more than a week ago. March 26 was when the U.S. initial jobless claims figure for the week ending March 21 soared by 3.0 million.

Sure, there had been stock market turbulence during the several weeks before, but one day’s steep drop was followed by another day’s semi-recovery. Plus, not everybody has a stake in, nor avidly follows, share prices.

But on March 26th, it was revealed that 3.3 million Americans had, for the first time, applied for unemployment insurance. Such a staggering number, given that its peak level during the Financial Crisis was 670,000, made glaringly obvious that big holes were about to be torn in personal incomes and finances.

Then a week later, on April 2nd, initial jobless claims for the week ending March 28 doubled to 6.6 million. In the past two weeks, 10 million Americans have suddenly found themselves out of work.

Inevitably, the monthly Employment Situation reports prepared by the Bureau of Labor Statistics (BLS) are going to be delivering bad news. It wasn’t clear, though, that this would begin with March’s report. The two chief labor market surveys, of householders and employers, are usually carried out around the 12th of the month. In these fast-changing times, March 12th seemed early to capture the latest real-time devastating events.

Over the past 10 years, the U.S. economy has generated, on average, +185,000 new jobs per month or +2.2 million new jobs per year. Latest data point is for March, 2020.
Data source: Payroll Survey, U.S. Bureau of Labor Statistics (BLS).
Chart: ConstructConnect.

With Revisions, Three Quarters of a Million Jobs Lost in March

Well, now we have the answer. The latest month-to-month total-number-of-jobs change, as recorded in March’s Employment Situation report was -701,000.

Furthermore, there were revisions downward to previous months’ data. If the total jobs count for March is compared with what was previously reported for February, the employment shift has been minus three quarters of a million (-758,000).

The latest Employment Situation report reveals where the first waves of job losses have occurred. Sadly, there will be plenty more layoffs, extending into other sectors, to come.

The ‘education and health’ sector has cut staffing by -76,000 jobs, with ‘health’ alone at -43,000. This seems counterintuitive based on the need for medical professionals to care for COVID-19 patients. Where it stems from, though, is the closure of walk-in clinics and dentistry offices. Jobs with hospitals have stayed level.

The ‘professional and business services’ sector has slashed 52,000 jobs, with a 50,000 decline among firms offering ‘temporary help services.’ Some companies are shifting full-time workers to part-time status, but only a few (e.g., in online sales, fast food, and grocery delivery, etc.) are taking on new help.

‘Retail,’ which has already experienced some periods of severe personnel cuts, dropped 46,000 workers in March.

But the hardest hit sector, by far, was ‘leisure and hospitality,’ -459,000 jobs in a one-month span. Your local ‘watering hole’ was especially vulnerable. The jobs count at ‘food services and drinking places’ in the latest month was down by 417,000.

Three Sectors With Steady Employment, But Watch Out

Three sectors kept employment about even in March: ‘transportation and warehousing,’ ‘financial services,’ and ‘information services.’

‘Transportation and warehousing’ includes ‘air transportation’ which is losing business at an alarming rate. Significant job losses are sure to come.

‘Financial services’ includes ‘real estate,’ where transactions are being slowed by stay-at-home guidelines that limit visits to listed resale properties and model homes.

A 29,000-Jobs Contraction in Construction Employment

Earnings among nonsupervisory construction workers in March were about in line with general price inflation, +2.6% year over year for average hourly earnings and +2.1% for average weekly earnings. The comparable compensation gains for all jobs in the economy were +3.4% y/y and +2.5% y/y.

By the way, the national economywide and seasonally adjusted (SA) unemployment rate in March increased to 4.4% from 3.5% in February, but there’s no point in dwelling on it. It has a lot more climbing to do in the months ahead.