In September, the U.S. economy experienced a fourth month of slowing jobs increase. In other words, new jobs creation decelerated. North of the border, according to Statistics Canada, there was an improvement in hiring (or rehiring) in the latest month, versus the period before (+378,000 compared with +246,000), bringing a little more excitement to the recovery party (Graph 1). 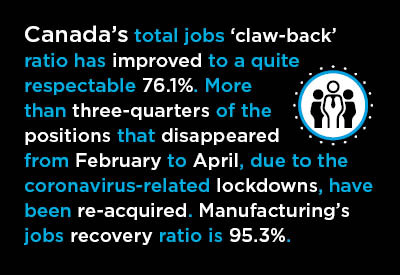 Canada’s total jobs ‘claw-back’ ratio has improved to a quite respectable 76.1% (Table 1). More than three-quarters of the positions that disappeared from February to April, due to the coronavirus-related lockdowns, have been reacquired.

Canadian manufacturing’s jobs recovery ratio is an impressive 95.3%. Canadian auto manufacturers decided to forego their usual summer shutdowns this year. Also, there has been expanded production of personal protective equipment (PPE) to combat the health crisis.

Also standouts in the final column of Table 1 are the employment claw-back ratios of 91.1% for part-time work and 124.0% for public sector staffing. On the heels of a +3.8% increase in hiring month-over-month in September, mainly in the field of education, there are presently +1.9% more people working for Canada’s government sector now than there were a year ago.

From Graph 2, Canada’s ‘headline’ unemployment rate of 9.0% in September does not show well when compared with the 7.9% figure for America. But the seasonally adjusted (SA) ‘headline’ rate is not an ‘apples-to-apples’ comparison. The U.S. is stricter in assessing who among out-of-work individuals is trying their darndest to be hired somewhere.

When the Canadian number is adjusted to match U.S. calculation methodology, the not seasonally adjusted (NSA) results align closely, as can be seen in Graph 3. On an NSA same methodology basis, Canada’s September jobless rate of 7.3% was a little under the 7.7% level for the U.S.

Returns From the Depths for Canadian Manufacturing and Construction

From Graphs 4 and 5, similar pictures emerge for two key sectors within the Canadian and U.S. economies. The year-over-year jobs collapses this past Spring in both manufacturing and construction were far more severe in Canada than in the U.S.

For Canada, the year-over-year jobs drops were -18% for manufacturing and -20% for construction. Remember that Quebec, and Ontario to a lesser extent, took hard line stands for a while against work proceeding at construction sites.

Since April, year-over-year employment in Canadian manufacturing and construction have sprung back nicely, although it’s fair to say that the former has made a more impressive return from the depths than the latter.

The latest data points are for September, 2020.
"Year over year" is the monthly figure versus the same month of the previous year.
Data sources (seasonally adjusted): Statistics Canada and U.S. Bureau of Labor Statistics (Department of Labor).
Chart: ConstructConnect.

The latest data points are for September, 2020.
"Year over year" is the monthly figure versus the same month of the previous year.
Data sources (seasonally adjusted): Statistics Canada and U.S. Bureau of Labor Statistics (Department of Labor).
Chart: ConstructConnect.

From Graph 6, the number of Canadian part-time positions sank by -30% y/y in April. Full-time postings, in their direst moment, were -12% y/y. The federal government stepped in with income supplement plans to provide support for the consumer spending that is the backbone of gross domestic product (GDP).

By September, with the rebound in part-time jobs on steroids, the year-over-year shortfall in both full-time and part-time work was almost equal, at or near -3.5%.

Graph 6: Change in Full-time versus Part-time Employment in Canada

The latest data points are for September, 2020.
"Year over year" is the monthly figure versus the same month of the previous year.
Data sources (seasonally adjusted): Statistics Canada
Chart: ConstructConnect.

The latest data points are for September, 2020.
"Year over year" is the monthly figure versus the same month of the previous year.
Data sources (seasonally adjusted): Statistics Canada
Chart: ConstructConnect.

As an aside, five of Canada’s six largest urban centers—i.e., the ones with populations exceeding a million—are currently recording unemployment rates that are in double-digit percentages. The nation’s capital, Ottawa-Gatineau, is the lone Canadian metropolis with an unemployment rate below 10.0%. 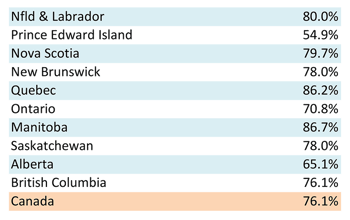