Canada’s total jobs count climb in August was +246,000, which wasn’t as high as in July or August, +419,000 and +952,000 respectively. Nevertheless, the month-to-month percentage change was +1.4%, which was better than the +1.0% advance that was achieved in the U.S. The latest numbers come from Statistics Canada’s August Labour Force Survey. 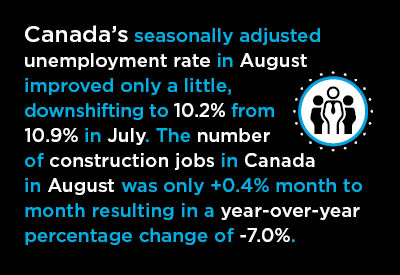 The U.S. ‘tough love’ methodology is rigorous in counting, as among the unemployed, only those individuals who are trying hard to find work (i.e., not workforce members who are ambivalent on the subject).

Most interesting is to consider the proportions of the enormous jobs losses (total and by sector and by age cohort) from February to April of this year that have been recovered. February to April was when the economy was in lockdown to combat COVID-19’s spread.

Lower coronavirus infection and mortality rates north of the border have allowed Canada’s economy to reopen in smoother fashion, with fewer fits and starts from regional and intermittent flare-ups, than in the U.S.

Furthermore, it’s not as if Canada’s February-to-April total jobs decline was less severe than America’s. In fact, on a percentage-change basis, it was more drastic, -15.7% to -13.5%. 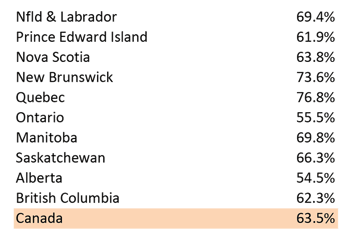 The number of construction jobs in Canada in August was only +0.4% month to month, resulting in a year-over-year percentage change of -7.0%, worse than the comparable U.S. figure of -3.9%.

Private sector employment in Canada pulled ahead by +1.5% m/m in the latest month and now sits -6.4% y/y. Public sector employment in August increased by a tepid +0.7%, but on a year-over-year basis, it’s only -1.1%. Government jobs have been by far the most secure during the pandemic.

As in the U.S., the sector continuing to account for the biggest shortfall in jobs relative to February pre-COVID-19 days is ‘accommodation and food services’ (known as ‘leisure and hospitality’ south of the border), -21.3% (-19.7% y/y from Table 3). Nor is it a coincidence that the gap in employment among 15-to-24-year-olds in Canada is stunningly outsized, -15.3%. Bar and restaurant and hotel/motel payrolls are heavily weighted towards young people.

In July, Canada Added Less Than Half of June’s Jobs Increase Read this Blog Post