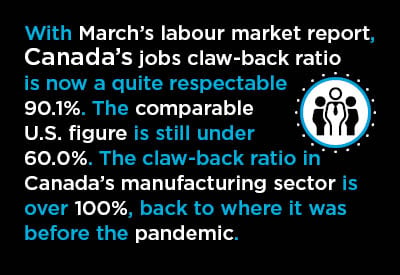 The worse performance for Canada was primarily due to the country locking down faster and subsequently staying under tighter restrictions longer than the U.S. to stave off coronavirus infections.

Consequently, Canada is benefitting from a ‘low base effect’ in year-over-year jobs-count percentage-change calculations sooner than America.

With March’s strong labor market report from Statistics Canada, featuring a month-to-month climb in jobs of +303,000, Canada is now +3.9% in total employment y/y.

Only one more month of a similar jobs gain (+300,000) would lift Canadian total employment to a level even with February of last year, before there were any negative impacts from the health crisis.

‘Return to Normalcy’ Gauge Climbs to 90%

An important gauge of the ‘return to normalcy’ is the jobs recover ratio (a.k.a., the jobs ‘claw-back’ ratio), which measures the degree to which employment has been restored relative to last spring’s big cuts.

With March’s labor market report, Canada’s jobs claw-back ratio is now a quite respectable 90.1%. The comparable U.S. figure is still under 60.0%.

The claw-back ratio in Canada’s manufacturing sector is over 100%, meaning that staffing on production lines is back to where it was before the pandemic.

The public sector’s claw-back ratio is 172.5%, indicating that not only have all vacated positions with government been refilled, but some extra hiring has been undertaken for good measure. (Year-over-year public sector employment is currently +7.2%.)

Where there’s still a big problem, though, is in the ‘accommodation and food services’ sector, which is presently sitting with a claw-back ratio of only 50.3%.

Payrolls in Canada’s construction sector increased by +26,000 jobs in March, raising the ‘hard hat’ jobs claw-back ratio to 91.6%. (Year-over-year employment in construction, though, is nothing to get excited about, at -1.6%). 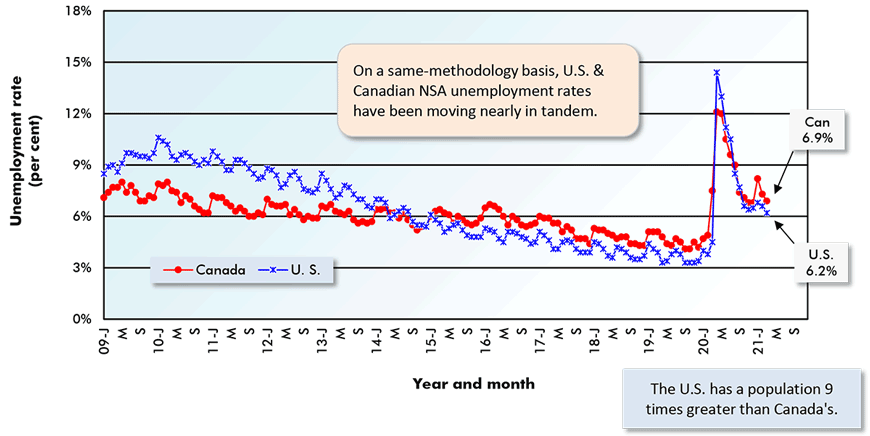 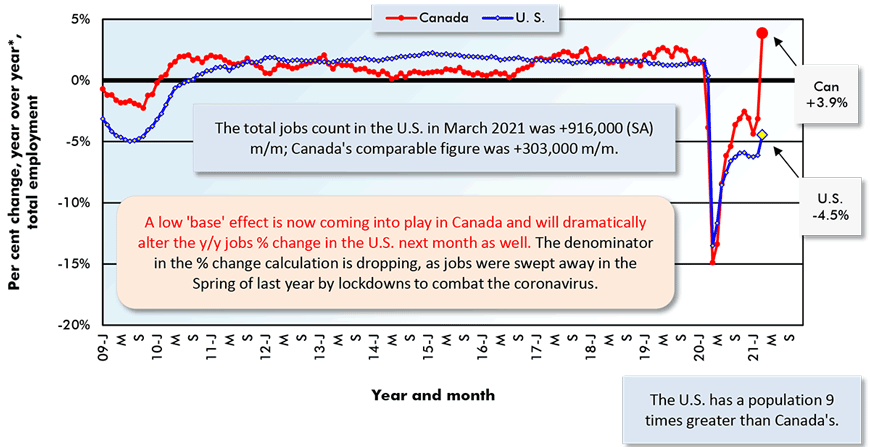 The accompanying charts on provincial labor markets make it clear, though, that there’s one frontrunner well ahead of the rest of the pack, British Columbia. That province has a claw-back ratio of 130.8%, moving it well past employment recovery and into the next jobs creation phase.

From Graph 4, B.C. is in first place for year-over-year jobs change, +6.2%, and it’s in third spot in a ranking of unemployment rates, from lowest to highest.

As a final note, the ‘gig’ jobs market may have been battered over the past year, but it’s still a formidable force. The total number of full-time jobs in Canada is +2.1% y/y, but part-time work is a roaring +12.8%. 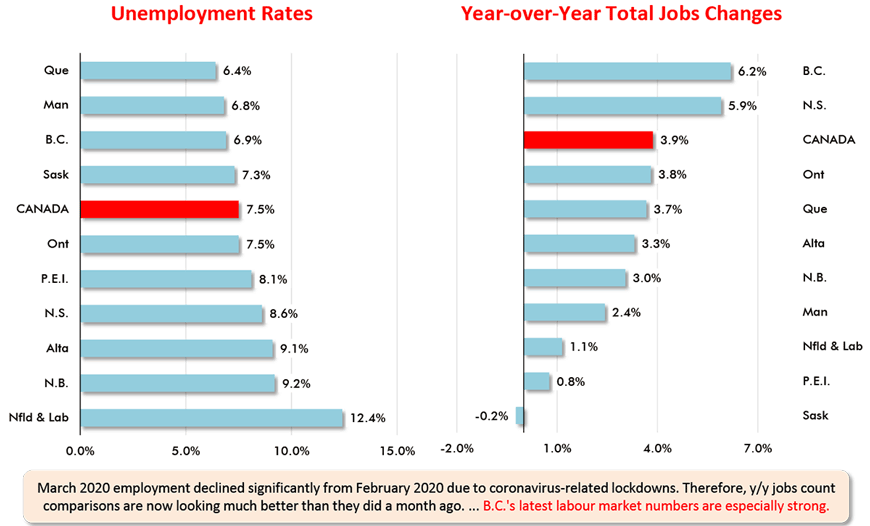