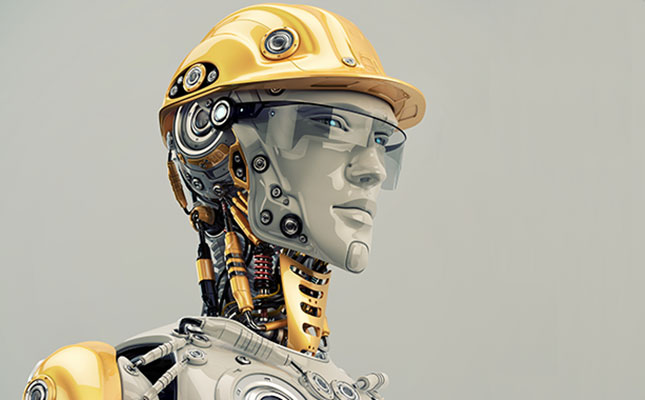 Is Construction Poised for a Robot Revolution?

Imagine walking onto a construction site in the near future to find a team of robots doing site grading and site layout or laying a brick wall or even assembling scaffolding trusses.  This may seem far-fetched, something you'd expect in a sci-fi flick or a story by Isaac Asimov or Ray Bradbury, but advances in robotic technology are quickly making it a reality. In fact, depending on the type of work you do, you might already be using robots at the construction site. Robotic heat welders and remote-controlled demolition robots have been commercially available for a number of years.

The SAM System was developed by Construction Robotics, LLC and is intended to work with a mason in order to reduce costs, increase productivity and increase the quality of work. The system eliminates the strenuous work by lifting the brick, applying mortar and placing each brick in place. The mason is responsible for ensuring accurate placement of the bricks and to clean up excess mortar and to oversee the overall project is completed correctly. Construction Robotics currently has five SAM units it rents out to assist on construction projects.

Fastbrick Robotics unveiled Hadrian X last year, a prototype of a bricklaying robot that can lay 1,000 brick in an hour and can build an entire house in two days complete with pathways for electrical and plumbing and spaces for doors and windows.

The TERMES Project which is being developed at Harvard University has been making the rounds in the media recently and was the inspiration for this blog post. The robots were inspired by termites use of stigmergy to build mounds. Instead of communicating directly with each other, both the termites and the robots respond to changes in the environment in order to perform their next action. If one of the robots breaks down or stops working it won’t affect the completion of the structure they are programmed to construct.

The Tiger Stone is a brick road paving machine created by Vanku that can pave 3,229 SF of brick road in a day with just two human operators. The bricks have to be hand fed in the desired pattern from a hopper into a pusher slot which then lays out the brick road in one continuous sheet.

Drones are all the rage these days whether they are being used by the government to spy on citizens, as a fun toy you can control with your iPad, or by Amazon to deliver packages to your doorstep the day you order them.

Flight Assembled Architecture is a collaboration between Gramazio & Kohler Architects and Raffaello D’Andrea, Professor of Dynamic Systems and Control at the Swiss Federal Institute of Technology. The architectural installation used quadrotor helicopters that interact with each other in order to lift and assemble modules to create a structure.

Theometrics is developing a robot that can use CAD drawings or BIM models to navigate a construction site to do layouts and measurement tasks. DPR Construction and Trimble Navigations are also working on a similar “laybot” called Project Lion.

There are a number of equipment manufacturers that supply the construction industry with remote-controlled demolition robots including Brokk, Finmac and Husqvarna. The video below shows Interstate Sawing of West Bend, WI using what I believe is a Brokk 260 to demo the interior of a school building for a renovation project.

Crash trucks equipped with attenuators have been used for years in highway work zones to protect workers and motorists. You’ve probably seen them in action acting as a barrier between workers painting lines or resurfacing roads. Royal Truck & Equipment is planning to protect the one person still at risk when crash trucks are used, the driver.

This year they are launching self-driving crash trucks as part of a demonstration project for the Florida DOT. The trucks can be operated by remote control, GPS waypoint navigation or by following a lead vehicle that would transmit information to the crash truck instructing it when to turn, brake and what speed to travel.

Komatsu launched SmartConstruction which ties into their Intelligent Machine Control (IMC) construction equipment.  The IMC dozer has full automatic blade control and receives real-time information of the blade position from the Global Navigation Satellite System.  The blade is automatically controlled according to 3D CAD construction data with the coordinates computed from design drawings.

Komatsu uses Skycatch drones from San Francisco-based Skycatch to survey job sites from the air and then upload images to computers to generate 3D models of the terrain.  Prior to construction, the 3D drawings will provide an accurate understanding of the area, shape and volume of earth to be moved. Once construction plans are designed the models will be programmed into the unmanned IMC construction equipment to begin work on the early foundation. Other heavy equipment manufacturers such as Caterpillar, Case and Volvo CE are all working on developing autonomous construction equipment.

Most of the 3D printing technology we hear about is for printing entire structures like DUS Architects’ KamerMaker 3D printer, Behrokh Khoshnevis’ Contour Crafting  and Enrico Dini’s D-Shape 3D printer. WinSun Decoration Design Engineering printed 10 single-room buildings in a span of 24 hours. They followed that up by 3D printing a five-story apartment building and a nearly 12,000-sqft. villa.

One of the main arguments against introducing robots in any work environment is that they will eliminate jobs and put people out of work. If anything, the advancements of robots in construction will probably create as many jobs as it eliminates, if not more. Humans will still be needed to monitor work and perform some tasks, there will also be a need for repairs to the robots and people to operate and program them to complete various tasks.

Whether or not all of the technology showcased will be commercially viable or cost effective in the future is yet to be determined. Many of these are already in use and it appears that construction workers will one day work alongside robots. Robots will help to alleviate some of the strenuous work associated with construction and create safer jobsites.