Despite U.S. construction continuing to record a total activity level below potential, the sector should be receiving more bouquets for the bigger role it is playing in the economy overall. 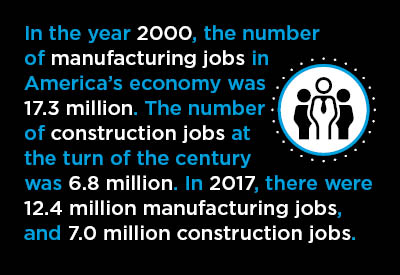 Historical data from the Bureau of Labor Statistics (BLS) records that in the year 2000, the number of manufacturing jobs in America’s economy was 17.3 million. The same source records that the number of construction jobs at the turn of the century was 6.8 million.

The clearest way to illustrate the rising importance of construction relative to manufacturing, at least from an employment standpoint, is to express their relationship in terms of a ratio. In 2000, there were four jobs in construction for every ten jobs in manufacturing. Now, there almost six on-site jobs for every ten production-line positions.

Whereas in Canada there were 4 construction jobs for every ten jobs in manufacturing when the 20th century became the 21st, there are presently eight jobs in the building sector for every ten contained within factory walls

Having given construction a pat on the back, it’s time now to move on to the usual monthly rundown of some of the most interesting material to have appeared in the latest public and private sector data releases.

(1) The U.S. unemployment rate stayed remarkably low in March, at 4.1%, and the most recent weekly jobless claims number was less than 300,000 for a consecutive stretch dating back more than three years, an unprecedented period of success for this series. Year-over-year total jobs creation in the latest month was okay, but no cause for clamorous celebration. It was +1.5%, whereas +2.5% or better would be reason to break out the bubbly. Tightness in the labor market has reached the point, however, where there are plenty of job openings but it’s hard to fill them.

(2) Construction employment in March was a robust +3.3% year over year. Weekly wages for hands-on construction workers (i.e., omitting bosses) in March were an outstanding +5.0% year over year. Some other industrial sub-sectors where staffing has been on a rip-roaring tear year over year have been: ‘machinery and equipment rental’, +14.0%; ‘couriers and messengers’, +9.0%; ‘nanotechnology research and development’, +5.1%; and ‘electronic shopping and auctions’, +4.8%. Jobs in ‘home health care’ have long been recording a year-over-year gain of +3.0% or a smidge more. In two resource-related sectors, where there were steep declines a year or two ago, there are now increases: ‘oil and gas extraction’, +3.8%, and ‘coal mining’, +1.8%.

(5) There was a time, particularly prior to the Great Recession in 2008-09, when a major cause of the U.S. goods trade deficit was the importation of energy products. Not anymore. By means of hydraulic fracturing of shale rock, America has become much more self-reliant in oil and natural gas. The number of barrels of oil imported into the U.S. through the first two months of this year, versus January-February of last year, was -11.3%. The year-to-date number of barrels imported from OPEC nations was -33.3%. The volume of crude imports from Saudi Arabia was -55%.

(7) Canada’s goods exports in February were +0.4% month-over-month while its goods imports were +1.9%. On a year-over-year basis, Canada’s goods exports in the latest month were +1.5%, well below its goods imports pick-up of +3.5%. Therefore, Canada once again suffered a substantial deficit in its goods trade with the world, -$32 billion CAD. Prior to mid-2008, Canada consistently recorded a monthly goods trade surplus that lay between +$40 billion and +$60 billion, annualized. Since then, there have been 86 months of deficit and only 25 months of surplus. Furthermore, the deterioration has occurred even as the value of the ‘loonie’ has mostly resided 20% below the ‘greenback’, which is supposed to help promote Canadian export sales.

(8) No wonder a huge ‘brouhaha’ has erupted in Canada over the proposed Trans Mountain pipeline expansion. If it is ever allowed to proceed to completion, it will open vast new markets in Asia for Alberta’s oil reserves. But while the project has received all regulatory agency approvals, roadblocks erected by the B.C. government and various lobby groups have threatened to delay site work forever. TM’s owner, Kinder Morgan, has erupted in frustration. On the other side of the fossil fuel coin, Canada has taken a huge hit on the natural gas export front. Prior to mid-2008, Canada almost always exported between $2.0 billion and $3.0 billion of natural gas each month. During the past nine years, the figure has shrunk to $1.0 billion in a healthy month.

(9) The U.S. Conference Board’s consumer confidence index fell from 130.0 in February to 127.7 in March. (The index has a base of 1985 = 100.0). The minor drop presents little cause for alarm. After all, February’s level was an 18-year high. Survey respondents have expressed some heightened wariness concerning the volatility in stock markets this year. After some exaggerated swings up and down, there have lately been returns to ‘starting points’. The mid-April results for the major indices relative to their 2017 year-end closings have been: Dow Jones Industrials, -1.5%; S&P 500, -0.7%; and NASDAQ, +3.0%. The Toronto Stock Exchange (TSX) is -5.8%.

(10) A few words on the export performances of Canada’s provinces also seem warranted. The four provinces with the largest economies north of the border, from east to west, are Quebec, Ontario, Alberta and B.C. Ranked according to year-to-date changes in their goods export sales, 2018 versus 2017, Alberta is the leader (+8.3%), followed by B.C. (+3.3%), Quebec (+0.2%) and Ontario (-3.1%). Alberta has drawn exports strength from energy (+7.7%) and petrochemical products (+7.0%). B.C. is benefitting from an uplift in metals and mineral product exports (+19.4%). Quebec has seen declines in aerospace (-3.4%) and forestry product (-0.9%) exports. Ontario has been hit by fall-offs in motor vehicle (-8.3%) and consumer goods (-3.7%) exports. Provincial elections are scheduled for later this year in Ontario (June) and Quebec (October).

(11) In the parlance of television game shows, this month’s ‘Nuggets’ article will conclude with a final rapid-fire round. The Purchasing Managers’ Index (PMI) of the Institute for Supply Management (ISM) was 59.3% in March, a little below February’s 60.8%. A PMI above 50.0% indicates both the U.S. economy and manufacturing are expanding. The PMI has been exceeding not just 50.0%, but 55.0%, for 12 months in a row. Canadian housing starts have also been beating an important benchmark. At 225,000 units annualized in March, they were above 200,000 units for the tenth month in a row. In Canada’s six most populous cities, new home groundbreakings to date this year have been: Vancouver, +30%; Toronto, +13%; Calgary, -1%; Montreal, -4%; Edmonton, -19%; and Ottawa-Gatineau, -32%. Surely there’s irony in the fact that the only two cities with positive percentage changes are also the ones specially targeted by government for punitive tax and mortgage-approval measures to curb home-buying demand.