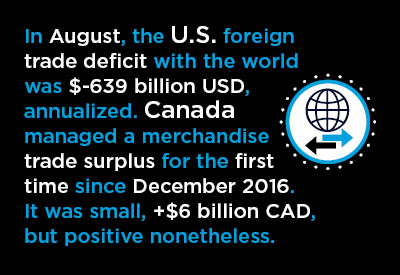 At their September-ending closing values, the major U.S. stock market indices were all within a hair’s breadth of their 52-week highs. Investor sentiment, however, shifted radically in the second week of October. There was a sudden awakening to the threats imperiling the future growth of the economy and of earnings.

On a year-over-year percentage-change basis, the extra boost provided to profits from the big U.S. tax-rate cut will diminish when 2018 crosses over into 2019. The new tariffs on myriad Chinese import goods are ratcheting up domestic costs. And wages that are gradually climbing due to a super-tight labor market (i.e., a 50-year low 3.7% jobless rate) are also fueling worries about inflation.

The Federal Reserve has increased its federal funds rate to a range of 2.00% to 2.25%. The Chairman of the Fed, Jerome Powell, doesn’t want to stop there. He’d like to see the policy-setting rate advance to at least 3.00%, a level which used to signal ‘neutrality’ (i.e., neither too stimulatory nor too repressive). The Bank of Canada’s ‘overnight rate’ is currently 1.5%.

Also, to back out of previous quantitative easing, the Fed is selling off its vast accumulation of treasury bills, which lowers their price and causes an increase in rates outside the federal funds rate. For the first time in many years, the U.S. 10-year bond yield has bobbed up above 3.00% and the 5-year fixed mortgage rate has exceeded 5.00%.

Higher interest rates carry some serious baggage. They make the cost of servicing business, consumer and government debt more expensive. They exert a drag on the demand for housing and big-ticket consumer items (e.g., motor vehicles). And they can inspire international traders to bid up the price of a nation’s currency, which inhibits export sales.

Added to the plus side of the economic ledger in the latest 30-plus days, however, has been the re-working of NAFTA, henceforth to be known as the USMCA trade agreement. One assumes, with fingers crossed, that it will receive passage in the legislatures of the three signing nations.

With the foregoing as backdrop, there are the following additional statistics to mull over from recent public- and private-agency press releases.

(1) The year-over-year growth in U.S. total jobs in September was +1.7%. Construction employment rose at a rate that was more than two-and-a-half times speedier, +4.5%. Some other industrial sectors with super-charged jobs growth in the latest month were: ‘machinery and equipment rental’, +12.2% (partly arising from work to repair damage from an epic storm season); ‘courier and messenger services’, +8.6%; ‘electronic shopping and electronic auctions’ (while old retail standby Sears has sunk into bankruptcy protection), +6.0%; and ‘warehousing and storage’, +5.3% (a groundbreaking on a new Amazon fulfilment center in Alabama appeared in ConstructConnects’ Top 10 construction project starts list in September).

(2) Among construction sub-sectors, it’s been residential work that has provided the biggest uplift to employment year over year, +7.8%. ‘Heavy and civil engineering’ staffing has performed second best, at +3.9%. Trailing the other two has been nonresidential building, +3.0%. Hiring by specialty trade contractors has been buoyant, +4.4%. The rise in payrolls at architectural and engineering services firms has tailed off somewhat, to +2.8% y/y in the latest month.

(3). With respect to each of their previous peak employment performances, the current jobs levels are now a little higher in ‘heavy and civil’ construction, a little lower in nonresidential building, and still down to a considerable degree (-21%) in residential work. The net effect is that total U.S. construction employment is -5% compared with its previous summit in 2006-2007.

(5) The current ranking of unemployment rates, from lowest to highest, of Canada’s six most populous cites is as follows: Ottawa-Gatineau and Vancouver, tied at 4.5%; Montreal and Toronto, tied at 6.1%; Edmonton, 6.3%; and Calgary, 8.2%. Due to a less-stringent calculation methodology (i.e., with respect to who is out of work, but striving hard to win a pay check), Canadian unemployment rates tend to be higher than American. As for year-over-year employment, the six major cities in Canada appear in the following order: Edmonton, +3.3%; Ottawa-Gatineau, +2.8%; Toronto, +1.5%; Montreal, +1.2%; Vancouver, +0.4%; and Calgary, -0.7%. The all-jobs year-over-year percentage change for Canada is presently +1.2%.

(7) In August, Canada managed a merchandise trade surplus for the first time since December 2016. It was small, +$6 billion CAD, but positive nonetheless. While all U.S. oil imports year to date, in number of barrels, have been -7%, shipments from Canada have been +4%. Canada’s share of U.S. oil imports so far this year has been 46%. The number of barrels of crude that the U.S. has imported from OPEC nations through the first nine months of 2018 has plunged by one-quarter, -25%.

(9) Monthly average U.S. housing starts to date this year (i.e., through August) have been 1.274 million units (annualized), +6.6% versus last year’s comparable figure of 1.195 million units. Regionally, according to the Census Bureau’s four major groupings, residential groundbreakings have been heartiest in the West, +15.1%, followed by the South, +6.6%. The Midwest and Northeast have seen declines of -1.3% and -4.0% respectively.

(10) The new homes construction market is considerably larger in the U.S. South than in the other three regions. The South has accounted for half of total national starts in 2018. In a bit of an unexpected development, multi-family starts this year, at +8.5% to date, have forged ahead faster than single-family starts, +5.7%. Residential building permits are a forward-looking indicator for the housing starts series. Monthly average housing permits to date in 2018 have been +4.4%, but there have been month-to-month declines in four of the last five months. The U.S. housing permit data has been trending mildly downwards since March of this year.

(11) Canadian housing starts in September, at 189,000 units annualized, retreated to their lowest level since November 2016 (188,000 units). Monthly average new home starts north of the border have been -1.8% compared with the first three quarters of 2017. A major story in Canada concerns how dominant multi-family starts have become relative to singles. For Canada’s 35 census metropolitan areas (CMAs), multis have made up nearly three-quarters (74.4%) of the total in 2018, with singles as the hanging-back remainder. In the three biggest cities, the chasm has been even wider – 84% for multis and 16% for singles in Toronto; 89% for multis and only 11% for singles in Montreal; and 81% for multis and 19% for singles in Vancouver. Furthermore, those three cities have accounted for nearly 60% of total multi-family construction in the 35 CMAs so far this year.

(12) U.S. ‘retail and food services’ sales in September were +4.7% year over year, an acceptable advance but falling short of a ‘pop a champagne cork’ celebration. The benchmark for truly healthy current-dollar (i.e., not adjusted for inflation) retail sales is +5.0% year over year. ‘Motor vehicle and parts dealers’ sales were only +1.1% y/y. ‘Building material and garden equipment and supplies dealers’ receipts were a modest +1.5%. Better returns were rung up by ‘food services and drinking places’, +7.1%, and ‘nonstore retailers’, +11.4%.