The tail that is attempting to wag the dog these days is the stock market. With only two weeks remaining in 2018, America’s major stock market indices have moved, at best, sideways versus close-of-year 2017. The Dow Jones Industrial Index (DJI) is currently -0.5% relative to its closing level on December 31 of last year. The S&P 500 is -0.9% and NASDAQ, -2.4%. 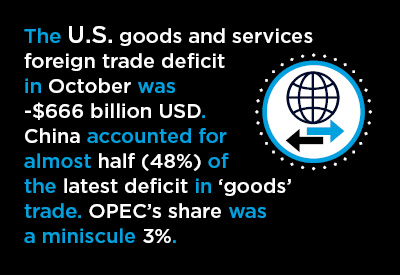 North of the border, the Toronto Stock Exchange is -9.0% compared with year-end 2017.

The FANG stocks have been leading the retreat in equity prices. Since the summer of this year, the share price of Facebook, which has experienced confidentiality problems galore, is -29.2%; Amazon, the retail sector’s ‘disruptor-in-chief’, is -19.9%; Netflix is -34.1%; and Google/Alphabet, -16.2%. Even Apple has moved out of favor, -26.3%. On August 2nd, Apple became the world’s first trillion-dollar company, but of course that valuation no longer stands.

The Federal Reserve has been paying attention. Earlier, the Chairman of the Fed was adamant that he wanted to see the federal funds rate return to its ‘equilibrium’ or neutral level of 3.00%. Neutrality is when prevailing interest rates are neither too stimulatory nor too contractionary.

The current level of the federal funds rate is in a range of 2.00% to 2.25%. The likelihood is still high there will be another 25 basis-point (where 100 basis points equals 1.00%) increase later in this month of December. The schedule for next year, however, is no longer as firmly established. Fed Chairman, Jerome Powell, has stated that future action on interest rates will be ‘data driven’.

By the way, the stock markets also really don’t like the tariff skirmish with China. Whenever there is even a hint of a resolution of that dispute, investors respond ecstatically.

With the foregoing as background, there are the following additional nuggets to be gleaned from the public pronouncements and press releases of various governmental and private sector bodies.

(1) Equity prices, in general, have also suffered from some analysts’ observations that the enormous corporate tax-rate cut, from 35% to 21%, may have merely provided a temporary ‘sugar high’. Due to a ‘base-year’ effect (i.e., a different denominator from one year to the next), a 20%-plus climb in profits in 2018 will diminish to between +5% and +10% in 2019. Another key feature in the Tax Cuts and Jobs Act, a measure to encourage firms to repatriate offshore cash holdings, − i.e., a 15.5% one-time levy, − has proven quite successful. Hopes that more immediate access to those funds would lead to a surge in capital spending, however, have been illusory.

(2) Apple has brought $250 billion home from overseas. Of that total, $100 billion (or 40%) has gone towards share buybacks. Other companies engaged in re-purchasing their own equities have included Cisco ($25 billion), Wells Fargo ($23 billion) and Warren Buffet’s Berkshire Hathaway ($1 billion). (Under normal circumstances, share buybacks spark price hikes through reducing the ‘float’ and upping EPS.) Re-patriated funds are also being used to pay down debt. Speaking of debt, consumers’ monthly commitments to pay for car loans, with interest rates on the rise, are being increasingly being mentioned as a danger to ongoing U.S. economic growth.

(3) Many companies – and maybe especially the FANG companies – are still prosperous enough to have significant impacts on jobs and construction opportunities in numerous local economies. Amazon, deciding to split its HQ2 initiative, will be making large additions to staff in Virginia and Long Island (+25,000 jobs in each location). Apple has announced that it will be building a new $1 billion campus on 133 acres in Austin, Texas. It will house an additional 5,000 workers. There are already over 6,000 people working for Apple in Austin. The company also plans to add office space in Seattle, San Diego and Culver City CA.

(4) In retrospect, Amazon choosing Arlington as the site for half of its HQ2 should come as no surprise. Jeff Bezos, owner of both Amazon and the Washington Post newspaper, owns a home nearby. Plus, there’s plenty more news from Amazon. The company has been announcing expansions of its air delivery capacity, with Fort Worth and Cincinnati to serve as major hubs.

(5) The demand for new stadium construction projects has moved on from the sports of football and baseball to hockey and soccer. The Islanders of the National Hockey League (NHL) are planning an 18,000-seat $1 billion arena at Belmont Park, next to the grandstand used for the third leg of horse-racing’s famous Triple Crown. On the West Coast, a new NHL franchise (the league’s 32nd) has just been awarded to Seattle. The team’s opening season will be in 2021-2022. A planned Seattle Center Arena development has an $850 million budget.

(6) Included among ConstructConnect’s Top 10 project starts list in November was $200 million for Cincinnati’s 27,500-seat Major League Soccer (MLS) West End Stadium. Ohio, as a hotbed of soccer interest, has other construction news. A $1 billion multi-use complex is on the drawing boards, to include a 20,000-seat soccer stadium for Columbus. Neither big high-tech office projects nor showcase sports facilities are proceeding at zero cost to taxpayers. Fierce competition among cities to win these projects is being accompanied by sizable cash grants and tax abatements.

(7) The U.S. goods and services foreign trade deficit in October was -$666 billion USD. The shortfall has been gradually worsening over the past couple of years, although it’s still better than in the mid-00s, when -$800 billion was common. China accounted for almost half (48%) of the latest deficit in ‘goods’ trade. OPEC’s share was a miniscule 3%.

(9) Qatar will be relinquishing its membership in OPEC when the calendar flips over to 2019. Relative to other OPEC nations, Qatar has limited oil production. But it is a giant in natural gas output. Qatar Petroleum (QP) has expressed an intention to spend billions more on LNG production in the U.S. QP holds the major stake in one of the world’s largest LNG facilities, the Golden Pass terminal south of Port Arthur, Texas. Exxon Mobil and Conoco Phillips are small shareholders.

(10) As in many locales around the world, with corridors in Canada being ‘poster-boy’ examples, and despite Washington’s efforts to trim regulations, energy-related construction projects in the U.S. are not proceeding without major hiccups. At the beginning of 2018, there were groundbreakings on two big natural gas pipelines – Atlantic Coast and Mountain Valley − in and around Virginia. Both those projects have been stalled by legal challenges that question whether enough attention is being paid to environmental concerns.

(11) Alberta Premier Rachel Notley’s directive that oil producers in the province cut output by 8.7% for a while has paid a quick dividend. The differential between the price paid for Western Canada Select (WSC) oil and West Texas Intermediate (WTI) crude has shrunk almost overnight from nearly $50 per barrel to a range of $10 to $15.

(12) On December 13th, Moody’s Investor Services downgraded, from Aa2 to Aa3, the long-term debt rating of the province of Ontario. In its note of explanation, Moody’s cites concerns about Ontario’s likely $14.5 billion CAD deficit in 2018-2019, which will be hard to roll back, given an expected annual GDP growth rate of less than 2.0% out to 2021. The new Doug Ford government at Queen’s Park is in austerity mode. To lower the public-sector payroll, it’s reaching out to more non-union workers with enticing severance packages.

(13) Finally, here’s a speed round of commentary on topics normally covered in the monthly Nuggets report. U.S. ‘all-items’ inflation in November was a reasonably-acceptable +2.2% y/y. The ‘core’ rate was also +2.2%. Compared with double-digit percentage gains during much of 2018, the price of gasoline was a restrained +5.0%. In retail trade, the sales rung up by U.S. shopkeepers in November were +4.0% y/y. Nonstore retailers (e.g., those selling primary through platforms and auctions on the Internet) did much better, +10.8%. Everyone is waiting to see what the holiday gift-giving season will bring. And Canada’s housing starts in November (216,000 units) once again exceeded 200,000, seasonally adjusted and annualized (SAAR). The monthly number has dropped below 200,000 only three times so far this year, and even then, 190,000 was as low as the fell. In the nation’s six major population centers, year-to-date housing starts have been: Toronto, +4%; Montreal, +3%; Vancouver, -9%, Calgary, -4%; Edmonton, -12%, and Ottawa-Gatineau, +6%.