According to the ‘headline’ number (4.1%) released by the Bureau of Labor Statistics (BLS), the U.S. economy is now operating close to full employment. And there is widespread delight over the smorgasbord of tax cuts recently made available to corporations and individuals. In the stock markets, there are presently few curbs on the enthusiasm of investors. 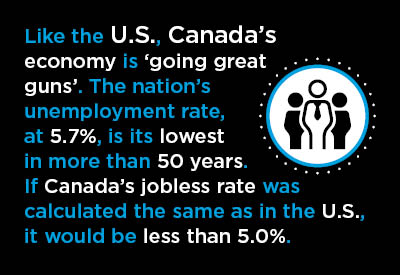 But some analysts are hearing a warning bell over the cheering. The as-yet mild caution they are picking up on concerns the possibility of an outbreak of inflation.

With respect to labor, the year-over-year increase in compensation for all workers in the U.S. in December was +2.9%. For construction workers, it was +4.7%.

On the materials side, not only will newly-imposed duties on some imports (e.g., lumber) add to costs, but it should also be noted that the price of oil has clawed its way back above $60 USD per barrel. Further with respect to commodities, November 2017’s Raw Materials Price Index (RMPI), published by Statistics Canada, was +14.2% year over year, with ‘crude energy products’ +25.4%.

Therefore, the sub-text of much of this month’s Nuggets report, especially from point (4) on, is pricing.

(2) Milken points out that many of the cities on the ‘fastest track’ for growth have large health care and/or national defense sectors. It’s also helpful for a city when it is home to one or more well-known colleges or universities. For example, Provo plays host to Brigham Young University. Nor should the importance of a thriving high-tech sector to a local economy be underestimated. But it’s interesting that rising wages and rents in the best-known technology hubs, such as Silicon Valley, are now causing opportunities to spread further afield.

(3) The cities in positions 11 through 15 in the Milken ranking are: San Jose, California; West Palm Beach, Florida; Charlotte, North Carolina; Atlanta, Georgia; and Tampa, Florida. Among states, Florida has the most urban centers that are moving ahead vigorously. Four of the fifteen highest-ranking cities are situated in the Sunshine State.

(4) For one of three reasons, – i.e., due to previously enacted legislation, or a positive result from a ballot box initiative, or a ‘cost of living’ adjustment – 18 U.S. states have begun 2018 with a higher official ‘minimum wage’ than they had at the end of 2017. At $12.50 per hour, the District of Columbia has the highest minimum wage in the country. None of the 50 states currently has a minimum wage above $12.00 per hour. Five states have no minimum wage whatsoever: Alabama; Louisiana; Mississippi; South Carolina; and Tennessee.

(7) In December, the Purchasing Managers’ Index (PMI) of the Institute for Supply Management (ISM) improved to 59.7% from 58.2% in November. December’s reading was the second best in 2017, beaten only by September’s 60.8%. The ISM tracks the historical relationship between the PMI and ‘real’ (i.e., inflation-adjusted) gross domestic product (GDP) growth. According to this match-up, the PMI’s latest 12-month average value of 57.6% corresponds with a year-over-year constant-dollar GDP burst of +4.5%.

(8) Two of the sub-set indices derived from the overarching PMI survey, and designed to provide context, yielded noteworthy results in December. The ‘new orders index’, at 69.4%, soared to a peak not seen since September 2004. And the raw materials ‘prices’ index, at 69.0%, marked 22 straight months of upwards trajectory. The proportion of survey respondents saying they paid more for material inputs was vastly higher (41%) than those reporting they paid less (3%). The remainder (56%) said their material costs were stable.

(9) The capacity utilization rates set out by the Federal Reserve, however, are still disappointing. Keep in mind that reaching 80.0%, at least, is the standard for launching a new wave of capital spending. Total American industry in November 2017 was operating at a usage rate of only 77.1%, although that was better than the 75.5% of November 2016. Manufacturing in November 2017 had improved only slightly to 76.4% from 75.1% a year prior.

(10) Out of more than 20 U.S. industrial sub-sectors, there are eight with usage rates above 80%: ‘computers and peripheral equipment’, 94.6%; ‘paper products manufacturing’, 85.6%; ‘mining’, 84.5%; ‘electrical equipment, appliances and components’, 84.4%; ‘fabricated metal products’, 82.4%; ‘plastics and rubber products’, 81.9%; ‘motor vehicles and parts’, 81.7%; and ‘petroleum and coal products’, 81.0%. Several of the foregoing are benefitting from ongoing good consumer demand for cars and light trucks. On that score, Toyota and Mazda have announced they will be building a new $1.6 billion joint-venture plant in Huntsville, Alabama.

(12) Like the U.S., Canada’s economy is ‘going great guns.’ The nation’s unemployment rate, at 5.7%, is its lowest in more than 50 years. If Canada’s jobless rate was calculated the same as in the U.S., it would be less than 5.0%. But there are more potential fault lines north of the border. There’s a lengthy list of worries one could easily obsess over: the danger that NAFTA may be scrapped; the high duties imposed on softwood lumber, newsprint and aerospace product exports to the U.S.; the more stringent rules now being applied for mortgage approvals; and the onset of a higher interest rate regime, especially given the heavy indebtedness of Canadian consumers.