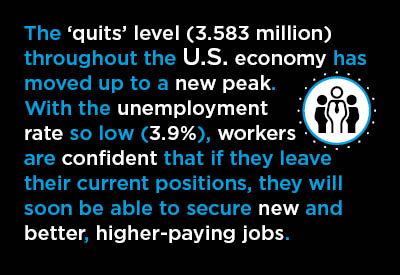 Other reports written by this author over the past month have focused on ConstructConnect’s up-to-date starts statistics, persistently taut labor markets and soaring construction material costs, as captured by the Producer Price Index series. (See also the following articles: "U.S. Construction Costs Are Soaring" and "Costs of Service, Commodity and Energy Inputs Into Construction Are Heating Up".)

In the background, there’s the ongoing uncertainty about Canada’s participation in a new 3-way trade agreement with the U.S. and Mexico. And it’s that time of year when the world of academia comes into full bloom once again.

In other words, our kids are going back to school. Construction forecasts dealing with educational facilities are more upbeat for K-12 than for institutions of higher learning. Adding credence to that argument are the employment numbers for elementary and secondary schools, +3.6% year over year, versus jobs with colleges and universities, +1.8%.

But there’s a wealth of other data to pour over for insight into what is transpiring in the U.S. and Canadian economic heartlands. Points (1) to (14) below get the ball rolling.

(1) Some remarkable findings are showcased in the Bureau of Labor Statistics (BLS)’s latest Job Openings and Labor Turnover (JOLTS) report. The collection and publication of monthly JOLTS data began in 2000, eighteen years ago. In the most recent July, both the level (6.939 million) and rate (4.4%) of U.S. total job openings soared to record highs. Furthermore, both are now far exceeding their previous peaks in 2007. The level of job openings in the U.S. economy is higher than the number of individuals who are saying (in the monthly household survey) that they are unemployed (6.234 million).

(2) The ‘quits’ level (3.583 million) throughout the economy has also moved up to a new peak. With the unemployment rate so low (3.9%), workers are confident that if they leave their current positions, they will soon be able to secure new and better, and hopefully higher-paying, jobs. Interestingly, the ‘quits’ level in the U.S. construction sector, as a subset of all industrial jobs, has been sloping steadily upwards since 2009, but it has yet to match the height it attained in late 2005.

(3) In other construction JOLTS measures, the job openings levels (273,000) and rates (3.6%) are in ties for best in the history of the series. Level and rates of construction job ‘hires’, however, have been disappointingly modest and flat for a half decade or so. This is not a reflection of any lack of desire on the part of builders to undertake more staffing. Rather, it results from a reduced pool of workers in the industry. Poor availability of qualified construction labor has become a notable problem.

(4) Continuing with the theme of a tight U.S. labor market, the weekly initial jobless claims figure dropped to a new low of only 203,000 for the week ending September 1, 2018. When the number of first-time unemployment insurance seekers is less than 300,000, the economy is percolating nicely. But even when the economy has come to ‘full-roasted perfection’, the number has never previously been on the cusp of falling below 200,000. That is, until now.

(5) For all that the U.S. economy is running into restraints on labor supply, the capacity utilization rates for total industry and manufacturing, as calculated by the Federal Reserve, remain underwhelming. In August, U.S. total industry was operating at 78.1% of capacity. 78.1% is less than the long-term (1972-2017) average of 79.8%. A number above 80.0% (and even better, above 85.0%), is considered the threshold beyond which capital spending intentions will heat up. In two other periods of strong economic activity, 1988-89 and 1994-95, total industry capacity usage climbed to 85.0%-plus.

(6) The manufacturing sector’s capacity utilization rate in August, as calculated by the Fed, was only 75.8%. The 45-year average for manufacturing has been 78.3%. Among manufacturing’s sub-sectors, the highest capacity usage rates in August were recorded in: paper products, 92.0%; fabricated metal products, 81.1%; and motor vehicles and parts, 80.1%. The last number seems at odds with August’s hiring number from the auto sector, which was -0.3% jobs year over year. Besides paper production, there is another area of the economy where the usage rate has become quite elevated, − ‘mining’, at 92.0%.

(7) ‘Official’ U.S. capacity utilization rates may be failing to impress, but the same cannot be said for comparable figures from north of the border. According to Statistics Canada, total Canadian industry in 2018’s second quarter was operating at 85.5% of capacity, with forestry and logging at 90.6%, followed by oil and gas extraction (87.1%), electric power generation (84.7%) and manufacturing (81.8%).

(8) Within Canadian manufacturing, the leaders for capacity utilization rates in Q2 2018 were: paper, 90.0%; chemical products, 88.0%; transportation equipment, 87.6%; wood products, 86.9%; and food, 85.2%. By the way, StatCan has assessed that Canada’s construction sector is currently operating at 93.0% of capacity. When firms are approaching full capacity, appropriate and effective long-term planning dictates that they invest in new or additional machinery and equipment and/or, as in the case of manufacturing, new square footage for extra production lines.

(9)  U.S. retail and food services sales continued along a bullish path in August, according to the Census Bureau. While total spending was +6.6% year over year, part of that outsized increase originated with gasoline stations, +20.3%. It must be remembered, though, that the dollar volume of gas sales is being ‘pumped up’ by a major price hike. The gasoline sub-index within the overall Consumer Price Index (CPI) is presently also +20.3%. One might, therefore, conclude that there has been no ‘real’ or constant-valued increase in gasoline sales over the past year.

(11) Further with respect to prices, the ‘headline’ inflation rate in America in August eased back to +2.7% year over year from +2.9% in July. Alarms go off when the all-items CPI crests +3.0%. Lately it has appeared headed in that direction, but August was a welcome retreat from the brink. The last time the all-items CPI was +3.0% year over year occurred in December 2011. August’s ‘core’ inflation rate, which omits volatile food and energy components, also relaxed somewhat, landing at +2.2% from +2.4% the month prior.

(12) The Fed monitors inflation to determine when and how quickly it should adjust interest rates. The Fed’s favorite indicator is the price index for Personal Consumption Expenditures (PCE). The PCE price index, excluding food and energy, was +2.0% in August. While +2.0% is acceptably on target, it’s worth noting that the PCE index has been gradually creeping higher. As a monthly average in 2017, it was +1.6%. To date in 2018, it has averaged +1.9%. Canada’s August CPI results are scheduled to be released on September 21. In July, Canada did hit an all-items CPI increase of +3.0%.

(13) An inordinate amount of consumer debt has long worried economists and other analysts examining the Canadian economy. To rein in skyrocketing house prices, a key source of mortgage debt, various measures have been introduced to cut down on loan approvals. There has been a significant toughening of the financial criteria lending officers need to see equaled or surpassed before they will pen their signatures to contracts. One would think this might put a crimp in new homebuilding activity. So far, though, not so much. Canadian housing starts in August were 201,000 units seasonally adjusted and annualized (SAAR). Throughout 2017, they average 220,000 units monthly. To date in 2018, they have averaged 217,000 units monthly.

(14) Among Canada’s six largest population centers, the new residential-foundation frontrunners, by year-over-year percentage change (in units) to date in 2018, have been: Montreal, +14%; Calgary, +8%; and Vancouver, +2%. Falling behind have been: Toronto, -2%; Ottawa-Gatineau, -3%; and Edmonton, -7%. What jumps out from those numbers is how narrow the band has been from best to worst. There’s more variability in the percentage changes of multi-family starts. The range goes from +17% for Montreal to -15% for Edmonton. Lying in-between are: Calgary, +16%; Toronto, +8%; Vancouver, +3%; and Ottawa-Gatineau, -14%.