In the final Employment Situation report from the Bureau of Labor Statistics (BLS) before the Presidential election, the story concerning job creation wasn’t just good for the latest month, +161,000 in October, it was made even brighter by upbeat revisions to the earlier August and September estimates. 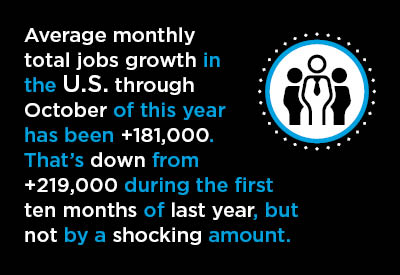 This is perfectly in keeping with other important indicators of U.S. employment. For example, the weekly initial jobless claims number has been below – and most recently, considerably below – the 300,000 benchmark for 87 weeks in a row. Never before, dating all the way back to the 1970s, has there been such a show a strength from this data series.

When weekly initial jobless claims fall consistently under 300,000, the monthly jobs creation number will almost certainly be at least +150,000. Some analysts have been worrying that this may not be sustainable for much longer, with the unemployment rate so low. In October, the headline jobless level (U-3) improved slightly to 4.9% from 5.0% in September. It’s becoming harder to find workers in some job categories.

There is a broader definition of the unemployment rate (U-6 in Table A-15 of the Employment Situation report), that includes individuals less firmly attached to the labor force, plus people who are working part-time but who would much prefer full-time positions. That measure in October fell to 9.5% from 9.7% the month before.

Average monthly total jobs growth in the U.S. through October of this year has been +181,000. That’s down from +219,000 during the first ten months of last year, but not by a shocking amount. The nominal year-over-year climb in total jobs has been 2.4 million.

The industrial sectors with the largest jobs increases, month to month, in October were ‘education and health services’, +52,000, and ‘professional and business services’, +43,000. In the former, health care was a particular source of hiring enthusiasm, led by ‘ambulatory health care services’, +19,000, and ‘hospitals’, +13,000.

In ‘professional and business services’, it was ‘employment services’, +8,000, and ‘computer system design services’, also +8,000, that expanded payrolls the most. As an interesting sidebar, ‘employment services’ includes casting agencies, and there’s a separate line item under ‘information services’ in Table B-1 of the Employment Situation report that records a noteworthy jump in jobs provided by ‘motion picture and sound recording industries’, +9,000.

Another source of good jobs growth in October was government, +19,000. Washington was by far the leader, +12,000, with state and local administrations playing secondary roles to about the same extent, +3,000 and +4,000 respectively.

Companies engaged in financial activities bolstered their staffing by 14,000 jobs in the latest month. Almost all the employment devastation in this sector, in the immediate wake of the credit crunch, has now been repaired. The total number of jobs with banks, brokerage houses, insurance firms and with real estate companies is about on a par with the prior peak in 2006.

Two sectors that have reliably provided good jobs growth in many previous months, failed to excite this time around – retail, -1,000 jobs, and leisure and hospitality, only +10,000. All of the latter’s jobs hike was at ‘food services and drinking places’.

The manufacturing sector cut 9,000 jobs. That’s a surprise given that October’s Purchasing Manager’s Index (PMI) from the Institute of Supply Management (ISM), at 51.9%, was quite positive for manufacturers. According to the ISM, a PMI reading above 50.0% indicates that “the manufacturing economy is generally expanding”.

The construction sector added 11,000 jobs in October. Still, on-site work is ahead by only 82,000 jobs since the start of this year. Through October of last year, the year-to-date gain was almost +300,000.

Construction’s not-seasonally-adjusted (NSA) unemployment rate is currently 5.7%. At this point of time in 2015, it was 6.2%.

For a perhaps better indication of developing tightness in construction’s labor market, there is the Job Openings and Labor Turnover report (a.k.a., the JOLTS report), also from the BLS.

According to JOLTS, the rate of job openings in the construction sector, presently hovering around 3%, is the highest it’s been since late 2006, when there was a homebuilding boom that, in short order, deteriorated into a bust, brought on by the sub-prime mortgage crisis.

Construction’s most-recently measured hiring rate of 5.1%, as also set out in the JOLTS report, is being beaten only by ‘arts, entertainment and recreation’ (7.0%), ‘accommodation and food services’ (6.3%) and ‘professional and business services’ (5.3%).

Not all is well on the compensation front for construction workers, however. Some large hourly and weekly increases (i.e., above +5.0% year over year) in September have been scaled back in October.

For all construction workers, including supervisory personnel, average hourly earnings in October were +3.2% year over year, which was a little faster than for the labor force as a whole, +2.8%. With respect to average weekly earnings, however, the comparison turned slightly unfavorable, +2.4% versus +2.5%.

Excluding bosses, the advantage for construction workers in hourly earnings, +3.3% y/y versus +2.4% y/y, was drastically reversed in weekly earnings, +1.1% compared with +2.1%.

On a percentage change basis, U.S. total employment is now +1.7% year over year. Jobs with private service-providing employers are increasing faster, +2.1%. In goods-production, manufacturing is stumbling, -0.4%, but construction is forging ahead, +3.0%.