The Census Bureau’s put in place construction statistics, as featured in Table 1, are similar to progress payments as projects proceed. 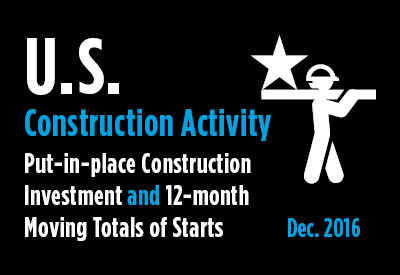 When Table 1 was compiled a quarter ago, for September 2016 data, there were only two stars in the ‘speeding up’ column.

In current Table 1, however, there have been significant reversals. Both ‘Total Construction’ and ‘Total Residential’ are now judged to be speeding up and nine of the 16 subcategories (i.e., a majority) have picked up the pace.

In other words, the Census Bureau (i.e., the ‘public’ monitor in the headline) in the fall of 2016 was saying that the construction sector had become mired in a swampy place. Since then, it has broken free and is now walking with some spring in its step.

For example, the residential, nonresidential building and engineering figures for June 2016 are the sums of their monthly numbers for July 2015 through June 2016.

December of each year, being the sum of the previous 12 months, is also the annual total.

A positive feature of this methodology is that a rolling forward 12-month total eliminates the effects of seasonality.

Graph 1 highlights how much more severely residential construction was impacted by the Great
Recession than was nonresidential building work. Engineering/civil construction barely felt a twinge.

The 12-month total for residential starts has been on the comeback trail since early-2012, but its level has still not fully recovered to where it was in 2006.

Nonresidential building starts have recovered and surpassed their previous peak achieved in 2008, but they’ve flattened out over the past six months.

The curve for engineering/civil starts has been on a gradual upward sloping incline over the 11 years covered, but it has tailed off a bit of late.

The ‘starts’ series, which are essentially groundbreakings, are ‘leading indicators’ for the construction investment or capital spending ‘put-in-place’ series.