The percentage levels and changes in Table 1 are based on the Census Bureau’s seasonally-adjusted (SA) April 2017 and earlier put-in-place construction statistics. ‘Put-in-place’ as a concept is meant to mirror work-in-process or progress payments as projects proceed. 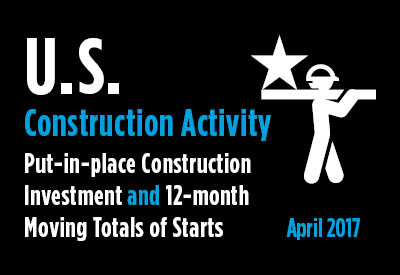 Among the remaining subcategories that account for substantial shares of ‘Total Construction’, only ‘transportation’ (+6.2% versus -7.2%) and ‘highways and streets’ (+8.8% versus -2.0%) are making boldly positive statements.

‘Power’ (+1.0% versus +1.6%), which includes projects centered in oil and natural gas as well as in electricity, continues to move forward, but hesitantly.

‘Manufacturing is staging a retreat (-7.7% versus -6.8%) that has managed to stay orderly as opposed to becoming a rout.

For example, the residential, nonresidential building and engineering figures for April 2017 are the sums of their monthly numbers for May 2016 through April 2017.

Worth noting is that December of each year, being the sum of the previous 12 months, is also the annual total.

A positive feature of this methodology is that a rolling forward 12-month total eliminates the effects of seasonality.

Graph 1 highlights how much more severely residential construction was impacted by the Great
Recession and its aftermath (2009 through 2011) than was nonresidential building work.

The 12-month total for residential starts has been climbing out of its deep pit since early-2012, but its level has still not fully returned to where it was in 2006.

The residential subcategory’s trough-to-current-position jump has been slightly over +100%, but a further rise of +40% will be needed to again scale 2006’s ‘peak of Everest’.

Nonresidential building starts have recovered and surpassed their previous pinnacle achieved in 2008, but they’ve lost upward momentum since mid-2016. They’ve been flattening out and in the latest period, they went into a (hopefully temporary) tailspin.

It appears a boost has been provided by public works projects and that’s before the adoption of the much anticipated ‘infrastructure spending package’ promised by the new administration in Washington − although uncertainly persists as to the scope and timing of the financing that will ever become available.

In a time-line representation or visualization, the ‘starts’ series, which are essentially groundbreakings, are ‘leading’ or ‘out-front’ indicators for the construction investment or capital spending ‘put-in-place’ numbers.