The Census Bureau has just released its December 2017 put-in-place construction statistics. ‘Put-in-place’ as a concept captures work-in-process or progress payments as projects proceed. 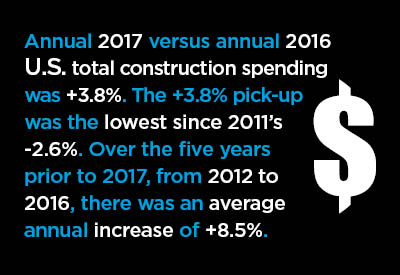 One chief benefit of having December results is that the full year now comes into better focus. Annual 2017 versus annual 2016 U.S. total construction spending was +3.8%.

Within the latest data set from the Census Bureau, there are indications that last year’s soft spot in construction spending may be ending and that the future is brightening once again.

Specifically, the latest quarterly results (Q4) for many of the key type-of-structure categories are picking up the pace relative to their prior three-month results (i.e., Q3). Table 1 sets out the shifts that are underway.

Then a check mark is place in one of the two far-right columns, depending on whether spending in the type of structure is speeding up or slowing down. A further explanation of what constitutes ‘speeding up’ or ‘slowing down’ appears in italics at the end of this section.

By the way, with publication of data for December, the background latest year-to-date and latest 12-month put-in-place numbers are the same – which is to say, they are the annual totals. Hence, the percentage changes in columns three and four are the same.

Table 1 highlights that put-in-place spending for ‘total construction’ and for ‘nonresidential construction’ have been speeding up of late. The former has accelerated from +3.8% to +7.1% and the latter has shifted from -0.6% to +9.5%. Residential, however, has moved in the other direction, from +10.4% as an annual change to +3.9% as its latest-three-month change.

Among nonresidential subcategories, five have check marks in the ‘slowing down’ column and ten (i.e., twice as many) in the speeding up column. One (‘power’) has been neutral.

There have been subcategories that have eased back, but none that have slipped outrageously.

For my commentary on the 2017 annual put-in-place construction results within the context of the past several years, please refer to the article at ConstructConnect’s corporate website entitled: Construction Spending Climbs to All-time High in December.

Residential starts have exhibited mainly steady upward progress since recovering from a cyclical bottom in the summer of 2011. At $300 billion in 2017, however, they have still not caught up with the peak of $375 billion they achieved in 2006.

The slope of the curve for engineering/civil starts has been demonstrating some lift over the 12 years from 2006 to the present, but the degree of the incline has been modest. In 2017, engineering starts did move higher faster thanks to groundbreakings on several petrochemical mega projects.