The U.S. pipeline company, Kinder Morgan, having already spent a wheelbarrow load of money and still having no assurance that its Trans Mountain expansion project will ever by allowed to proceed, has issued an end-of-May deadline for the removal of obstacles in its path. 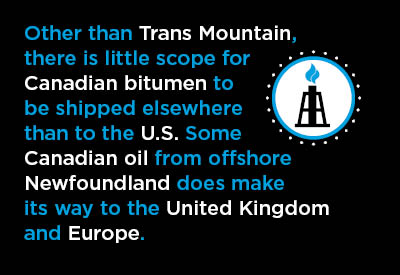 The proposed new investment by Kinder Morgan will triple capacity along an existing line.

Other than Trans Mountain, there is little scope for Canadian bitumen to be shipped elsewhere than to the U.S. Some Canadian oil from offshore Newfoundland does make its way to the United Kingdom and Europe.

Crude from Alberta’s oilsands is referred to as land-locked. For foreign distribution, most of it can only be sent south. Because terminals in Oklahoma and Texas receive a glut of Canadian oil, they offer a relatively low price per barrel.

Annually, billions of dollars are lost in the exchange.

Allowing the roadblocks to Trans Mountain’s plans erected by environmentalists, Native Rights groups and other assorted lobbyists to remain standing would be folly.

Pipelines as a method of moving oil (i.e., as opposed to the usage of railway tank cars) have an established history of reliably safe operation.

Below are 20 other compelling reasons to support Kinder Morgan’s Trans Mountain pipeline expansion.