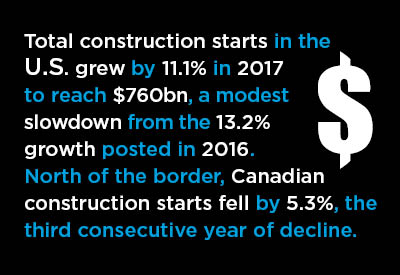 Civil engineering was the main driver of growth, boosted by a number of mega-projects in the airport, power and miscellaneous civil engineering (which includes oil & gas) segments. Despite a strong impetus from factory construction, nonresidential building grew by a more modest 3.5%, but this comes on the heels of 20%-plus growth in the previous year. Residential construction rose by 12.9%, with stronger growth in the multi-family segment than in the single-family segment. This came against a backdrop of stronger GDP growth, which accelerated to 2.3%, from 1.5% in 2016.

North of the border, Canadian construction starts fell by 5.3%, the third consecutive year of decline. Civil engineering starts experienced the steepest decline, dragged down by the miscellaneous civil sector. But the oil & gas price has recovered from its low in early-2016 and Canadian firms have adjusted to a new lower price level, so 2017 should be the cyclical trough. Residential construction also contracted, by a more modest 6.1%, dragged down by concerns about affordability in many of the major cities. In contrast, nonresidential building starts grew by 26.1% with triple-digit annual increases in a number of subsectors. However, this looks less impressive in the context of a 32% decline in 2016, so nonresidential starts are below their level in 2015.

US year in review

US economic activity gained strength through the course of 2017. GDP grew at an annual rate of 1.2% in Q1, rising to an annual rate above 3% in the subsequent two quarters, before easing to 2.6% in Q4. In 2017 as a whole, GDP growth was 2.3%, up from 1.5% in 2016. Several factors combined to underpin this improvement. First, the labor market improved through the year – the economy added an average of 171,000 jobs per month and the unemployment rate fell from 4.7% in December 2016 to 4.1% a year later. Although wage growth was not as strong as might have been expected given the low unemployment rate, average hourly earnings have been gradually improving. This, combined with the strong labor market, supported a 2.7% increase in household spending. In addition, an acceleration in the investment cycle was underpinned by solid business confidence, improving external demand and the multiplier effect of renewed investment in the oil and gas sector through supply chains. The improvement in the global economy was evident in a 3.4% increase in exports, but strong domestic demand also saw imports grow 3.9%, so net trade made virtually no contribution to GDP growth. The Federal Reserve increased its benchmark interest rate three times through the course of the year, by 25 basis points each time.

Engineering construction starts benefitted from a number of mega projects in the airports, power infrastructure and other civil engineering (which includes oil & gas projects and pipelines) categories. In particular, airport construction increased by 87.1% with new projects started at LaGuardia, Reagan National Airport and LAX. Power plant construction increased more than fivefold in 2017, underpinned by ground-breaking of large projects in California, New York and Florida. The recovery in the West Texas Intermediate oil price from a low of $26 in early-2016 to $60 by the end of 2017 has resulted in US oil producers returning to profit, and as a result, they have been expanding capacity. Major projects started in 2017 classified in the miscellaneous civil sector included the construction of three pipelines in Pennsylvania, Texas and Michigan. Starts of miscellaneous civil engineering projects increased by 33.2% in 2017, but this followed a 38.6% decline in the previous year, so starts are still 18% lower than their level in 2015.

In the nonresidential building segment, construction of two large oil and gas plants in Texas and Pennsylvania (which were classified in the manufacturing sector) led to a nearly 70% increase in factory starts in 2017. Construction of new sports stadiums also rose sharply last year, up almost 90%, underpinned by ground-breaking on two new football stadiums in Los Angeles and Las Vegas. Growth was also strong in 2017 courthouses, prisons, hotels and warehouses, the latter particularly benefiting from a structural shift to online shopping. There were declines elsewhere in the nonresidential sector, however, often following strong increases in the previous year. Such sectors include new construction of parking garages, government office buildings, hospitals and retail.

Among the four major regions, 2017 construction starts were strongest in the Northeast with annual growth of 21.2%. This figure was boosted by two mega-projects in the oil & gas sector in Pennsylvania, which underpinned regional growth in the nonresidential and civil engineering sectors. New construction in the residential sector declined in the Northeast, which is unsurprising as its demographics are less robust than in the South and West. The Midwest and the West also experienced strong construction growth of 11.8% and 11.1% respectively. The West also had the strongest growth in GDP and demographics in 2017, so it is unsurprising to see strong construction activity. The Midwest, on the other hand, is perhaps a bit more surprising, since its demographics and economic growth are less robust. The strong rise in the Midwest was related to construction of a large residential project in Chicago and a water & sewage treatment facility in Michigan. Although it is a smaller state, the strongest annual growth was in South Dakota, where construction in the miscellaneous civil engineering sector has recovered robustly after an oil-related decline in 2016.

GDP growth in Canada is estimated at 3% in 2017 (with data through Q3), a pick-up from the 1.4% pace of growth posted in 2016. In the first two quarters of the year, GDP grew at an annualized pace of around 4%, but in Q3 that pace slowed to 1.7%. The Canadian labor market is particularly strong – the economy has created jobs for the past 13 months, and the unemployment rate is now at a 40-year low of 5.7%. As in the US, wages have also been firming. Taken together, this has underpinned consumer spending growth estimated at 3.6% in 2017. Following two years of decline, corporate investment returned to growth in 2017. However, at just 1.5%, business investment growth was not as strong as in the US, despite the steep downturn following the oil price decline. Likewise, the pick-up in export growth was not particularly strong given the recovery in world demand, and at the same time, growth in imports was more robust, so trade made a negative contribution to growth.

New construction activity in Canada was weak in 2017, with total starts shrinking by 5.3% on the year. This is worrying, since construction starts also declined in 2015 and 2016, by 10.1% and 22.9% respectively. Overall, the 3-year slump has left new Canadian construction activity nearly 35% below its 2014 peak. Civil engineering starts experienced the steepest decline, shrinking by 20.5%. Miscellaneous civil engineering projects, which include projects in the oil & gas sector, declined by some 53.4% and after three years of decline, are currently 91% below their 2014 peak. Unlike fracking in the US, the Canadian oil sands have not undergone a significant productivity renaissance and fixed costs are extremely high, so firms have been unable to ramp up production as strongly even with rising prices. Construction of new power plants also experienced a steep decline in 2017, falling by 91%. And after a 27.5% decline in 2016, the sector is some 93% below its peak in 2015.

Residential construction activity fell by a more mild 6.1%. A 4.9% increase in single-family homebuilding was more than offset by a 19.6% decline in the multi-family segment. Multi-family home construction is concentrated in the major cities, where affordability has been a concern for some time. However, it is worth noting that the declines in 2017 were seen across all regions, not only in the major cities.

Nonresidential building activity, by contrast, increased by 26.1% in 2017, although this follows a 32.6% decline in 2016. Several subsectors experienced annual growth of more than 100%, including manufacturing, hospitals and police and fire. However, in all cases, 2017’s rise came after a sharp decline in the previous year.