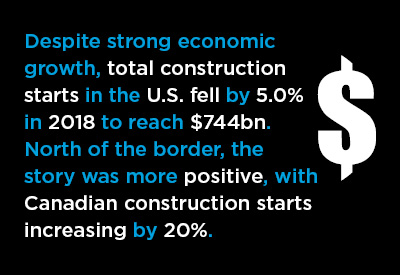 Despite strong economic growth, total construction starts in the US fell by 5.0% in 2018 to reach $744 billion. Residential construction starts experienced the steepest decline, by 9.5%, dragged down by a 26.7% contraction in new multi-family units. Nonresidential building starts fell by 7.1%, but a number of large projects in 2017 fell out of the annual growth calculation, exacerbating the annual decline. By contrast, civil engineering starts increased 8.8%, boosted by new pipeline and bridge projects.

North of the border, the story was more positive, with Canadian construction starts increasing by 20%. Growth of more than 80% in the nonresidential sector was boosted by large projects in the transportation and industrial sectors. A large bridge project supported growth of 10.1% in civil engineering construction. However there are signs that efforts to cool the housing sector may be starting to bite--residential construction starts dipped by 14.8%.

U.S. economic activity was robust through the course of 2018. GDP grew at an annual rate of 2.2% in Q1, accelerating to an annual rate above 4% in Q2, before slowing back below an estimated 3% in Q4. In 2018 as a whole, GDP growth is estimated at 2.9% (with data through Q3), equalling the fastest pace since the end of the global financial crisis. Several factors combined to support stronger economic activity. First, the labor market remained strong – the economy added an average of 220,000 jobs per month and the unemployment rate was below 4% for most of the year, the lowest rate since the late-1960s. Wage growth, elusive since the global financial crisis, has improved, with average hourly earnings increasing 2.9% in 2018. The business sector was also strong, boosted by the corporate tax cut at the end of 2017. Despite signs of slowing external demand, exports continued to rise by a healthy 4.1%, but strong domestic demand saw imports rise 4.7%, so net trade made a small negative contribution to GDP growth. Strong economic activity led to the Federal Reserve increasing its benchmark interest rate four times through the course of the year, by 25 basis points each time.

Despite the economic strength, new construction activity faltered in 2018. Total construction starts declined by 5% for the year as a whole. Residential starts experienced the sharpest decline, down 9.5%. Nonresidential starts contracted 7.1% as a number of large projects in 2017 fell out of the annual calculation. New civil engineering projects, by contrast, continued to expand, growing by 8.8% in 2018.

The steep decline in the residential sector was driven by a 26.7% decrease in the multi-family segment. In general, construction of multi-family units has outperformed that for single-family since the end of the global financial crisis, so the scope for catch-up growth is more limited. 2018’s steep decline comes after a 35.7% increase in the previous year, so it likely represents a normalization from a strong 2017. Multi-family starts tend to be dominated by larger projects, and as a result, experience larger swings in their annual growth from year to year. Although construction of single-family units continued to rise, their annual growth slowed markedly to 0.6% in 2018, the worst performance since 2011.

In the nonresidential building segment, a number of large projects in 2017 fell out of the annual growth calculation, exacerbating the 2018 contraction. Sectors experiencing double-digit declines include hotels & motels, shopping centers, parking garages, sports stadiums and convention centers, libraries and museums, and courthouses. In the sports stadium category in particular, groundbreaking in 2017 began on two new NFL stadiums in Los Angeles and Las Vegas, which was not repeated in 2018, so starts declined by over 50%. Industrial construction starts grew by more than 80% in 2017, driven by ground-breaking on a $10 billion Exxon Mobil plastics plant in Texas and a $6 billion Shell ethane cracker plant in Pennsylvania. Despite these two projects dropping out of the annual calculation, manufacturing construction only fell by 6.8% as construction on a new $10 billion Foxconn plant in Wisconsin helped limit the extent of the decline. Transportation terminals, by contrast, grew 35.6%, underpinned by a mass transit expansion project in Los Angeles and an expansion to the Long Island Rail Road in New York.

Growth in engineering construction was boosted a number of new pipeline projects, classified in the miscellaneous civil sector. Construction started on three major pipelines in 2018: a $5.5 billion project in West Virginia, a $3.5 billion project in Virginia and $2.2 billion project in Texas. The recovery in the oil price from its low in early-2016 has spurred large investments in oil & gas, and the risk of downstream bottlenecks in pipeline transport has encouraged building. US producers remain profitable at current prices, even after the fall in the oil price since late-2018. Elsewhere in the engineering segment, construction of dams, canals & marine projects also increased at a double-digit pace on large projects in Florida, New York, and Washington state. Bridge construction was also strong, underpinned by two projects in Texas and one in Colorado. Only airport construction experienced a double-digit decline in 2018, but mega projects at LaGuardia, Reagan International Airport, and LAX started in 2017 all fell out of the annual calculation.

GDP growth in Canada is estimated at 2.1% in 2018 (with data through Q3), a slowdown from the 3% pace posted in 2017. Household activity, the main driver of growth since 2015, has started to slow. The labor market continued to add jobs through the course of 2018, an average of 19,600 per month, but job growth has slowed from its pace of 28,100 per month in 2017. Average hourly wage growth accelerated to 2.9%, but inflation has also risen, weighing on real earnings. Moreover, high levels of household debt have left consumers vulnerable to rising interest rates. Consumer spending grew at a reasonable 2.2% in 2018, but this was a significant slowdown from the 3.5% growth posted in 2017. Business investment growth, by contrast, accelerated during 2018, growing by 4.8%. This was underpinned by a strengthening in the oil sector, diminished economic uncertainty with the passage of the USMCA, and high levels of capacity utilization. A strong U.S. economy boosted export growth to 3.2%, but imports increased at roughly the same pace, so net trade made virtually no contribution to growth.

In contrast to the U.S., new construction activity in Canada was strong in 2018, with total starts growing 20% on the year. However, the total masks considerable variation within the headline sectors--a number of megaprojects boosted activity in both nonresidential and civil engineering construction while residential construction starts declined. Nonresidential building construction, in particular, increased 80% in 2018. Construction of transportation terminals rose nearly 1400%, driven by groundbreaking on a new metro line in Montreal. Factory construction was also robust--after 415% growth in 2017, groundbreaking of new manufacturing facilities increased by a further 427% in 2018. This was underpinned by work on a new $10 billion LNG plant in British Columbia and a $3.5 billion plastics facility in Alberta.

Engineering construction increased by 10.1% in 2018. Bridge construction, in particular, grew by 314%, boosted the groundbreaking on the $4 billion Gordie Howe International Bridge between Windsor, Ontario, and Detroit. Water & sewage projects, by contrast, declined by 37.5%, but the sector grew 176% in 2017 and some large projects in British Columbia and Alberta dropped out of the annual calculation. Construction of new power infrastructure was also weak, declining 33%, perhaps more surprising given it had also fallen by 62% in 2017.  Miscellaneous civil engineering projects, which include projects in the oil & gas sector, declined by 8.3%, although there was a large project towards the end of the year in the form of a $2.6 billion oil sands plant in Alberta. Canadian oil & gas firms have made a structural adjustment to cope with the lower price environment, and there are a number of projects in the pipeline, so it should be a strong area of growth over the coming year.

Residential construction activity fell by 14.8% with similar declines in both the single-family and multi-family segments. The government has implemented a number of macroprudential policies to cool growth in the housing market, and recently, the housing market has shown signs of slowing. Rising interest rates have exacerbated this trend, especially given elevated household debt levels.