In January, net new U.S. jobs creation was +200,000, according to the latest Employment Situation report from the Bureau of Labor Statistics. The +200,000 jobs figure was greater than the monthly average increase throughout last year of +176,000. 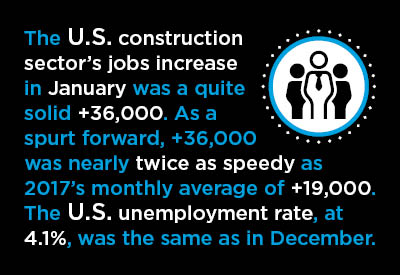 The unemployment rate in the latest month stayed the same as in December, at 4.1%. Only rarely in the past has the jobless level been better. The last time it managed to slip below 4.0% was seventeen years ago, in 2000 at the beginning of the new century.

The ongoing strength in employment continues to find confirmation in the weekly initial jobless claims data. At the height of the Great Recession, the number of first-time unemployment insurance seekers in the economy soared to a truly unpleasant peak of 653,000.

A figure of 300,000 or less is generally considered by analysts to be the benchmark for when the labor market is ticking along smoothly. After the Great Recession, it seemed to take forever for initial jobless claims to recede to the 300,000 level.

The actual length of time that was covered waiting for that magic moment was six years. It occurred for the week ending March 7, 2015.

Oh how things have changed since then!

There continues to be a mystery, however, as to why the ever-tightening labor market is not squeezing out better financial rewards for workers. After some sizable year-over-year increases in hourly and weekly compensation rates for certain segments of the economy in December, January’s results were unremarkable once again.

From Table B-3 of the BLS’ report, for worker groups including bosses, neither the ‘all-industry’ nor ‘construction’ job categories saw year-over-year hourly or weekly wage gains that reached +3.0% or more.

In December 2017, the weekly pay climb for construction workers had been a robust +4.5%.

For worker groupings excluding bosses (Table B-8 of the BLS’ report), the ‘all-industry’ year-over-year earnings increases in January were +2.4% both hourly and weekly. The comparable figures for construction were +2.9% and +3.1%. In December 2017, construction workers excluding supervisors, recorded a year-over-year weekly earnings gain of +5.3%.

Speculation that the Federal Reserve will be hiking interest rates three times this year, by 25 basis points each step along the way (where 100 basis points = 1.00%), has been predicated on an assumption of growing concerns about inflation.

The argument is often made that an accelerating price level will partly result from more strident labor demands. So far, this scenario has been slow in developing.

It’s not likely, however, that the Fed − which is in the process of switching leadership from Janet Yellen to Jerome Powell − will alter its already-advertised course.

There is an interesting sidebar to the question of why the business sector is so enthusiastic about the increasing rewards it will reap from the favorable restructuring of the tax regime. Many companies think the lower corporate tax rate will provide them with the financial wherewithal to go out and hire the best workers.

The competition to retain elite workers, or to entice them to switch from one employer to another, is heating up.

The not seasonally adjusted (NSA) unemployment rate in construction in January of this year was 7.3%. Twelve months earlier, in January 2016, construction’s jobless level had been 9.4%.

Among other major industrial sectors, ‘education and health services’ and ‘leisure and hospitality’ had good hiring records in January, at +38,000 and +35,000 jobs respectively.

Within ‘education and health services’, it was ‘health care and social assistance’ that provided the bulk of the new staffing, +26,000 jobs.

Further worth noting is the recruiting that has been carried out by hospitals, +13,000 jobs in January.

Within ‘leisure and hospitality’, the big leap forward in jobs creation last month was made by ‘food services and drinking places’, +31,000 jobs.

“Professional and business services’ employment in January was +23,000 jobs. There are now approximately the same number of individuals employed in ‘computer systems design and related services’ (2.1 million) as there are in ‘legal services’ (1.1 million) and in ‘accounting and bookkeeping services’ (1.0 million) added together.

In 2016, the U.S. retail sector had more months of declines in employment than increases. Therefore, it’s nice to see that in January of this year shopkeepers added personnel to the tune of +15,000.

On a year-over-year percentage-change basis, U.S. total employment in January was +1.5%. A +1.5% increase also held true for manufacturing. Private service-providing employment was a bit better at +1.6%.

Construction, though, doubled those paces, at +3.3%.