The previous article took a close look at labor markets in 42 of the most populous cities in the U.S. This current article will do the same for Canada’s 33 largest urban areas. 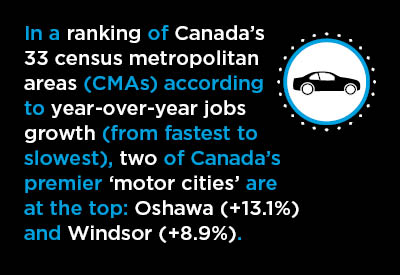 For both countries, the city boundaries encompass downtown cores and all surrounding suburbs with strong back-and-forth commuting ties related to work and residence.

Such geographic designations are known as metropolitan statistical areas (MSAs) in America and as census metropolitan areas (CMAs) north of the border.

The 42 cities in the U.S. are among the 50-plus MSAs that have populations of one million or more each. In Canada, there are only six CMAs with comparable residency counts – Toronto, Montreal, Vancouver, Calgary, Edmonton and Ottawa-Gatineau.

Actually, for Canada, the listing runs from most positive to most negative percentage changes.

Whereas the U.S. has only one major city (i.e., Pittsburgh) experiencing a year-over-year jobs drop at this time, the line-up of Canada’s biggest urban areas is about evenly split. There are 15 CMAs with increases and 18 with declines.

Two of Canada’s premier ‘motor cities’ are at the top of Table 1’s ranking: Oshawa (+13.1%) and Windsor (+8.9%). Graph 1 helps explain why auto assembly and parts work has been on the rise. Motor vehicle sales in the U.S. are cruising along as rapidly as ever and many Canadian suppliers are shipping product south.

Meanwhile, unit sales of passenger cars and light trucks in Canada’s own domestic market have been setting new all-time highs. They are currently 15% above their prior peak in early 2008, before the onset of the Great Recession.

Regionally, B.C. has been establishing a record of labor market dominance, with net jobs +4.2% in Vancouver and +3.3% in Victoria. The total Canada rate of increase is a mediocre +0.8%.

Alberta’s dependence on an energy sector that has seen capital spending flee − due to depressed oil and natural gas prices − is well captured in the year-over-year jobs performances of Calgary (-1.3%) and Edmonton (-2.3%).

In central Canada, where the Quebec and Ontario economies are diverse and not unduly linked to resources, Montreal (+2.7%) is outperforming Toronto (-0.3%).

It would be desirable to disaggregate the total jobs numbers in each CMA and examine changes in construction staffing specifically. The numbers are available in Cansim Table 282-0130.

But the percentage swings for many of the CMAs, because they have on-site workforces that are small, – at least relative to the much larger population centers in the U.S. − are outsized in the extreme.

Therefore, I’m only going to set down the construction jobs changes in the ‘big six’.

With respect to unemployment rates, as set out in Table 2, Vancouver (4.9%) and Victoria (5.0%) once again have good reason to smile. They’re only the smallest of steps behind the two CMAs locked in first place, Guelph and Quebec City (both 4.7%). By comparison, the Canada-wide jobless level is a considerably less bullish 7.0%.

Among the 33 CMAs, Calgary has the worst unemployment rate. Plus, it’s the only city with a jobless level in double-digits, 10.2%.

Similar to what was done for the 42 U.S. major urban areas, I’ve also calculated an extra ranking of the CMAs which combines their jobs performances (fastest to slowest) with their unemployment rates (smallest to largest).

In the ‘composite’ listing – which is not included with this article, on account of a space constraint − the four leading Canadian cities are Vancouver (number 1), Windsor (2), Victoria (3) and Oshawa (4).

Ottawa-Gatineau (spot number 13) and Toronto (24) can be described as at the upper and lower ends of the mid-range. Montreal (17) is ‘smack-dab’ in the middle.

Edmonton (27) and especially Calgary (32) are occupying positions near the bottom of the ‘composite’ ranking.

Based on average of latest three months, unadjusted data.
When the ranking numbers are the same, the cities are in a tie.
Data source: Statistics Canada.
Tables: Construct Connect.