Currently, there are four U.S. large-population cities that are standouts for their strong labor markets – Austin, San Jose, Orlando, and Salt Lake City. 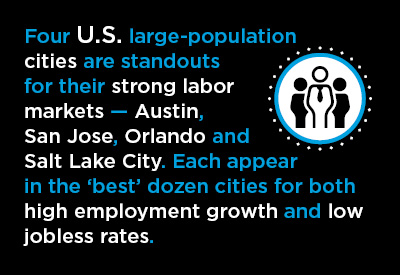 This conclusion is based on rankings of the nation’s 51 metropolitan statistical areas (MSAs) with downtown plus suburban populations of a million or more each in two ways: (1) according to year-over-year jobs growth (with fastest to slowest being best); and (2) by unemployment rates (with lower rather than higher being better).

The results appear in accompanying Table 1. A horizontal line separates the Top 12 on both the jobs growth (left) and unemployment rate (right) sides of the table.

Only the shaded cities, − Austin, San Jose, Orlando, and Salt Lake City, − appear in the ‘best’ dozen for both high employment growth and low jobless rates.

Mention should be made, that three of the cities among the Top 12 for jobs growth have been making those strong advances relative to weak levels of employment (i.e., they’ve been climbing off small bases). Phoenix (2nd for jobs growth), Las Vegas (5th), and Cleveland (11th) are in the bottom three positions (50, 49, and 51 respectively) among all 51 cities for unemployment rates.

Moving to the ‘dark side’ of the table, are the cities that are in the Bottom 12 for both jobs growth and unemployment rates? Yes, sad to say, there are five such MSAs – Chicago, Buffalo, Pittsburgh, Los Angeles, and Detroit.

Returning to the hottest labor markets for final commentary, there’s evidence that feverish conditions in some local markets are having notable impacts on earnings. For Q4 2018 versus Q4 2017, Orlando’s private-sector all-jobs average hourly earnings increased +8.8%, with average weekly earnings even stronger at +10.8%.

Green shade: Cities that are in the Top 12 for both high employment growth & low unemployment rate.
There were 4 in the latest month: Austin, San Jose, Orlando and Salt Lake City.
Based on not seasonally adjusted (NSA) data. / Cities are metropolitan statistical areas (MSAs).
When the ranking numbers are the same, the cities are in a tie.