To better assess some of the regional differences in economic performances across the U.S., this article focuses on the labor market numbers in accompanying Tables 1 and 2. 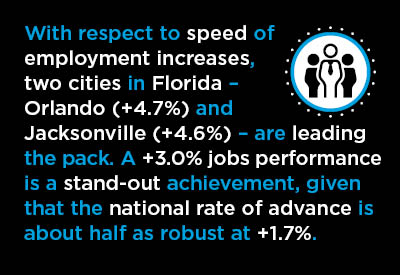 For 42 of the most populous American cities, Table 1 provides a fastest-to-slowest year-over-year jobs growth ranking.

Table 2 shows those same urban centers ordered according to their current unemployment rates, from lowest to highest.

With respect to speed of employment increases, two cities in Florida – Orlando (+4.7%) and Jacksonville (+4.6%) – are leading the pack. Dallas-Fort Worth and San Jose (each +3.6%) are tied for third.

A +3.0% jobs performance is a stand-out achievement, given that the national rate of advance is about half as robust at +1.7%.

Some other highlights from Table 1 are as follows.

Detroit is staging an economic comeback and is currently generating net new jobs at a +2.0% year-over-year rate.

Houston (+0.7%) has fallen well behind its three siblings in Texas.

And Pittsburgh (-0.2%) is the only major U.S. metropolitan statistical areas (MSA) to be recording a decline in year-over-year employment at this time.

Before moving on to unemployment rates, mention should also be made of some significant changes in year-over-year construction employment. For example, the number of ‘hard hat’ jobs in Orlando is presently +17.4% year over year. In Jacksonville, the improvement is +10.6%.

San Jose and Seattle are also seeing large jumps in construction employment, +9.2% and +9.0% respectively. Houston (-4.3%), however, is moving in the opposite direction.

Similar to Boston, Washington and Richmond are high-tech hotbeds on the East Coast. Their jobless levels, at 3.9% and 4.1%, are also commendably tighter than the national average of 4.9%.

San Francisco (3.8%) and San Jose (also 3.8%) are ground zero for cutting-edge job opportunities on the West Coast and neither of those cities needs to take a back seat to anywhere else when it comes to healthy jobless rates.

Las Vegas lived through exceptional punishment during the sub-prime mortgage crisis and its unemployment rate (5.6%) is still elevated.

Pittsburgh (5.6%) is also struggling to find rewarding positions for its out-of-work residents.

By a wide margin, Riverside (6.2%) is encountering the worst level of idled local workforce in California.

Although not shown as an additional table in this article, ConstructConnect has also compiled a third ranking of the 42 cities.

The extra ranking takes the average of each city’s placements in Tables 1 and 2 and uses that number to compile a ‘composite’ listing.

In the ‘composite’ ordering, Denver and Salt Lake City are tied at the top for best labor markets among all 42 cities.

Rounding out the Top 5 are San Jose, Austin and Dallas-Fort Worth.

The next tier of five are San Francisco, Nashville, Orlando, Richmond and Jacksonville. Notice that in the Top 10, the states of California, Texas and Florida provide two cities each.

At the bottom of the composite ranking is New Orleans. Other cities with labor markets that are struggling are Pittsburgh, Houston, Chicago and Philadelphia.

Houston, where energy head offices have come under stress, has seen a particular deterioration in its labor market provisions over the past 12 months.

Based on average of latest three months, unadjusted data.
When the ranking numbers are the same, the cities are in a tie.
Data source: U.S. Bureau of Labor Statistics.
Tables: ConstructConnect.