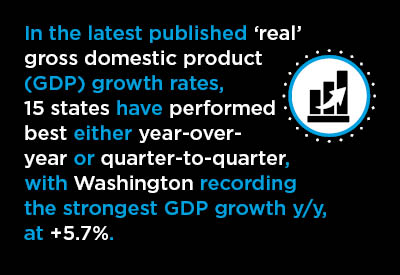 Table 1 sets out the latest published year-over-year and quarter-to-quarter ‘real’ (i.e., adjusted for inflation) gross domestic product (GDP) growth rates for the 50 U.S. states, plus District of Columbia. The data is made available by the Bureau of Economic Analysis (BEA).

The year-over-year comparisons on the left-hand side of Table 1 are based on 2018 versus 2017 results. The quarter-to-quarter comparisons on the right-hand side of the table are for Q4 2018 versus Q3 2018. The q/q percentage changes are compounded to the power of four, making them equivalent to annual growth rates. (The ‘real’ dollar volumes underlying the q/q percent change calculations have been seasonally adjusted.)

Above the first bold horizontal line in Table 1 are the 15 states that have performed best either year-over-year or quarter-to-quarter. Washington recorded the strongest GDP growth y/y, at +5.7%, while Texas ranked number one for q/q gain, at +6.6%.

Seven states were in the Top 15 for both y/y and q/q GDP growth rates. Those seven appear in green shading. They are: Washington, Idaho, Arizona, California, Colorado, Nevada, and Texas.

The ‘magnificent’ seven are all located west of the Mississippi. They stand out for managing not only commendable y/y results, but also for staying buoyant at the end of 2018 and entering 2019 with good momentum.

According to the BEA, the main industrial sub-sector contributors to solid y/y GDP growth in many states were ‘information services’, ‘professional, scientific and technical services’ and ‘durable goods manufacturing’.

For 2018/2017, the first of those three bullish sub-sectors provided a boost to Washington, the second propelled Utah’s economy forward and the third was a great help to Idaho. The biggest private-sector employer in Idaho is the Albertsons grocery chain, but the state is also home to computer chipmaker, Micron Technology.

With respect to q/q GDP growth, the leading industrial sub-sector contributors to many state GDP advances, according to the BEA, were ‘wholesale trade’, ‘mining’ and ‘information services’.

All five states at the top of the q/q ranking in Table 1 have recently been aided by pickups in ‘mining’, a designation which includes fossil fuel activity. Texas, Wyoming, Oklahoma, Alaska and New Mexico have been the prime beneficiaries.

The 7 States With the Weakest GDP Performances

Below the second bold horizontal line in Table 1 are the 15 states that performed weakest year-over-year and quarter-to-quarter. Again, the number seven crops up. There were seven jurisdictions that were among the poorest 15 both y/y and q/q.

As laggards, Iowa, Louisiana, Hawaii, Mississippi, Montana, Rhode Island, and Delaware have been shaded blue. They not only walked slowly on an annual basis in 2018, but they still hadn’t picked up the pace as year-end rolled over into 2019.

On an encouraging note, though, there’s only one instance of a negative percent change in the entire table. Alaska’s GDP was -0.3% y/y. Delaware barely escaped similar notoriety, with a flat showing q/q (0.0%).

What’s most noteworthy in the middle section of the table? First, Georgia and Wisconsin almost made it into the elite tiers at the top of the table. Second, there were three states that were truly middle-of-the-road. Missouri, New Hampshire, and New Jersey occupied ground that was neither especially elevated nor particularly pitted both y/y and q/q.

As points of reference, the averages for the 50 states plus D.C. were +2.1% y/y and +2.0% q/q. ‘Means’ or averages are not the same as the ‘official’ figures for the whole U.S. The latter incorporate diverse weightings based on the size of state economies.

Table 1: U.S. States Experiencing Fastest and Slowest 'Real' GDP Growth
''Real' is adjusted for inflation. 'Annualized' is Q/Q compounded to the power of 4 to yield 'annual' equivalency.
When the ranking numbers are the same, the states are tied.
Data source: Bureau of Labor Statistics (BLS).
Table: ConstructConnect.