Well this is a fine pickle, I must say. I’m about to try writing a Nuggets report based on the latest statistical releases and many of the U.S. economy’s key data series have not been updated due to the federal government shutdown. Workers at the Bureau of Labor Statistics (BLS), which compiles jobs numbers and inflation rate figures, are still toiling away. But workers with the Census Bureau, which monitors foreign and retail trade, plus housing starts, are off the job. 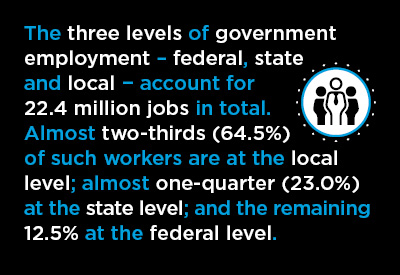 The number of individuals employed by Washington on a normal workday is a little less than three million. Of that total, and with their paychecks being withheld, 800,000 are now staying at home or working for free. The figure grows considerably larger when sidelined contract workers are included in the tally. To date, this is taking a minor toll on consumer spending, but the impact will become more onerous the longer the stalemate between the President and the House lasts.

Prior to recent developments, the story concerning government employment has been largely snooze-inducing. The three levels of government employment – federal, state and local − account for 22.4 million jobs in total. The shares provided by each level have stayed relatively constant over the past ten years. Almost two-thirds (64.5%) of such workers are at the local level; almost one-quarter (23.0%) at the state level; and the remaining 12.5% at the federal level.

There was a huge spike in the federal government index in 2010, but that was tied to drafting an ‘army’ of short-term workers to carry out the decennial census. Apart from that exception, the payrolls of all three levels of government have stayed mostly flat. There were some decreases that were most pronounced in 2013 and 2014, but at the end of 2018, the payroll counts of federal, state and local government were nearly exact matches for their positions in July 2009.

The ‘all-jobs index’, however, has been consistently shooting higher. Since July 2009, the compound annual rate of total employment increase in America has been about +1.6%.

Let’s move on to some other recent findings concerning the U.S. and Canadian economies:

(2) In the U.S., 2018’s largest project initiations were topped by the Foxconn Technology Group’s new manufacturing plant in Wisconsin, with an estimated value of $10 billion. Pipelines in Virginia, West Virginia and Texas were also important to last year’s total starts level. In Canada, the two biggest projects to get underway in 2018 were the LNG export terminal in northwestern B.C. and the Réseau Express Métropolitain (REM) subway project in Montréal.

(3) While many of the building subcategories struggled a bit to make dollar-volume ‘starts’ headway last year, 2018 was good for roadwork in both countries, +20% in the U.S. and +36 in Canada. Bridge work also had a banner year in 2018. There was groundbreaking on the $4 Gordie Howe Bridge between Detroit and Windsor, and there were numerous bridge projects scattered around the U.S. – in Boston, New York, Washington, Houston, Dallas, and Denver.

(4) 2018 was also an exceptionally fine year for start-ups on high-tech data and fulfillment centers in the U.S. Apple, Amazon, Facebook, and Microsoft all contributed at least one project to ConstrucConnect’s monthly ‘Top 10 Project Starts’ lists throughout the year. By the way, the total dollar volume of the 120 projects in the U.S. monthly Top 10 lists in 2018 was $85.4 billion (USD). The comparable figure for Top 10 projects north of the border was $43.9 billion (CAD). Both countries have truly mega-sized projects; but the U.S. has extra ‘second-tier’ big projects.

(5) The Consumer Confidence Index of the Conference Board has been pulling back of late. It fell modestly in November, but retreated more in December, from 136.4 to 128.1. Given that the base level for the index is 1985 = 100.0 (i.e., when expectations were neither too ebullient nor too down-in-the-dumps), it remains quite high. But the trend warrants further watching. The Conference Board’s Expectations Index in December dropped to 99.1 from 112.3 in November.

(7) In lieu of data on U.S. retail sales, which are normally calculated by the Census Bureau (where the workforce is currently idle), I’m including a fascinating graph that shows how Internet and E-auction sales have been chasing and gaining on general merchandise store sales since 2006. In 2006, receipts by the former were less than half what was being rung up at cash registers by the latter. News flash: the pursuit is over and equivalency has been achieved.