The U.S. ‘all-items’ Consumer Price Index (CPI) in April was +2.0% year over year. The ‘core’ rate of inflation, which omits mainly food and energy items that display notable price volatility, was +2.1% y/y. It seems that inflation, at least for now, has become untethered from what is transpiring in the economy at large. A highly-charged jobs market and solid gross domestic product (GDP) growth aren’t causing the usual (i.e., pre-recession) ascending price effect. 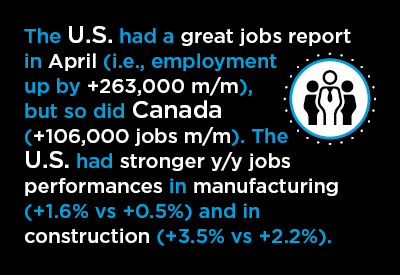 Technological advances by leading firms in many industries have helped to keep price increases restrained. Examples include Amazon in retail; Uber in ride-sharing; and iPhones in photography.

The big economic issue at present is the escalation of America’s trade dispute with China. The major stock market indices, which were recovering nicely from setbacks in December, have lately been wobbling once again. Investors had the impression that a trade deal was imminent.

The Federal Reserve has come under criticism for paying more attention to the stock markets than the ‘real economy’ when setting its interest rate policy. Since inflation has been taken out of the equation, it will be interesting to observe what will prompt the next Fed interest rate move.

With the foregoing as backdrop, there are also the following nuggets to be gleaned from the latest public and private agency data releases. The soil is fertile and the crop abundant.

A decade ago, there was much talk about the dangers to the U.S. economy from the ‘twin deficits’. Those ‘twins’ were shortfalls of $1 trillion in foreign trade and in Washington’s budget. For a time, after the recession and with the U.S. becoming more self-reliant in energy, the trade disparity grew smaller and the federal government made a greater effort to align expenditures with revenue. More recently, however, the deficits have been shooting back up again. The ‘goods and services’ trade gap is -$600 billion annualized, but it includes a substantial ‘services’ surplus. For ‘goods’, the trade deficit is approaching -$1 trillion. On the fiscal side, spending by Washington is now expected to exceed receipts by $1 trillion. The ‘twin deficit’ problem is back.

The various impositions of tariffs by the Trump Administration are measures to right the foreign trade imbalance. While there have been tariff introductions on a host of products (e.g., steel and aluminum, with cars possibly next) from an array of countries, the primary target has been China. Each month, China accounts for between 45% and 50% of the U.S. ‘goods’ trade deficit. Washington believes it has the leverage to win concessions from Beijing with respect to protection of intellectual property and sales access to the vast and growing Chinese middle-class market. That’s the big picture. There are, however, ‘finer brushstrokes’ to consider.

Half of the U.S. trade deficit each month is in consumer goods. Shipments from China of apparel, household merchandise and electronic products certainly play a major role in satisfying the consumer demands of Americans. A quarter of the U.S. trade deficit, though, is in motor vehicles and automotive parts, and China’s participation on that front is minimal. As shown in the table below, which sets out U.S. auto sector trade imbalances with key partners, China’s share of the deficit year to date in 2019 is only 4%.  Mexico takes the biggest slice, at 44%, followed by Japan (25%), South Korea (10%) and Germany (9%). The U.S. is in mild surplus with Canada.

Also, there may be a misconception about the importance of the U.S. marketplace to Chinese exporters. By no means is the U.S. the sole and overriding destination for Chinese foreign goods sales. Approximately half of Chinese exports are sold to other Asian nations. One-fifth (20%) go to customers in Europe. Another 20% are assigned to buyers in North America (U.S., Canada and Mexico). The remaining 10% are shipped mainly to Australia, Latin America and Africa.