Tables 1 and 2 accompanying this article set out the latest (March 2018) year-over-year jobs growth and unemployment rate rankings for the 51 largest (by population) U.S. metropolitan statistical areas (MSAs). The raw data comes from the Bureau of Labor Statistics (BLS). 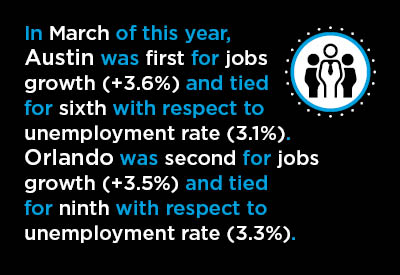 The objective for any city is that its jobs growth be faster rather than slower and that its unemployment rate be lower rather than higher. The total U.S. pace of employment gain has most recently been +1.5% year over year, while the national jobless rate has dropped to 3.9%.

Austin is a major center for high-tech, with a focus on interactive digital media. The well-known and gaining-in-prestige South by Southwest (SXSW) film and music festival, held in March of each year, was founded in the city in 1987. Also, the computer-maker Dell is headquartered in Round Rock, a suburb of Austin.

San Jose lies at the heart of Silicon Valley, California. Large cap, small cap and venture capital firms in the knowledge-based sector abound.  One offshoot of San Jose’s success has been that the price of housing has soared into the stratosphere. According to the National Association of Realtors (NAR), the median price of an existing single-family home in San Jose in the first quarter of 2018 was $1.373 million. The second most expensive city in the U.S. for a resale single-family residence in Q1 was San Francisco, but at ‘only’ $917,000.

Orlando, with its world-renowned amusement parks (e.g., Disney and Universal Studios), has an economy that is largely driven by tourism and convention center activity. Aerospace also plays a sizable role, since the city is within commuting distance of Cape Canaveral and the Kennedy Space Center.

Sitting close behind the three leaders for strong labor markets are Denver, CO and Nashville, TN.

Denver has long been a transportation hub. It also benefits from the presence of numerous government agencies and defense firms, with a leaning towards space contracts. Additionally, the oil and gas sector figures prominently in the local economy. The fictional Carrington family in the television show Dynasty supposedly resides in Denver.

Nashville is a tourism mecca, with a vast music industry being the draw. All the major labels have studios and offices in the city. Plus, Nashville is showing positively on radar screens thanks to companies engaged in health care and automotive production. The country’s largest operator of private hospitals (Hospital Corp of America or HCA) calls Nashville home. And in the motor vehicles and parts sector, Nissan has a notable presence − with an assembly plant not far away in Smyrna, Tennessee.

As a noteworthy sidebar, − and it’s probably not just a coincidence, − three of the Top 5 cities as set out above are state capitals: Austin, Denver and Nashville. The public sector traditionally provides more workplace stability.

Limiting the focus to the Top 22 cities in each table, the regional representation is illuminating.

In Table 1, ranking the year-over-year percentage increases in jobs, 12 of the Top 22 cities (i.e., slightly more than half) are in the South. The West comes second with 9; the Midwest has 1; and the Northeast has none. To drive that last point home, there are no MSAs in the Northeast Region with year-over-year jobs growth that would place them among the 22 most progressive in the land.

In Table 2 listing unemployment rates, lowest to highest, the South again dominates with 11 of the best 22 (i.e., exactly half). The Midwest and West are tied for second with five each. Again, the Northeast is trailing, with only one representative − Boston (3.4% and 12th ranked).

When the ranking numbers are the same, the cities are in a tie.
Figures are not seasonally adjusted (NSA).
Data source: U.S. Bureau of Labor Statistics.
Tables: ConstructConnect.