Hurricane Harvey, which first struck southern Texas on Saturday August 25, and Hurricane Irma, which reached landfall in the Florida Keys on Sunday September 10, will ‘muddy’ the economic statistics for months to come. Estimates of the physical damage range widely, with $200 billion as the current outer limit. 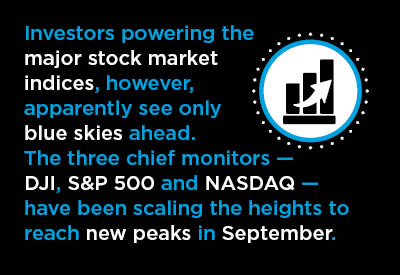 Homes, shopping malls, schools, churches, fast-food outlets, abandoned motor vehicles and fragile vegetation were all victimized, to varying degrees, by storm surges, flooding and crushing winds. In the aftermath, restoring power and ensuring the safety of roads and bridges have been the immediate concerns.

Many building material suppliers and contractors, working together with insurance companies and government relief bodies, will be immersed in lengthy rebuilding efforts. The labor availability problem will become more acute.

Harvey and Irma now rank with Katrina, Sandy and Andrew as the worst storms in the memories of most people. In the history of the U.S., however, there was a hurricane in Galveston, a little southeast of Houston, that was more vicious. When the 8-to-15-foot-high waves hit that low-lying city in September 1900, between 8,000 and 12,000 individuals perished.

It has been made painfully clear, once again, that the natural world can swat the ‘pretentious’ aspirations of humankind off the game board at any time. Nevertheless, economic affairs – powerful in their own way − will continue to unfold and the following sets out a dozen-plus ‘nuggets’ from the latest government agency and private sector data releases.

(1) The Federal Reserve has calculated that, after six month-to-month gains in a row, U.S. industrial production in August declined by -0.9%. Most of that drop (i.e., -0.75 percentage points) was due to the damaging effects of Hurricane Harvey. Manufacturing output in August fell by -0.3%. The change would have been +0.4% if not for the negative impact Harvey had on petroleum, chemicals and plastics refining and processing in the Gulf Coast region.

(2) According to the Fed, America’s total industrial sector in August was operating at 76.1% of capacity, well short of the nation’s long-term (1972-2016) average of 79.9%. Manufacturing presents a similar picture. Its latest capacity-utilization-rate reading is 75.3% which compares unfavorably with the 78.4% average achieved from 1972 through 2016. The improvement in usage rates has been delayed long past when many other measures of economic activity have returned to good health.

(3) The problem for the construction sector is that low capacity utilization rates inhibit capital spending. The volume of ConstructConnect’s August non-residential construction starts was -9.8% compared with July. The year-to-date performance of starts has been ahead by only the slimmest of margins, +1.6%, versus the same January-to-August period of 2016.

(4) In ConstructConnect’s latest starts statistics, the major sub-categories with the largest year-to-date declines have been: ‘retail/shopping’ (-56%); ‘government offices’ (-21%); and ‘hospitals/clinics’ (-18%). The structure types with notable year-to-date pickups have been: ‘hotels/motels’ (+50%); ‘bridges’ (+45%); and ‘roads/highways’ (+15%). ‘Airports’, ‘sports stadiums’ and ‘prisons’ have also been experiencing more active groundbreakings.

(5) The Census Bureau recently reported that the inflation-adjusted median income of U.S. households climbed to $59,000 last year, an all-time high. The unemployment rate stayed tight at 4.4% in the latest month, August 2017. Average monthly jobs creation this year has been close to +180,000. The total number of jobs in the U.S. economy is now 17 million higher than in the Great Recession. Year over year compensation levels for all workers are +2.5% hourly and +2.8% weekly. The latter is more than a percentage point above the all-items inflation rate of +1.7%. There’s lots of money available to fuel consumer spending and spur on more gross domestic product (GDP) growth.

(6) But U.S. ‘retail and food services’ spending is still bowling more ‘spares’ than ‘strikes’. Total earnings of shopkeepers were +3.2% year over year in August. Sad to say, though, that +5.0% or more is generally accepted as the desirable target. Earnings by ‘motor vehicle and parts dealers’ were only +1.5% y/y. ‘Building material and supplies dealers’ and ‘furniture and home furnishing stores’ rang up better receipts of +7.5% and +5.4% respectively. ‘Nonstore retailers’ made sales gains of +8.4%, which isn’t as impressive as it sounds. This category of retail, which encompasses Internet platforms and electronic auctions, has been accustomed to chalking up increases in excess of +10.0% y/y.

(7) Investors powering the major stock market indices, however, apparently see only blue skies ahead. The three chief monitors – DJI, S&P 500 and NASDAQ – have been scaling the heights to reach new peaks in September. All three indices recorded 12-month lows on November 4, 2016. Relative to their values then, and as of their August 2017 month-end closings, the S&P 500 was +19%; the DJI, +23%; and NASDAQ, +28%.

(8) U.S. consumer confidence remains elevated. In August, the Conference Board’s widely-followed index rose to 122.9 from July’s figure of 120.0. The most recent high-point for the measure was March 2017’s 124.9, which was the best level in more than a decade and a half, going back to December 2000. The base level for the index is 1985 = 100.0. In 1985, according to the analysts who study these sorts of things, enthusiasm ran neither too hot nor too cold.

(9) The Purchasing Managers’ Index (PMI) of the Institute for Supply Management (ISM) bobbed up to 58.8% in August from July’s 56.3%. The PMI is now sitting prettiest since April 2011’s 59.1%. Based on the historical relationship between the PMI and national output, the current reading of 58.8%, if it were to be maintained for 12 months, would correspond with ‘real’ (i.e., inflation-adjusted) year-over-year GDP growth of +4.9%.

(11) Coming after an already exuberant +3.7% in Q1, Canada’s GDP growth in Q2 was +4.5%. Both figures are much better than full-year 2016’s +1.5%. On September 6, the Bank of Canada lifted its policy-setting interest rate, the ‘overnight rate’, to 1.00%. The fact the BOC is now in close alignment with the Fed on yields has caused the value of the ‘loonie’ to soar from 75 cents to 82 cents versus the ‘greenback’. The next meeting of the BOC’s rate-setting committee will be on October 25.

(12) Canada is benefitting from an improvement in global trade brought on by what is known as a ‘synchronous’ world expansion. Many countries and trading regions (e.g., Europe) are experiencing their best prospects in years. Prices for some bellwether commodities (e.g., copper) are beginning to skip along the comeback trail. Canadian consumers are certainly in a mood to spend. Year-over-year retail sales in June were +7.3%. But a yellow caution flag keeps being raised over the household-debt to income ratio which just reached an all-time worst 168%.

(13)  Canadian homebuilding continues to defy expectations of a downward correction. Housing starts nation-wide in August were 223,000 units annualized. Monthly average housing starts this year, at 217,000 units, are +10% versus the 197,000 units in the first two-thirds of last year. For Canada’s six cities with populations exceeding one million, year-to-date residential groundbreakings (in units) have been (ranked by percentage changes): Ottawa, +46%; Calgary, +31%; Edmonton, +25%; Montreal, +24%; Toronto, +2%; and Vancouver, -13%.