Canadian total employment in the month of August pulled ahead by +22,000 jobs. 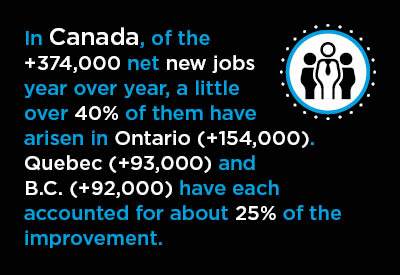 At 6.2%, the current jobless rate is at its lowest level since October 2008 (also 6.2%), which was just before the Great Recession broke into Canada’s house and trashed the place.

Canadian construction employment in August was +5,000, but that left the year-to-date figure at a still lowly +2,000.

Manufacturing employment north of the border in August was -12,000, lowering the year-to-date number for the sector to +48,000. Nevertheless, that’s a welcome turnaround from -40,000 recorded year to date in August 2016.

Construction’s seasonally adjusted (SA) unemployment rate is presently 7.3%, down from 9.1% in August of last year.

(During the worst of the Great Recession, Canada’s construction unemployment rate soared to 12.3% in June 2009. Manufacturing’s level ballooned to 11.8% in May 2009.)

Table 1 shows that Manitoba (4.9%) currently has the lowest unemployment rate among all provinces. B.C. (5.1%) is in second spot. B.C. (+3.9% year over year) has the speediest rate of jobs creation.

Statistics Canada, in its latest data release, says that if it calculated the unemployment rate according to the same stricter standards as in the U.S. (i.e., by the BLS), August’s estimate would be reduced from 6.2% to 5.3%.

The tightness in Canada’s labour market suggests that some capacity constraints may be starting to appear throughout the nation’s economy. The Industrial Capacity Utilization Rates, Second Quarter 2017 report recently released by Statistics Canada reveals the truth behind such speculation.

Fourteen of manufacturing’s 22 sub-categories have usage rates that exceed 85.0%.

The industrial sub-sectors with usage rates of 85% or higher are shaded in blue. Historically, the 85% benchmark has carried special significance. When firms break through it, that’s when they’ll think more seriously about expanding facilities.

Also noteworthy is the fact that only three of manufacturing’s sub-sectors had percentage declines in their usage rates year over year. The nineteen others had increases.

Furthermore, in eight of those instances, the increases were outsized, of +5.0 percentage points or more.