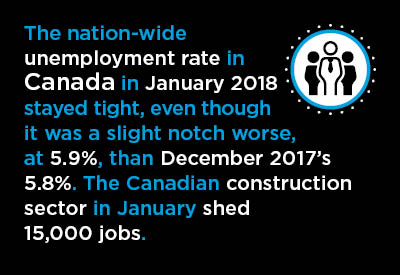 To place the latest month in context, January’s steep slide was the most severe since January 2009’s descent of -125,000 jobs. But in January 2009, the Great Recession was feasting on the economy and the resulting devastation in the labour market was not unexpected.

Furthermore, the composition of that drop seems unusual. There was a +49,000 gain in full-time work that was overwhelmed by a -137,000 step-down in part-time jobs.

December is the month of the year when part-time employment soars the most as businesses hire temporary workers to handle shoppers’ purchases prior to the traditional gift-giving season. Once the holidays are over, many of those seasonal-specific positions quickly disappear.

But that’s why the numbers are run through a seasonal adjustment process. SA as opposed to NSA statistics are supposed to smooth out weather-related and other unusual time-of-the-year wild swings.

Therefore, it’s not unreasonable to wonder if the formula being used to account for seasonality in Statistics Canada’s latest jobs report is failing to perform as well as it should.

Is it possible part-time employment fell because much of it was converted to full-time jobs? Such a scenario is not borne out by the background numbers in either Quebec or Ontario. In the former, the part-time to full-time jobs comparison was -31,000 to only +14,000. In the latter, the disparity was even greater, -59,000 to a meagre +9,000.

The nation-wide unemployment rate in Canada in January 2018 stayed tight, even though it was a slight notch worse, at 5.9%, than December 2017’s 5.8%. In the last section of the written commentary accompanying the Labour Force Survey report, Statistics Canada points out that if its jobless figure were to be reported according to the same rigid standards as are adopted in the U.S. (i.e., with respect to who is truly out of work), it would be a considerably lower and more attention-grabbing 4.9%. (The U.S. jobless figure is presently 4.1%.)

Verification that winter weather in Canada plays tremendous havoc with construction activity can be found in the NSA jobless rates for the sector in the various provinces.

The latest jobs numbers provide an additional justification for the Bank of Canada to be super-cautious in raising interest rates further. Besides the latest misstep in jobs creation, the BOC must be concerned about the long-term shape and/or viability of NAFTA and the direction that stock markets have been taking lately.

The Toronto Stock Exchange (TSX) is down from a January 4 peak, but not to quite the same degree, -8.3%.

It’s almost unbelievable that those kinds of out-sized gains have been sustained for nine years.

Still, until share prices settle down again and a next upbeat wave begins, the investor community will be plagued with twinges of anxiety.

Returning to the provinces for a few closing comments, from Quebec headed west to the Pacific Coast, with the single exception of Alberta, all-worker unemployment rates are low, less than 6.0%. B.C. is best at 4.8%, followed by Quebec along with Saskatchewan at 5.4%. Ontario’s level is 5.5% and Manitoba’s, 5.6%.

Alberta, with a current unemployment rate of 7.0%, is still recovering from the negative effects of mid-2014’s plunge in the world price of oil. In a remarkable show of resilience, however, the province’s jobless rate has dropped by 1.7 percentage points over just the last 12 months.