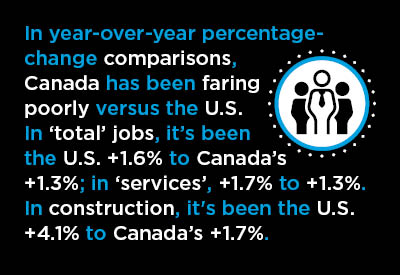 Canada’s Jobs Creation Has Tumbled Since Start of This Year

To date in 2018, Canada has made no forward progress in total jobs creation.

According to Statistics Canada, the latest month’s step back of -8,000 jobs has brought January-to-May’s result to a disappointing -49,000 jobs.

During the first five months of last year, the average monthly change in total employment was +28,000 jobs. The comparable figure for this year has been -10,000.

There have been similar poor performances in many of the major sub-categories of work.

The monthly average change in services employment, January to May of last year, was +20,000, whereas this year, it’s been zero.

The monthly average change in manufacturing employment in the first five months of last year was +9,000. Replace the positive sign with a negative and the result has been -9,000 so far in 2018.

And construction employment has apparently lost the way on its meandering path. Last year’s average monthly jobs change of +1,000 has deteriorated to -6,000 this year.

The national ‘headline’ unemployment rate, however, has stayed low at 5.8% for the fourth month in a row. (By way of comparison, the U.S. jobless rate is currently 3.8%.)

Despite recent lackluster jobs creation north of the border, compensation levels have been rising aggressively. Average hourly wages for all jobs Canada-wide in May were a ‘stand up and get noticed’ +3.9% year over year and average weekly wages were an even more assertive +4.2%.

Among major industrial sub-sectors in Canada, the only one presently recording an especially strong year-over-year advance in jobs is ‘leisure and hospitality’, at +4.7%.

In the U.S., an exceptionally healthy labor market – i.e., one often described as being so tight there is virtual full employment − is providing justification for the Federal Reserve to keep on raising interest rates.

The only question left to ponder is whether there will be two increases of 25 basis points (+0.25%), or three, from now until the end of this year.

In Canada, the central bank has a lot more uncertainty on its hands. Chief among a panoply of worries is the deteriorating trade relationship with America. There are U.S. tariffs on lumber, steel and aluminum to be overcome.

Plus, a continuation of the NAFTA trading arrangement has become endangered.

Nevertheless, the Bank of Canada is hinting that it’s likely to move its key policy-setting interest rate upward in July.

As for labour markets regionally in Canada, British Columbia had the lowest unemployment rate among all provinces in May, at 4.8%. Second- and third-place positions were held by Quebec, 5.3%, and Ontario, 5.7%.

The citizens of Ontario went to the polls on June 7th and, in a bit of shocker, elected a right-wing Progressive Conservative majority government. The PCs have been promising reduced personal and corporate taxes, a reining-in of electricity costs, stiff opposition to some environmental measures and a generally more welcoming climate for business investment.

The Toronto Stock Exchange has been stuck in neutral for years. Among provinces, Ontario with its large population base and well-diversified economy is Canada’s powerhouse.

It will soon be determined whether the new landlord at Queen’s Park will ignite a spark under the TSX.