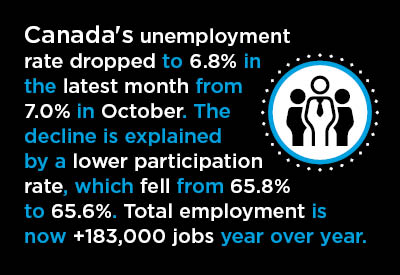 From January through November of last year, the average month-to-month gain in total employment in Canada was +12,000. For the same time frame this year, there has been an improvement to +15,000. If the economy were performing better, a figure closer to +20,000 per month would be expected.

The national unemployment rate dropped to 6.8% in the latest month from 7.0% in October. The decline is explained by a lower participation rate, which fell from 65.8% to 65.6%. In other words, a smaller percentage of the labour force was looking for work in November than in the month before.

There are some interesting differences in unemployment rates according to demographic groupings.

For older individuals, i.e., those aged 55-plus, the jobless rate advantage held by women over men is even more pronounced, 4.7% compared with 6.6%.

Women aged 55 and over are showing the greatest year-over-year increase in employment, +4.8%.

Economists like to see full-time work created ahead of part-time jobs since the former usually provide more stability and higher earnings.

Regionally, British Columbia (6.1%) continues to possess the lowest unemployment rate in the country, but Manitoba (6.2%), Quebec (also 6.2%) and Ontario (6.3%) are doing almost as well.

With respect to year-over-year employment growth, B.C. (+2.1%) is again out front, but Quebec (+2.0%) is nipping at its heels. Ontario and New Brunswick (both +1.5%) are tied for third best among all provinces.

Alberta is having a tough 2016. Its unemployment rate has shot up to 9.0% and the province has lost jobs at a -1.3% year-over-year pace. But a let-up in the thunderstorms may be at hand. The recent agreement among OPEC nations − with Iran as the one notable exception − to cut output in order to raise the global price of oil has strong positive implications for Alberta’s economy.

Canada has six cities with populations of more than a million each. Among that half dozen, Vancouver (5.1%) is currently the frontrunner in a ranking of unemployment rates, lowest to highest. Next in line are Ottawa-Gatineau (6.2%), Edmonton (6.8%), Montreal (also 6.8%) and Toronto (6.9%). Trailing badly is Calgary (10.3%).

As for year-over-year jobs growth, Montreal is the surprising number one placeholder, at +3.4%. Vancouver (+2.5%) is second and Ottawa-Gatineau (+1.6%) third. Calgary and Toronto (both 0.0%) have been neutral on the job creation front and Edmonton (-3.1%) has moved backward.

The number of total jobs in Canada was +1.0% year over year in November, although services-providing employers increased hiring by a much better +1.8%. (The comparable figures for the U.S. were +1.6% and +2.0% respectively.)

How important has construction become to Canada’s labour market? And to the economy overall, for that matter? Graphs 1 and 2, employing straightforward results on employment in the two sectors from Statistics Canada (Cansim Table 282-0088), tell the story.

Since 2000, the number of manufacturing jobs in the country has been in decline, with the steep slope of the descent flattening out to a considerable degree from 2009 onward. (Thanks to robotics and automation, output from manufacturing has not gone into a corresponding tailspin, but that’s a story for another article.)

At the same time, employment in construction has mostly climbed.

Graph 2 sums up the situation succinctly. In 2000, there were three Canadian jobs in manufacturing for every one job in construction.

Now, on account of losses by manufacturing and gains by construction, for every three jobs in the former, there are two-and-a-half jobs in the latter.

What was once a 3:1 ratio, with manufacturing clearly dominant over construction, has almost shifted into convergence.