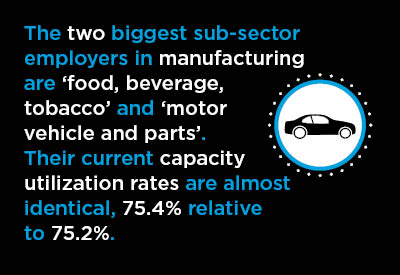 There’s not a lot of encouragement for U.S. contractors in the latest industrial capacity utilization rate numbers. In April of this year, according to the Federal Reserve, ‘total industry’ in America operated at 77.9% of capacity, down from both 79.0% in January, a quarter prior, and from 78.8% in April of 2018, 12 months previously.

Only mining, among major industrial sectors, has had a somewhat upbeat usage rate. For starters, its level of capacity utilization has been much higher, 91.4% in April of this year. Also, its latest level of 91.4% is an improvement over 89.0% in April of last year, although it’s less than the 92.5% figure achieved in January 2019.

The capacity utilization rate is ‘actual’ output as a percentage of full blast output. History has shown that companies don’t begin to look seriously at spending on additional facilities until the plant usage rate in their industrial sector has reached at least 80.0%.

Furthermore, they won’t often commit to capital spending on new square footage when their industrial segment is experiencing a declining capacity utilization rate. Other factors, such as modernization to overcome obsolescence must come into play.

Construction firms take greatest delight in new or additional structures. With generally low and declining plant usage rates, they are facing disappointment. They can, however, derive comfort from renovation work designed to accommodate the introduction of more productivity-enhancing machinery and equipment on existing plant floors.

Table 1 highlights the difficulties being encountered on the capacity utilization rate front.
Within manufacturing, there are only two subsectors with current plant usage rates of 80.0% or more.  Those two are fabricated metal products (81.0%) in durables manufacturing and paper products (85.1%) in nondurables. The former has a usage rate that is up year over year, but down versus a quarter ago. The latter is down on both a 12-months-ago and 3-months-ago basis.

As for April 2019 relative to January 2019, there are nothing but blue arrows, 16 of them. There isn’t a single industrial sector that has recorded an uptick in its capacity utilization rate over the past three months.

Furthermore, the data has been seasonally adjusted (SA). Therefore, time-of-year factors, for example, weather and holidays, are not playing a role.

Negligible Effect of Tariffs on Production at Home

Over the past year, tariffs have been imposed on many of America’s chief trading partners in such product areas as refrigerators, softwood lumber, steel, aluminum and electronic products. A fair question to ask is whether this has been a spur to production at home.

Based on the capacity utilization rates of the subsectors with the most to gain from the tariffs, the answer seems to be in the negative. ‘Wood products’ (74.7%), ‘appliances and electrical equipment’ (71.7%), ‘textile mills’ (71.5%), ‘computer and electronics’ (70.7%), and ‘apparel and leather’ (61.4%) have all recorded plant usage rates recently that are less than three-quarters (75.0%).

‘Primary metals’ (72.9%) is the only subcategory positioned behind a tariff barrier that has raised its capacity utilization rate from a year ago, although it has not shifted over the past three months. In April 2018, ‘primary metals’ was operating at 71.1% and in January 2019, 73.0%.

Most business analysts are relieved that the U.S., Canada, and Mexico have finally reached an agreement to discard their back and forth duties on steel and aluminum.

Moving on from the tariff discussion, the two biggest subsector employers in manufacturing are ‘food, beverage, tobacco’ and ‘motor vehicle and parts.’ Their current capacity utilization rates are almost identical, 75.4% relative to 75.2%.

Usage rates aside, there have been recent groundbreakings on some large industrial construction projects.

In the motor vehicle sector, Alabama’s where the action has been. That state has seen starts on a Toyota-Mazda auto plant and a Mercedes Benz battery factory. Each project is valued at over $1 billion.

Alabama has also starred in aerospace, recently winning a start-up on a Blue Origin manufacturing facility.

In computer electronics, Micron Technology has launched a plant expansion in Manassas, Virginia for $3.0 billion.

Finally, Texas has been big in new mega-sized petroleum and chemical projects, with an ExxonMobil refinery expansion and a new ethane export facility. Texas is also where construction of some of the nation’s largest logistics centers are being initiated.

Net Neutrality and the Construction Industry