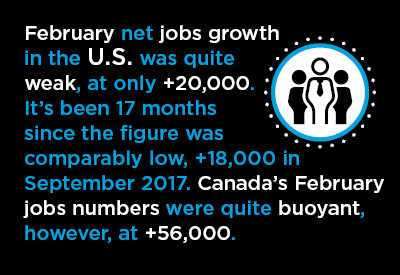 February’s Employment Situation report from the Bureau of Labor Statistics delivered the kind of U.S. total employment change, month to month, that we have become unaccustomed to seeing. Net jobs growth was quite weak, at only +20,000. It’s been 17 months since the figure was comparably low, +18,000 in September 2017.

On the brighter side, the unemployment rate in the latest month improved to 3.8% from 4.0% in the prior period.

There was only one major industrial sector with a substantial pick-up in nominal number of jobs in January, ‘professional and business services,’ +42,000. The staffing increases were evenly and widely spread among segments of the sector (e.g., accounting, design, computer, and help-wanted services).

‘Education and health services’ added just 4,000 jobs, but that was because education services declined by -19,000 jobs. ‘Health care and social assistance’ wasn’t shy about hiring, lifting its combined payroll by +23,000.

In ‘construction,’ the total jobs count fell by -31,000, with the biggest bites being taken out of ‘heavy and civil engineering construction’ (-13,000) and ‘specialty trade contractors’ (-14,000). Within subcontracting work, residential specialists made the deepest personnel cuts (-9,000).

Housing starts dipped towards the end of last year and are still in a funk. ‘Permits’ numbers are more upbeat, and with an upwards climb in interest rates being put on hold, the laying of residential foundations is set for improvement once again.

Construction’s not seasonally adjusted (NSA) unemployment rate in February of this year was 6.2%, down from 6.4% in January and below February 2017’s level of 7.8%. But construction’s place at the top of the leader board for year-over-year jobs growth has come to an end. Instead, ‘transportation and warehousing’ (+3.6%) has taken over first place. The percentage changes for all sectors are set out in Graph 1.

Construction has eased back to +3.1% year-over-year jobs growth after achieving a peak of +6.1% (December 2014) in the years since the Great Recession.

Also noteworthy is how earnings growth stumbled in February (see Graph 2). For production and non-supervisory personnel, year-over-year compensation rates for ‘all jobs’ were +3.5% hourly and +2.9% weekly. For construction within ‘all jobs’, the pay check advances were +3.3% hourly and a nearly stalled +1.2% weekly.

The Bank of Canada has been cautiously following the Federal Reserve’s lead in upping interest rates. But not only will the Bank of Canada likely hold fast on further yield hikes, there is an increasing possibility that it may shift into reverse.

Statistics Canada’s February jobs numbers were quite buoyant, however, at +56,000. (Much of Canada’s GDP trouble centers in foreign trade, where mounting deficits are dragging down National Income’s bottom line.)

Among the provinces, B.C. has the lowest unemployment rate, 4.5%; tied for second are Quebec and Manitoba (5.3%). The national jobless rate in February was 5.8%, the same as in January.