China Slipping in Competition for Preeminence Among U.S. Trading Partners

Three Countries in Front Rank of Trade with U.S.

Three countries compete for preeminence in foreign trade with the United States. Not surprisingly, they are the two neighbors on either side of the U.S., Canada and Mexico, and the nation with the second largest (behind America) gross domestic product (GDP) in the world, China. 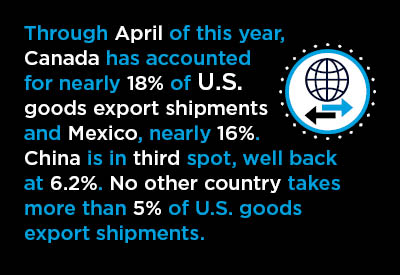 The NAFTA agreement has been rewritten to become the USMCA accord and, with a few hiccups − i.e., threatened, but not enacted, tariffs on Mexico to encourage crackdowns on migrations to the U.S. border − sales transactions between the three North American compatriots is being normalized. Original and retaliatory tariffs on steel and aluminum will soon disappear.

Tariffs on a wide range of products from China, however, remain in place, and may be widened and lifted further if an agreement on market access and intellectual property protections is not reached by the time of the G-20 meeting at the end of June.

Among U.S. Export Customers, China Well Back of Canada and Mexico

How important is China to U.S. foreign trade?

Table 1 highlights that both Canada and Mexico are far bigger customers for U.S. exporters than Chinese clients. Through April of this year, Canada has accounted for nearly 18% of U.S. goods export shipments and Mexico, nearly 16%. China is in third spot, well back at 6.2%.

Also, it’s worth noting from Table 1 that no other country besides Canada, Mexico or China takes more than 5% of U.S. goods export shipments.

Finally, Canada and Mexico combined, through the initial four months of 2019, have purchased an impressive one-third (33.8%) of total U.S. products shipped outside the country.

China is Number One as Source of U.S. Goods Imports

On the import side of the foreign trade ledger, however, there is an elevation of China’s status.

Reading from the far right column of Table 2, the proportion of total U.S. imports originating in China has been 17.4% through April of this year. That’s ahead of the import shares coming from second-place Mexico (14.5%) and third-place Canada (12.5%).

After Canada, there’s a big step down to the next significant source of U.S. imports, Japan (6.1%). Beyond China, Mexico, Canada and Japan (and the latter, just barely), no other country supplies the U.S. with more than 6.0% of total goods imports.

It’s not the trading-partner shares of exports or imports that are causing problems for the U.S. economy on the foreign trade front. Rather, the headache comes from the negative gap between total exports and total imports.

China is, by far, the biggest source of that minus spread.

The U.S. is often close to trade balance with Canada, is down modestly with Mexico (which usually yields around 10% of the U.S. deficit) but is in a deep hole with China.

From Graph 2, China’s share of the U.S. goods trade deficit in April 2019 was more than one-third of the total (36.4%), far surpassing any other country.

Those in favor of the tariffs, however, will be quick to point out that China’s share of the U.S. goods trade deficit has been reduced dramatically from the 45% to 50% range that was common earlier.

There’s more to the story, though. China hasn’t stood still on its side of the trade war. Beijing has introduced measures to deny U.S. access to its marketplace. This has been especially painful for American hog and soybean farmers.

The -12.7% drop in imports from China should be viewed in the context of a -19.9% decline in U.S. exports to the Middle Kingdom.

The last data point is for April 2019.
Based on seasonally adjusted monthly figures, projected at an annual rate.

Canada’s trade deficit in April improved to only -$12 billion, annualized. Four months earlier, in December 2018, it had ballooned to an all-time extreme of -$60 billion.

Still, Canada has a long way to go to return to the days of substantial surpluses that were prevalent before the 2007-2008 recession. Canada used to be able to count on a net export advantage of between +$40 billion CAD and +$60 billion CAD, annualized, each month.

Graph 3 shows the extraordinary inversion, − or expressed more colloquially as the ‘flipping over’, − of Canada’s merchandise (goods) trade performance.

When ‘net exports’ are positive, they add to national output (GDP); when negative, they are a takeaway from GDP’s bottom line.

Graph 4 showcases Canada’s key export products and their primary provinces of origin. The three big winners so far this year have been energy product exports from Newfoundland and Labrador, +9.7%; consumer goods exports from Ontario, +11.6%; and metals and minerals from Saskatchewan, +25.1%.

Saskatchewan’s strength in metals and minerals derives mainly from potash and uranium, with potential for extraction of diamonds sprinkled in as well. Mining in other provinces is mainly concentrated in base and precious metals, especially copper, nickel, iron and gold.

The last data point is for April 2019.
Based on seasonally adjusted monthly figures, projected at an annual rate.

In January of this year, Canada’s share of total U.S. oil imports finally managed a milestone it’s been on the verge of achieving for some time. It crossed above 50%.

Graph 5 shows the proportion of U.S. oil imports coming from Canada in 2017, 2018 and to date in 2019. The percentages are year-to-date figures for each month. Therefore, it’s easy to see the progression as the year unfolds.

Canada’s share stayed steady, just above 40%, throughout 2017. It jumped to about 48% at the beginning of 2018, then eased back a little as the ensuing months proceeded along. In 2019, it has done nothing but slowly climb, claiming a share that’s more than half in the process.

Graph 6 offers an even more stunning rendition of Canadian oil producers’ achievement. In 2000, OPEC nations accounted for 50% of U.S. oil imports. Only 15% was being sourced from Canadian output.

Canada’s foreign trade position has long rested on success in the oil patch of Alberta, with Newfoundland and Saskatchewan in the game as well. In geopolitics, the escalation in tension between the U.S. and Iran has been driving upwards the global price of oil.

Also, the prospects for delivery system construction have become brighter. President Trump has approved, for a second time, TransCanada’s Keystone XL pipeline expansion. And the Trudeau Liberal government in Ottawa has once again given a go-ahead to Kinder Morgan’s Trans Mountain pipeline capacity addition to the West Coast.

Such approvals, however, don’t equate to anything more than the announcer at Indy saying, “Gentlemen, start your engines!” It doesn’t mean the projects will soon be speeding around the oval track. Progress will surely continue to be delayed by court and ‘sit-in’ challenges.