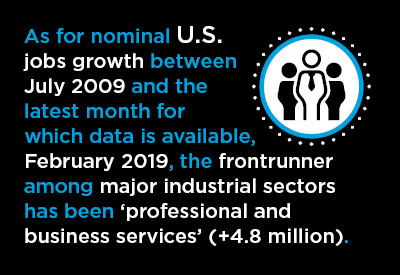 Color-Coded Chart of U.S. Jobs Growth Since the Recession

Two-tier Table 1 accompanying this article ranks employment changes in the U.S. economy, first by major industry sector, then by selected subsectors, over the period stretching from the end of the recession (July 2009) to the present.

The percentage increase in total employment during the past nine and a half years has been +15.2%. In the lower portion of the table, a thick horizontal line has been drawn to separate subsectors with jobs growth greater than +15.2% from those that have underperformed.

All major industry sectors, − i.e., the same as those highlighted in the monthly Employment Situation Report from the Bureau of Labor Statistics (BLS), − are included in the table. But only a limited number (59) of subsectors are shown. While 59 may seem like a big number, it’s only a fraction of the total number of workplace categories that are available in the jobs market.

Most of the jobs categories that have been left out, however, have relatively unexciting results to report. Their jobs growth has been lackluster or closely aligned with the national gain. (Two examples are ‘household appliance manufacturing,’ where the jobs change has been +6.7%, and ‘natural gas distribution,’ +2.8%.)

Color-coding has been adopted for the industry and subsectors designations. Yellow is for the kind of private sector work that will mainly take place in offices; orange is for manufacturing; gray for institutional; blue is for jobs serving consumers in wholesale, retail, leisure, and amusement pursuits; and green is for resource extraction and nonmanufacturing industrial work.

In many instances, the color coding is a judgement call and overlapping is unavoidable – e.g., jobs with ‘couriers and messengers services’ could just as reasonably be categorized to ‘wholesale/retail’ or ‘private office-related’ as to ‘nonmanufacturing industrial’.

Nevertheless, it’s important to take the material and establish order as there are implications for the kinds of construction that will be required based on where the hottest jobs growth is happening. Pickups in ‘professional and business services’ jobs will mean a need for office space. Gains in ‘institutional’ work require educational, medical, and transit capital spending.

The dominant color in the table is yellow, representing ‘private office-related’ employment.

There have been many office-related type-of-job categories where the June 2009 to February 2019 percentage increases in employment have been outsized. Especially striking has been the hike in staffing undertaken by ‘companies offering temporary help services,’ +73.3%. This reflects a sea change in the labor market. Employers have become more willing than in the past to fill job openings with part-time personnel.

The prevalence of old style storefront travel agencies has been drastically reduced, but in shifting sales venues to the internet, the ‘travel arrangement and reservation services’ subsector has achieved a respectable +14.5% gain in employment over nearly ten years.

Severely underperforming in private office-related employment have been ‘legal services,’ only +1.9%, and ‘commercial banking,’ stalled at +0.1%.

On the upside, there have been two manufacturing subsectors with sizable percentage increases in employment, ‘motor vehicles and parts,’ +54.1%, and ‘beverages,’ +56.8%.

Institutional Jobs (gray shading):
Total government employment since the end of the recession has stayed flat (-0.2%), limiting the scope for public-sector office space construction. Within ‘institutional’ work, however, there have been notable climbs in employment in the health care subsector, arising from a population profile that is aging. (Baby boomers, born between the mid-1940s and mid-1960s, are increasingly entering their ‘golden years.’)

Since July 2009, the number of jobs in ‘home health care services’ has risen +46.8%. And in ‘community care facilities for the elderly,’ staffing has climbed by +32.7%. Only hospitals have disappointed with their lukewarm employment increase of +11.7%.

In the field of education, the hiring increase by ‘elementary and secondary schools,’ at +28.4%, has been almost twice as strong as by ‘colleges and universities,’ +16.1%. It’s interesting to note, though, that the number of jobs in America at the level of higher education (i.e., 1.8 million with ‘colleges and universities’ in February 2019) is greater than at the lower grades (i.e., 1.1 million with ‘elementary and secondary schools’).

Driven by the systemic shift in retail away from ‘bricks and mortar’ locations to web-based platforms, there has been an accompanying surge in the establishment of facilities to fulfill orders. The consequence, since the recession, has been a +85.3% increase in employment in the ‘warehousing and storage’ segment of the economy, the heftiest jobs increase among all subsectors.

Speaking of web-based selling, the increase in jobs generated by ‘electronic shopping and electronic auctions’ has been a stunningly positive +62.0%.

Some other ‘wholesale and retail’ subsectors with commendable jobs increases since July 2009 have been: ‘caterers and mobile food services,’ +38.0%; ‘general merchandise stores, including warehouse clubs and supercenters,’ +29.7%; ‘motor vehicle and parts dealers,’ +25.3%; and ‘pet and pet supplies stores,’ +24.6%.

There has been a boom in hotel and motel construction over the last several years, but employment in the ‘accommodation’ subsector has been a relatively tame +17.1% since July 2009.

On a brighter note, there have been some significant ‘nonmanufacturing industrial’ subsector jobs gains in the fields of: ‘machinery and equipment rental,’ +54.8%; ‘couriers and messenger services,’ +37.1%; and ‘waste management and remediation services&rsquo,; +28.8%.

‘Truck transportation’ employment, at +20.8%, has beaten (but not by a huge margin) the nationwide all-jobs increase, from the end of the recession to the present, of +15.2%.

As for nominal jobs growth between July 2009 and the latest month for which data is available, February 2019, the frontrunner among major industrial sectors has been ‘professional and business services’ (+4.8 million). Next in line have been: ‘health care and social assistance’ (+3.7 million); ‘leisure and hospitality’ (+3.6 million); ‘construction’ (+1.5 million); and ‘retail trade’ and ‘transportation and warehousing’ (each +1.3 million).

The nominal payroll increase for manufacturers has been +1.17 million jobs, with durables producers contributing +920,000 and nondurables firms, +250,000.

Two sectors have cut staffing. On the downside, ‘utilities’ have trimmed their employee count to a minor degree, -3,000 jobs, but ‘government’ has been more aggressive, -38,000 jobs.

Federal, state, and local government combined, however, continues to be the largest source of jobs in the economy. With a 15.6% share, it ranks ahead of second-place ‘professional and business services’ (14.8%) and third-place ‘health care and social assistance’ (14.0%)