A Composite Ranking of Job Markets in 50 U.S. and 33 Canadian Cities

Trying to get a handle on the relative performances of city labor markets is complicated by the fact that strength and weakness in the two most important indicators – jobs growth and the unemployment rate – are the reverse of each other. 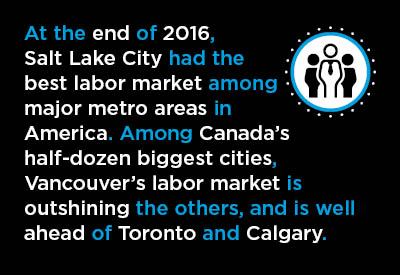 What’s most desirable is a high rather than a low employment growth figure. But with respect to a jobless number, the wish is for a low rather than a high number.

There is a relatively simple means to circumvent this problem. First, rank all the cities under consideration according to their year-over-year jobs growth, fastest to slowest. Then compile a second listing according to unemployment rates, smallest to biggest.

The third critical stage is to calculate the average ranking for each city from steps one and two and to use that new number to place them in order by their ‘composite’ ranking.

The results for the 50 largest (by population) metropolitan statistical areas (MSAs) in the U.S. are shown in Table 1. Table 2 is similar for Canada, showcasing the nation’s 33 census metropolitan areas (CMAs).

The four background tables (i.e., two for the U.S. and two for Canada) to reach the composite rankings also appear below.

In this particular instance of city-level labor information, the U.S. data set is one month behind its Canadian counterpart.

Table 1 says that, at the end of last year, Salt Lake City had the best labor market among major metro areas in America. In the background tables, it ranked No. 2 for year-over-year employment change (+3.4%) and No. 3 for lowest unemployment rate (2.7%).

San Jose, with particular strength in employment growth (i.e., tied with Salt Lake City at +3.4%), and Denver, with a minimal unemployment rate (only 2.6%), are next in line for accolades in the composite ranking.

The shaded cities in Table 1 highlight the ten biggest population centers in America. Among the ten, Dallas-Fort Worth, Boston and Washington are in a league of their own near the summit of the composite ranking. In the background data, Boston’s unemployment rate, at only 2.5%, is best overall.

Atlanta and Miami are situated at the mid-point of the composite ranking, New York and Los Angeles are about two-thirds of the way down, and Chicago and Houston are deep in the trenches, near or at the bottom.

Among Canada’s half-dozen biggest cities, Vancouver’s labor market is outshining the others, giving it a seventh-place slot in the composite ranking. (Some smaller centers are doing better, often on account of their ties to a booming auto parts sector.)

Ottawa-Gatineau and Montreal sit below Vancouver, but well ahead of Toronto (24th) and Calgary (26th). Montreal, among its peers, has achieved the most commendable rate of payroll increase over the past 12 months, +4.0%.

At the bottom of Table 2 is Edmonton, where the labor market is worse off than in nearby Calgary. An under-siege energy sector has been making life difficult for many people in Alberta.

Calgary may have the poorest unemployment rate in the country, at 9.8%, which is even more dismal than Edmonton’s 8.1%, but it is managing jobs creation, +2.6% year over year. Firms in Edmonton, however, have been mainly writing ‘pink slips,’ with employment slipping -3.8% year over year.