Groundbreakings on several mega projects late last year lifted ConstructConnect’s 2017 total U.S. starts to +11.1% versus 2016, more than the +7.9% set out in the previous quarterly forecast. 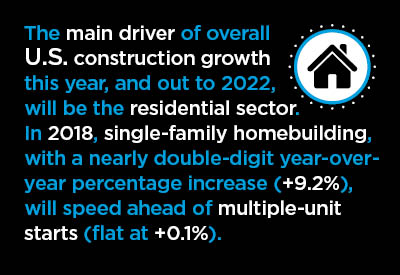 The out-front timing of those mega project starts also caused trimming of ConstructConnect’s expectations for 2018, which is now being projected at +3.0% year over year versus the prior projection of +4.8%.

From 2019 on, the forecast for total starts remains essentially the same as previously expected, an average annual climb of close to +5.0%.

Three factors acting to support new construction this year will be: (1) an acceleration in U.S. GDP growth to near +3.0%; (2) a new tax regime that will provide individuals and corporations with more spending power; and (3) ongoing improvements in global trade.

Performing as a restraint will be a particularly tight labor market that is generating concerns over a flare-up of inflation, through more strident wage demands. A key consequence will be several interest rate hikes introduced by the Federal Reserve.

The main driver of overall construction growth this year, and out to 2022, will be the residential sector. In 2018, single-family homebuilding, with a nearly double-digit year-over-year percentage increase (+9.2%), will speed ahead of multiple-unit starts (flat at +0.1%).

With the current boost in jobs and earnings, the demand for rental accommodation is on the wane as many millennials, finding their first well-paying employment and forming families, are casting their eyes on more traditional home ownership.

Total residential starts will achieve an average annual advance of +7.0% out to 2022.

Non-residential building starts will be a disappointment in 2018, falling by -1.6%. But the decline will be partly in reaction to some major project initiatives that occurred last year.

Stadium starts (e.g., a new NFL stadium in Las Vegas) were especially strong in 2017, and it won’t be possible to repeat the same degree of success in 2018.

Due to the extraordinary shift to on-line selling platforms, retail ‘bricks and mortar’ construction has entered an extended period of lukewarm performance at best. As a partial counterweight, warehouse building activity was +26.2% in 2017 and is projected to be +5.8% in 2018.

The industrial or manufacturing type-of-structure category was another segment of construction that was significantly bumped up by ultra-large project work in 2017 (e.g., petrochemical plants in Texas and Pennsylvania).

The -27.5% change for manufacturing in 2018 will be a pendulum swing back to normalcy from the +69.6% surge in 2017. From 2019 on, U.S. manufacturing will benefit from: (1) the new more favorable tax regime; (2) the U.S. propensity to lead in technological advances; (3) an abundance of North American-extracted energy supplies; and (4) the climbing path of national output, accompanied by a synchronous world expansion.

As forecast by ConstructConnect, starts on hospitals, nursing homes and educational facilities in 2018 will manage forward progress in 2018, although the advances will be relatively modest, +4.1%, +6.3% and +2.6% respectively.

Heavy engineering/civil starts rebounded mightily in 2017 (+25.6%) after experiencing significant weakness for a couple of years after the big decline in oil prices in 2014. Over the three years from 2018 through 2020, engineering starts are now being forecast to rise by slightly more than +6.0% per year.

The outlook for engineering work could turn out to be even better than now appears to be the case, but it will require Congress to bust free from gridlock and pass a meaningful version of a visionary infrastructure spending package.

Nobody doubts the urgent need for upgrades to the nation’s public works inventory. Recognizing that states and municipalities are stepping up in this area, ConstructConnect is forecasting increases of +6.9% for road starts and +9.0% for bridge starts in 2018.

Also, airports (e.g., at LaGuardia in New York) have been a source of much U.S. construction activity of late. After an outstanding advance of +87.1% in the dollar-volume of airport starts in 2017, however, ConstructConnect is expecting a pull-back of -10.5% in 2018.

North of the border, the huge natural resource component of construction has been awaiting an upturn in commodity prices. Finally, a Canadian turnaround appears imminent and ConstructConnect is forecasting an average annual increase in total starts of more than +8.0% out to 2020.

The full 22-page Construction Starts Forecast, Spring 2018 issue, can be read in the Forecast module of ConstructConnect's Insight.