The total number of jobs in the U.S. rose by +312,000 in December, according to the latest Employment Situation report from the Bureau of Labor Statistics (BLS). 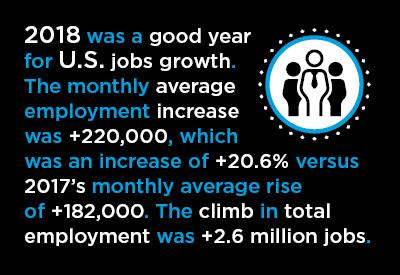 Optimism over hiring prospects caused the participation rate in December to climb to 63.1% from 62.9% the month previously (i.e., more out-of-work individuals decided to rejoin the labor force). The side effect was that the unemployment rate moved up to 3.9% from 3.7% in November.

The large month-to-month gain in jobs in December understates the overall improvement, since there was also a substantial positive revision to prior data. A month ago, the BLS reported a total jobs level of 149.893 million. It is now saying that November’s figure was really 149.951 million, an increase of +58,000.

The construction sector also delivered some bountiful pay increases in the latest month. Average hourly and average weekly earnings for all ‘hard hat’ workers were both +3.9% year over year. The comparable increases across the whole economy, both hourly and weekly, were +3.2%.

The pumped-up jobs number for ‘retail trade’ (+24,000) is noteworthy because of the time of year. Yes, December is always expected to be an outstanding month for shopping, due to purchases of gifts for the holiday season. But the +24,000 figure is after seasonal adjustment, which is supposed to take account of anomalies that happen regularly from year to year. The inference is that the latest Xmas season was a more-than-usually-busy time for shopkeepers.

Statistics Canada’s Labour Force Survey report for December speaks of total jobs north of the border creeping forward by only +9,000.

There are three graphs accompanying this article – for ‘total’, ‘manufacturing’ and ‘construction’ − showing how Canadian employment has fared relative to U.S. employment since January 2010.

For ease of comparison, all the series have been indexed with January 2010 as the base or starting point. Jobs levels in following months are then expressed as a ratio of the base level or starting point. (i.e., if the jobs level rises by 25%, the index value will be 125.0).

Canada hit a weak spot in total jobs creation from 2013 through 2015 but has since been mostly tracking the U.S. path higher. But in construction, and to an even greater extent manufacturing, Canada has not been keeping up on the jobs-creation front.

Canada’s unemployment rate in December stayed the same as in November, at 5.6%.