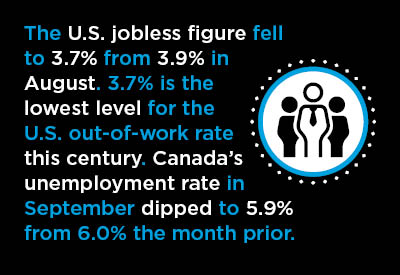 In both the U.S. and Canada in September, there was shrinkage in the unemployment rate.

The U.S. jobless figure fell to 3.7% from 3.9% in August, according to the latest Employment Situation report from the Bureau of Labor Statistics (BLS). 3.7% is the lowest level for the U.S. out-of-work rate this century.

Canada’s unemployment rate in September dipped to 5.9% from 6.0% the month prior. While 5.9% is quite tight for north of the border, it has been beaten on a number of occasions over the past decade or so, although not by much. Since the recession, the monthly Canadian unemployment rate has fallen to 5.8% on six occasions, most recently in July of this year.

The total number of U.S. jobs in September rose by +134,000. Since that’s the weakest month-to-month gain in a year, some analysts will conclude that steam is venting from the super-heated jobs market. But there’s a well-hidden number to keep in mind.

The bottom line is that the extraordinary strength in the American jobs market remains in full force.

The U.S. month-to-month change in total employment this year has averaged +208,000 jobs. The comparable figure for the first nine months of last year was +170,000. This year’s monthly average is ahead by nearly one-quarter (+22.9%) compared with January-September 2017.

Canada’s increase in total employment in September, according to Statistics Canada’s Labour Force Survey, was a healthy +63,000 jobs.

It’s disconcerting, however, that the Canadian numbers have been bouncing around so much. In the past three months, the Canadian jobs total was +54,000 in July; -51,000 in August; and now +63,000 in September.

Analysts, of late, have been expressing some doubts about the accuracy of Statcan’s jobs measurements.

There’s been one remarkable development in U.S. public sector jobs. It was mentioned earlier that August’s total jobs number was revised higher by +87,000. Most of that revision (+66,000) came in the number of jobs credited to government.

Compensation stayed in check in the latest month. For all jobs in the U.S. economy, average hourly earnings were +2.8% year over year and average weekly earnings, +3.4%. The comparable percentage changes for construction workers (i.e., as a subset) were +3.1% both hourly and weekly.

Leaving out supervisory personnel, the all-jobs increases were +2.7% hourly and +3.1% weekly. Construction workers fared a bit better at +2.8% hourly and +3.6% weekly.

The latest Canadian figures on average hourly and average weekly earnings for all employees are +2.4% and +2.2% respectively.

As for the average weekly wages of full-time versus part-time workers in Canada, the latter are being rewarded a little more richly than the former, +2.6% year over year versus +2.0% respectively.

Regionally in Canada in September, British Columbia continued to be the front-runner among the provinces for its favorable unemployment rate, only 4.2%. The next best provinces were: Quebec (5.3%); Manitoba (5.8%); and Ontario (5.9%).

Other good news on the jobs front concerns Canada joining the U.S. and Mexico in a revamped NAFTA trade agreement, to be known henceforth as USMCA. The ‘partial’ removal of uncertainty (i.e., outstanding tariff issues related to steel and aluminum remain) concerning supply-chain arrangements between the three countries will provide a strong boost to business confidence.