Donald Trump, as President-elect of the United States, has been assembling a governing team with a great deal of business and military experience. His clear intent is to carry through with significant change on a multitude of fronts, including taxes, regulations and social programs. 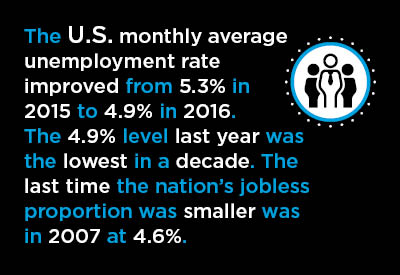 The initial reaction among stock markets investors has been positive, fueling a ‘Trump rally.’ But the potential for missteps in domestic policy directions and in trade and currency/capital-flow dealings with other nations, in Europe, Asia, Latin America and elsewhere, remains high. Few theater-goers will be leaving their seats early with such a compelling drama ‘on Broadway.’

In this context, there are the following economic ‘nuggets’ to be gleaned from the latest government agency and private sector data releases. The soil is rich and the crop abundant.

(1) The first initial jobless claims report in 2017 stayed the course in offering up an extremely favorable number. The level for the week ending January 7 was only 247,000. The 300,000 benchmark, below which the labor market becomes tighter and the availability of new jobs more prevalent, has been beaten for 97 weeks in a row. If the success under 300,000 is maintained, the two-year mark will be reached on February 25. The lowest the number has reached over the past extended period of time was 233,000 for the week ending November 11 of last year.

(3) Against the backdrop of a +1.5% December year-over-year improvement in U.S. total jobs, it’s interesting (and fun) to consider the subsectors where hiring has leaped out further. Staffing among firms offering primarily ‘electronic shopping and electronic auctions’ was +10.9% year over year in 2016’s last month. The number of workers engaged in ‘warehousing and storage’ was +4.6%. ‘Home health care’ employment was +4.0%. ‘Elementary and secondary school’ jobs were +3.9%. Payrolls at ‘telephone call center and telemarketing’ companies were +3.3%.

(4) In Canada, some of the subsectors with the largest year-over-year employment increases in December were: ‘computer systems design and related services’, +10.2%; ‘ship and boat building’ (thanks to federal government spending on upgrading the country’s coast guard, icebreaker and frigate fleets), +9.2%; ‘call centers and telemarketing’, +8.4%; ‘warehousing and storage’, +7.8%; ‘employment services’ firms, +6.3%; and ‘community care facilities for the elderly’, +7.1%. To provide context, December total jobs in Canada were +1.2% year over year.

(7) The Conference Board’s Consumer Confidence Index (CFI) for November 2016, based on survey responses obtained in large measure before the Presidential election, was a buoyant 109.4. The base level for the CFI is 1985 equal to 100.0, on the premise that sentiment in 1985 was neither jump up and down optimistic nor sink into a deep funk pessimistic. December’s CFI shot up even further, to 113.7. According to the Conference Board, the CFI is at a 13-year high.

(8) December’s Purchasing Managers’ Index (PMI) of the Institute for Supply Management (ISM), at 54.7%, climbed to its highest monthly level in 2016. A PMI reading above 50.0% means both the overall economy, as measured by ‘real’ (i.e., inflation-adjusted) gross domestic product (GDP), and the manufacturing sector are growing. A PMI below 50.0% but above 43.2% is consistent with economy-wide growth even as manufacturing is contracting. A PMI of 43.2% or less is sad news spread far and wide. Not to worry. Based on the history of the PMI-to-‘real’-GDP relationship, December’s 54.7% corresponds with annualized total output change of +3.6%.

(9) According to the Census Bureau’s latest calculations, which are “adjusted for seasonal variation, holiday and trading day differences, but not price changes,” the U.S. had strong retail sales in the key gift-giving month of December 2016. Shopkeeper cash register receipts were +0.6% month to month and +4.1% year over year. The three-month average of year-over-year gains in retail sales, also at +4.1%, was the fastest in 2016. The comparable percentage change twelve months earlier in December 2015 had been only half as speedy, at +2.0%.

(10) The dollar volume of sales at U.S. gasoline stations is finally rising again. In December 2016, they were +6.3% year over year. During the two years from mid-2014 to mid-2016, they often slumped severely, in tandem with the deep trough experienced by the world price of oil. More recently, in a trend that has brought a sigh of relief to the energy sector, the global price of crude has been recovering. Total ‘auto and parts’ retail sales in the latest December were +6.8% year over year. Non-store (i.e., web-based) retail sales were a startlingly upbeat +13.6%.

(12) The lift in total Canada new home starts was somewhat surprising given the performances in the nation’s six largest population centers. Only Vancouver (+34%) and Ottawa-Gatineau (+9%) recorded more foundations being laid in 2016 than in 2015. Montreal (-5%) and Toronto (-8%) experienced mild cutbacks and Calgary (-29%) and Edmonton (-41%) suffered through severe contractions. Vancouver’s multi-family starts (+40%) were especially buoyant. Toronto, where condo construction has been so bullish for so long, had multi-family starts that were -15%.