You've heard that the U.S. economy is performing quite nicely, thank you, but you're still not totally convinced that boom times have returned. You're right to hold back on expressing boundless enthusiasm. After all, there are worries about potential fallouts from an escalating foreign trade and tariff war, interest rates that are on the upswing and stock market investors who are continuing to exhibit skittish behavior. 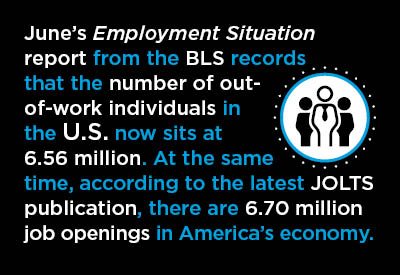 But consider the following extraordinary turn of events that has taken place in the labor market. June's Employment Situation report from the Bureau of Labor Statistics (BLS) records that the number of out-of-work individuals in the nation now sits at 6.56 million. At the same time, according to the latest Job Openings and Labor Turnover (JOLTS) publication, also from the BLS, there are 6.70 million job openings in America’s economy.

In other words, and this is where the trumpets should sound, there are presently more job openings with employers in the U.S. than there are people seeking to be hired. Except for the fact that there are mismatches between vacant positions and job skills, and some where-one-lives versus where-the-work-is-located hurdles to be overcome, there is an implication that in at least some sense, the U.S. has moved beyond full employment.

These may not yet be the best of all economic times, but they are polishing up to a pretty fine luster nonetheless.

Against the foregoing backdrop, there are the following additional nuggets to be gleaned from the latest public sector and private agency data releases.

(1) While the total number of jobs in the U.S. economy rose +1.6% year over year in May, more interesting information is to be found in the digging-deeper details. For example, hiring in construction has increased much faster over the past 12 months, +4.1%, with residential payrolls expanding rapidly, +6.6%, followed by specialty trade contractors, +4.3% and non-residential building and heavy and civil engineering almost in a tie, +2.3% and +2.4% respectively.

(2) Where else have the swiftest increases in U.S. jobs growth occurred? There have been outsized year-over-year percentage increases in the following pockets of business and social activity: machinery and equipment rental, +14.4%; nanotechnology research and development, +10.4%; couriers and messenger services, +8.8%; pet and pet supply stores, +6.0%; electronic shopping and electronic auctions, +4.6% (although a year ago, jobs in this category were +9.6% year over year); warehousing and storage, +4.3%; waste management, also +4.3%; and biotechnology (other than nanotechnology) research and development, +3.7%.

(3) What’s been the recent record of employment growth in the resource sector? The number of workers engaged in logging is -3.4% year over year (y/y). Other than in the forestry sector, though, there has been forward progress. The tally of coal miners is +2.3% y/y. The roster of workers making cement and concrete products (which is technically classified as manufacturing) is +1.0%. And in oil and gas extraction, staffing has swung from shrinking to swelling, at +3.9%.

(4) Since the 2008-09 recession, the U.S. monthly annualized foreign trade deficit in goods and services has stabilized in the range of -$400 to -$600 billion. (Earlier, it tested -$800 billion.) In the latest month, the figure was -$517 billion. In strictly ‘goods’ foreign trade in May, the U.S. experienced a shortfall of -$790 billion that was about one-third counterbalanced by a ‘services’ surplus of +$273 billion.

(7) Despite all the talk of tariffs and tight labor markets, one continues to hear that inflation is firmly under control in the U.S. The make-up of such an assertion is gradually becoming more parts ‘wishful thinking’ than evidence-based reality. In May, the All-items Consumer Price Index (CPI) was +2.9% year over year, its highest footprint since February 2012, more than six years ago. May 2018’s ‘core’ inflation rate, which omits volatile food and energy commodities, was +2.3%. Rarely has the core rate equaled or exceeded +2.3% over the past 17-plus years, dating back to the turn of the century. And the measure that has long been studied intently by the Federal Reserve, the ‘Personal Consumption Expenditures (PCE) price index, excluding food and energy’, was +2.0% in the latest month. Again, one needs to search far back, to March 2012, to find a comparably lofty reading for the PCE.

(8) North of the border, the labor market statistics in May were solid enough, at +32,000 net new jobs, that the Bank of Canada has recently initiated another interest rate increase. The policy-setting ‘overnight rate’ has been lifted to 1.50%. (The target ‘federal funds rate’ in the U.S. currently lies between 1.75% and 2.00%). By the way, +28,000 of the total +32,000 month-to-month jobs advance in Canada in May originated in the construction sector. Canada’s unemployment rate is 6.0%, but that’s according to a calculation methodology (i.e., with respect to who is really trying hard to find work) that is not as stringent as in the U.S.

(10) One reporting month ago, it appeared a correction might be underway in Canada’s housing starts, after they dipped to 194,000 units seasonally adjusted and annualized (SAAR) in May. A level above 200,000 has come to be accepted as the ‘norm’. But there have been various government-directed policy measures to cool residential property demand, and thereby throw some water on super-heating prices. May’s brief pause, however, has been followed by a dramatic recovery in June’s figure. The latest number of housing starts in Canada was 248,000 units SAAR, better than in any other month to date in 2018 and about on a par with the two best months of 2017.

(11) Among Canada’s 30-plus census metropolitan areas (CMAs), there is an approximately even split between those that have recorded an H1 2018 over H1 2017 housing start (in units) percentage increase versus decrease. For the country’s six most populous urban areas, the ordering of total new home starts gains or losses have been: Montreal, +23%; Toronto, +10%; Calgary, +8%; Vancouver, +2%; Ottawa-Gatineau, -1%; and Edmonton, -15%. In multi-unit residential construction, the two leaders among the Big 6 have been Montreal, +26% and Toronto, +25% − both up by about a quarter.