12 Mid-March Economic Nuggets – With a Focus on Foreign Trade

During the almost five years from early 2004 through most of 2008, the U.S. ran a monthly goods and services foreign trade deficit that ballooned into a range of -$600 billion to -$800 billion USD annualized. 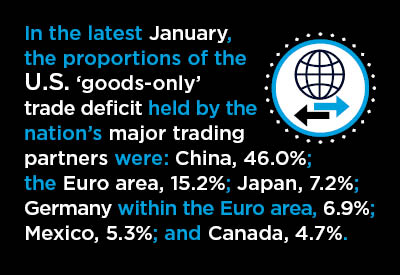 One major source of the large shortfall was the need for massive imports of oil and natural gas to fuel America’s energy demands that were in excess of its domestically-generated supply. Another was the rapid growth in gross domestic product (GDP) led by consumers who increasingly sought the purchase of inexpensive goods from Asia.

Then the recession steamrollered the economy and for a brief number of months in 2009, the U.S. foreign trade deficit contracted under -$400 billion. Late in 2009, however, it worsened again and stayed stuck in a range of -$400 billion to -$600 billion until the latest three months, when it has moved back beyond -$600 billion.

Today’s large deficit is different from the previous outsized gap in one major way, however. The U.S., through the widespread adoption of hydraulic fracturing, has become nearly self-reliant in oil and gas. In fact, it is seizing on some newly-created energy export opportunities, mainly in the product area of liquefied natural gas (LNG).

Stirring up considerable controversy, the Trump administration in Washington has recently chosen to introduce sizable tariffs on some imported goods such as solar panels, softwood lumber, steel and aluminum. The two major reasons cited are to protect jobs at home and to preserve industries (i.e., steel and aluminum) that are essential to national security.

With the foregoing as background, there are the following additional observations to bring to readers’ attention in this month’s ‘Nuggets’ report.

(1) In the latest January, the proportions of the U.S. ‘goods-only’ trade deficit held by the nation’s major trading partners were: China, 46.0%; the Euro area, 15.2%; Japan, 7.2%; Germany within the Euro area, 6.9%; Mexico, 5.3%; Canada, 4.7%; and OPEC, 3.7%. With respect to OPEC nations, the U.S. has moved into balance with Saudi Arabia and Venezuela. The reference to the ‘goods’ trade deficit has special meaning in that the U.S. always runs a sizable ‘services’ surplus. In terms of scale, the positive value of America’s ‘services-trade’ counterbalances about one-quarter of the negative value of its ‘goods-trade’.

(2) One shouldn’t leap to too many conclusions based on the data from only one month. And especially not if one is studying energy markets and that month is January, since January usually encompasses some of coldest stretches of the year and may feature unique circumstances. Nevertheless, U.S. oil import numbers during the latest January are quite interesting. Canada’s share of total U.S. oil imports expressed in barrels rose to nearly half (47.6%) from their standard level of around 40%. Iraq replaced Saudi Arabia as the second major supplier of U.S. oil imports, with 8.5%. Saudi Arabia (8.2%) dropped to third, with Mexico (7.3%) in fourth and Colombia (6.2%) in fifth. Venezuela fell from among the Top 5 to sit in seventh spot. Nigeria (4.5%) moved up to sixth.

(4) Canada’s monthly merchandise (i.e., goods-only) trade balance was consistently higher than +$40 billion CAD (annualized) before the Great Recession. Since mid-2008, however, it has resided almost entirely in negative territory, touching on -$40 billion several times in the past two years. Again, as discussed in point (6), there’s an explanation to be found in the energy sector.

(5) Prior to 2009, and before U.S. natural gas production from shale rock ramped up dramatically – which also served to lower the price per million cubic feet − Canada exported vast volumes south of the border. Over the past nine years, however, Canadian exports in dollar terms have retreated to only about one-third of their previous level. At the same time, imports of easily-available natural gas from northern and eastern U.S. states have replaced product from Alberta in central Canada.

(6) Leaving aside foreign trade for the moment, there was a milestone achieved in another U.S. data release recently that warrants mention. For the week ending February 24, 2018, U.S. initial jobless claims were less than 300,000 for the 156th week in a row. That’s three straight years under the level generally considered indicative of a healthy labor market. Not only was February 24th’s figure less than 300,000, at 210,000 it was the lowest in the whole long string of weekly successes dating back to the late winter of 2015. No wonder U.S. month-to-jobs creation in January was so upbeat, +313,000, and the unemployment rate stayed so tight, 4.1%.

(7) For those individuals who are still struggling to regain employment, often in traditional industrial sectors, it’s easy to understand why they would welcome the announcement of tariffs. Nevertheless, many economists are quick to point out the obvious difficulties that might arise from unknowable degrees of retaliation by foreign governments and cost increases at home which might inspire a quickening pace of interest rate hikes. But it’s with respect to the nuanced problems posed by tariffs where economists fail most severely to convey their message.

(8) In five or ten years, if the American steel and aluminum industries (as examples) manage to restore some of their former glory, they will owe a measure of their success to a tariff wall. Such barriers impose impediments to modernization. While U.S. firms will be prioritizing the saving of traditional jobs, competitor firms in other countries will have free rein to pursue robotics and other forms of automation. Economic history has shown that it’s the lowest cost producers who are the long-term victors in the arena of world trade.

(10) Twice annually, the Z/Yen Group think-tank based in the U.K. calculates a Global Financial Centres Index (GFCI) based on a survey and a set of criteria that includes business environment, financial sector development, infrastructure, human capital and reputation. The Top 10 placements in the GFCI’s latest ranking of most powerful financial hubs around the world are: Beijing, number 10; Zurich, 9; Sydney, 8; Toronto, 7; Shanghai, 6; Tokyo, 5; Singapore, 4; Hong Kong, 3; New York, 2; and London, 1. London’s first place position, however, is threatened by Brexit. Other U.S. and Canadian cities in the Top 20 are: Boston, 19; Vancouver, 17; San Francisco, 16; and Montreal, 12.

(12) According to the Conference Board, U.S. consumer confidence in February rose to its most fevered pitch since November 2000. In the latest month, the index value climbed to 130.8 from 124.3 in January. The index has a base of 1985 = 100.0. In 1985, the prevailing sentiment was neither too giddy nor too hangdog. Also in February, the Purchasing Managers’ Index (PMI) of the Institute for Supply Management (ISM) improved to 60.8% from 59.1%. The ISM, having tracked the history of its PMI series relative to national output, says in its press release that if the current PMI number of 60.8% were to be maintained for 12 months, it would correspond with +5.4% ‘real’ (i.e., inflation-adjusted) GDP growth.