12 Mid-May Economic Nuggets With an Emphasis on Mega Projects

It’s been a busy four-weeks-plus on the news front since the writing of the previous mid-month Nuggets report. A surfeit of headline stories has included: a volcano erupting in Hawaii; an on-again off-again bromance between President Trump and Kim Jung Un of North Korea; the relocation of America’s embassy in Israel to Jerusalem; feverish preparations for a royal wedding ‘across the pond’; U.S. withdrawal from the deal designed to limit Iran’s nuclear weapons capability; a drip-drip of revelations concerning Washington influence-peddling dished out by Michael Avenatti, the lawyer for Stormy Daniels; and violence in the Gaza Strip. 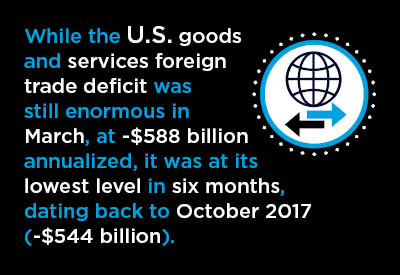 Shunted aside by other attention-grabbing matters, the economy seems to have taken a back seat for a while. But the spotlight never stays away for long and there are the following observations that arise from the latest press and data releases issued by government and private sector entities.

(1) While the U.S. goods and services foreign trade deficit was still enormous in March, at -$588 billion annualized, it was at its lowest level in six months, dating back to October 2017 (-$544 billion). During the intervening period, the shortfall soared to its greatest extent in February 2018, when it reached nearly -$700 billion. Helping to keep the deficit in check has been a -12.8% decline year to date (Jan-Mar 2018 vs Jan-Mar 2017) in the importation of barrels of oil.

(2) Among the Top 10 nations supplying the U.S. with oil to date this year, there have been two big losers: Saudi Arabia, with a -52.2% decline in shipments; and Venezuela, with a -51.8% drop. In other words, both nations have seen their deliveries contract by more than half compared with January-to-March 2017 volumes. There has been one big winner, Mexico, with a gain in shipments of crude to the U.S. (in number of barrels) amounting to +23.5%. Canada’s shipments year to date have been -2.2%, but Canada’s share of total U.S. crude imports still dominates.

(4) The subject of U.S. oil imports is a natural lead-in to a discussion of upcoming mega construction projects in America’s energy sector. Two of the biggest such proposals, at estimated costs in the many billions of dollars, are TransCanada’s Keystone XL pipeline expansion and Enbridge’s Line 3 replacement. The starting points for both routes will be Hardisty Alberta. Keystone XL will run to Steele City, Nebraska. Enbridge’s Line 3 will end in Superior, Wisconsin. Keystone XL has a history of advancing to the edge of work proceeding, then having the actual initiation snatched away. Enbridge is being rebuffed by a court in Minnesota that would like the company to build along its existing right of way rather than a new course.

(5) A groundbreaking on Kinder Morgan’s Trans Mountain oil pipeline expansion in Canada is also uncertain due to the formidable obstacles being raised by environmentalists, some aboriginal rights groups and the minority NDP government in British Columbia, which depends on the support of the province’s Green Party to stay in power. But the three pipelines mentioned so far have been designed to carry oil. A different story has been emerging in the transport of natural gas. Already this year, two mega natural gas pipelines have appeared among ConstructConnect’s monthly Top 10 project-starts lists: the Atlantic Coast Pipeline (Dominion Power) for $5.5 billion and the Mountain Valley Pipeline (NextEra Energy Resources) for $3.5 billion.

(6) Also offering considerable potential for mega projects in the energy field are liquefied natural gas (LNG) plants, with associated cooling and overseas shipment facilities, plus chemicals and plastics plants. Several such large projects in the U.S. and Canada, were given go-aheads by their owners in the second half of last year. As an interesting sidebar, the capacity utilization rates of the plastics and rubber sub-industries have risen above 80% in the U.S. and 90% in Canada – thanks largely to ongoing decent strength in automotive and parts demand. As for LNG activity, in the U.S., it’s concentrated in ports mid-way down the Atlantic coastline and on the Louisiana-Texas shoreline of the Gulf of Mexico. In Canada, hope remains that, despite the withering of some previously announced plans, a new LNG industry will emerge in northwestern B.C.

(7) Among building projects, perhaps the greatest potential for mega projects lies in airport construction. Airport work includes passenger terminals, additional gates, new runways, de-icing facilities, maintenance and storage hangars and highway access routes, plus subways and light rail transit systems between buildings or from downtown cores. Also, not to be overlooked, is the way in which today’s modern airports have become almost the last bastions of ‘bricks and mortar’ retail outlets, to capture the attention of travelers passing the time before their flights.

(9) Other super-large projects, long in the planning process, have recently been bobbing to the surface. In February of this year, there was a start on a $6.3 billion CAD subway line in Montreal, known as the REM route, where REM stands for Réseau Électrique Métropolitain. In Mount Pleasant, Wisconsin (to the west of Racine), the giant Chinese manufacturing firm, Foxconn Technology Group, is setting up a $10.0 billion USD industrial presence to serve U.S. customers. Everyone is on tenterhooks to learn where Amazon will be locating its second headquarters (HQ2) operations. And Elon Musk is anticipating the need for another enormous battery-making plant, like what now exists in Reno, to supply Tesla automobiles.

(10) Besides its HQ2 project, Amazon has been planning a major expansion of its operations at HQ1 in Seattle. But the company’s relations with city council have soured of late. City leaders have just passed legislation authorizing an employee ‘head count’ tax for enterprises generating large annual revenues. The purpose, ostensibly, is to raise money to alleviate the problems faced by homeless people in the city. As Amazon has pointed out, a fixed rate tax on all staff members is a disincentive to hiring. (It should also be mentioned that President Trump, on occasion, has taken shots at Amazon, with respect to its supposedly bargain usage of the U.S. postal service.)

(11) Pity poor Nevada. Among all U.S. States, it used to have a lock on sports betting. A just-released ruling by the Supreme Court has judged that state’s gambling monopoly to be unconstitutional. The initial challenge to Nevada’s supremacy was launched by Chris Christie when he was Governor of New Jersey. The betting floodgates will soon be open and the major pro sports leagues will come under increasing scrutiny, especially concerning game-winning and points-determining ‘referee calls’. The increasing legitimization of marijuana and gambling are causing more of the earnings of many individuals to branch aside into ‘sin’ activities as opposed to traditional consumer spending. How wise is that? Also pity the poor questioning economist. For she or he, there is the off-putting risk of appearing to be an uptight moralistic fuddy-duddy.

(12) Now to close with a ‘lightening round’ of Nuggets. The consumer confidence index of the U.S. Conference Board, which has already sparkled in the early going of this year, rose to 128.7 in April from 127.0 in March. (The CCI has 1985 = 100.0 as its middle-of-the-road base.). The Purchasing Managers’ Index (PMI) of the Institute for Supply Management stepped back in April to 57.3 from 59.3 in March. The current 57.3% level is still quite healthy, however. According to the ISM, if it were to be maintained for 12 straight months, it would correspond with a +4.3% increase in ‘real’ (i.e., inflation-adjusted) gross domestic product (GDP). Canada’s housing starts in April fell to their lowest point since October of last year, but at 214,000 units seasonally adjusted and annualized (SAAR), they continued to beat the 200,000-unit upbeat-versus-downbeat benchmark. There are, however, newly-imposed government measures working to cool Canada’s housing market. The Canadian Real Estate Association (CREA) says April was the worst month for existing home sales, on a seasonally-adjusted basis, in more than five years.