Another round of NAFTA trade talks is getting underway and there remain some yawning chasms between the goals of the U.S., Canada and Mexico. The U.S. wants stricter ‘rules of origin’ to ensure there is more American content in manufactured goods, especially vehicles. It would also like to see Canada relax its supply management practices in the trade of dairy and poultry products. 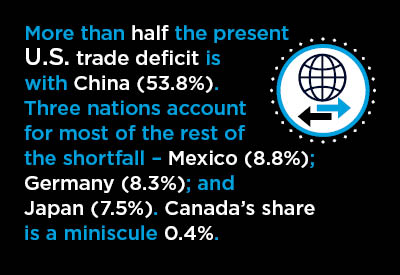 U.S. negotiators are proposing a ‘sunset clause’ so that any signed agreement would be subject to review and possible cancellation after five years. Canada and Mexico view such a notion as likely to seriously inhibit the ability of business leaders to make long-term investment decisions. Nor does the U.S. see the need for an official body to handle dispute resolution to the same degree as its neighbors.

Mexico is being pressured by both the U.S. and Canada to raise labor standards, toughen environmental regulations and improve its stance on human rights. Mexico ships more than three-quarters of its exports to the U.S.

Canada’s exports as a percentage share of gross domestic product (GDP) are about one-third (or higher, if services are included). The percentage of Canadian goods exports that are shipped to the U.S. is approximately 75%. Therefore, one-quarter (0.75 x 0.33) of what is produced in Canada (or one out of every four units) is sold to an American customer.

From a U.S. perspective, considerably more than half of U.S. states count Canada as their number one export market, and most of the rest look to Mexico. (Florida has Brazil as its top trading partner; Oregon and Washington state have their closest ties to China.)

The bottom line is that what happens with NAFTA is a big deal. There are ways to make it more beneficial, but there are also unnerving ways to tinker with it, or abandon it, that could lead to harm on all sides. Developments, as they unfold, will be watched with keen interest.

With the foregoing as background, there are also the following economic ‘nuggets’ to be gleaned from the latest government agency and private sector data releases. As I have grown fond of saying, the ‘soil’ is rich and the ‘crop’ abundant.

(1) Thanks to four mega projects that have landed in the data late in 2017, ConstructConnect’s year-to-date construction starts, in dollar volume, are +10.2% compared with the same January-to-October time frame of 2016. The four projects – two petrochemical plants (one each in Texas and Pennsylvania), an airline terminal (New York) and a natural gas pipeline (Pennsylvania) − combine for $23 billion all on their own. Notice that Pennsylvania is becoming an energy sector powerhouse.

(2) Through the first 10 months of this year, ConstructConnect’s starts have been led by industrial work (which includes petrochemical plants), +83.7%, followed by heavy engineering/civil, +27.7%. The institutional and commercial type-of-structure categories have stayed out of the spotlight, +0.4% and -5.5% respectively.

(3) Among other large projects with groundbreakings in the past six months have been several stadiums − for the NFL Rams and Chargers in Los Angeles and for the MLB Texas Rangers in Arlington. Also in the sports entertainment field have been newly-launched renovation initiatives for the Philips Arena in Atlanta and the Quicken Loans Arena in Cleveland.

(4) Besides the new Delta Airlines Terminal at LaGuardia in the Big Apple, airports in Orlando and St. Paul are seeing major new capital spending, on a concourse and taxiway for the former and an expansion of parking facilities for the latter. UPS is staying ahead of the curve with new package handling facilities in Jacksonville, Florida, and Arlington, Texas. Hotel, hospital and bridge construction starts have also been relatively plentiful of late.

(5) As reported by the Census Bureau, America’s foreign trade deficit in September was -$522 billion USD (annualized). While there can be no argument that over half a trillion dollars in the hole is a very large negative number, it should be emphasized that from early 2004 through most of 2008, the U.S. trade deficit routinely lay between -$600 billion and -$800 billion. The current disparity on the trade front marks substantial progress.

(6) More than half the present U.S. trade deficit is with China (53.8%). Three nations account for most of the rest of the shortfall – Mexico (8.8%); Germany (8.3%); and Japan (7.5%). Looking beyond just Germany, the Euro region takes a 16.7% slice of America’s trade deficit. Canada’s share is a minuscule 0.4%. With respect to Saudi Arabia and all OPEC nations, the U.S. is carrying small surpluses.

(8) When looking at the percentage changes in oil imports, it’s also important to know each country’s share of the total. For example, the sizable percentage jumps from Iraq, Nigeria and Brazil are due to their relatively modest base (or year-ago) levels. Canada, by a factor of more than three, is the largest source of U.S. oil imports. Canada’s share is 41.5%, way ahead of Saudi Arabia’s 13.1%. Next in line are Venezuela, 8.5%; Iraq, 7.5%; Mexico, 7.0%; and Colombia, 4.7%. OPEC nations combined, however, at 40.9%, almost match Canada’s 41.5%.

(10) The Purchasing Managers’ Index (PMI) of the Institute for Supply Management (ISM) in October eased back a little to 58.7% from 60.8% in September. Nevertheless, the PMI has stayed above 50.0% for the past 14 months in a row. A reading higher than 50.0% indicates that both manufacturing and the economy overall are expanding. From 43.3% to 50.0%, the economy is growing but manufacturing is in the doldrums. (Below 43.3%, it’s time to seek shelter in a well-provisioned cellar.) The ISM states in its press release that today’s PMI level, if it were maintained for a year, would correspond with ‘real’ (i.e., inflation-adjusted) annual GDP growth of 4.9%.

(11) Canada ran a trade deficit of nearly -$40 billion CAD (annualized) in September. The two product areas where the country has been most conspicuously failing to achieve balance have been ‘electronic and electrical equipment’ and ‘consumer goods’. But there has been plenty of good news with respect to ‘energy products’. The dollar volume of Canadian energy product exports so far this year is +45.5%. There are four provinces reaping the most from this bonanza: Newfoundland and Labrador, +34.7%; Saskatchewan, +54.9%; Alberta, +44.1%; and British Columbia, +85.1%.