Growth of U.S. Put in Place Construction Spending is Slowing Down

In September, for the second period in a row, the total U.S. put in place construction figure, seasonally adjusted and annualized in ‘current’ (i.e., not altered for inflation) dollars, from the Census Bureau was negative month over month (m/m). The decline versus August was -0.4%. 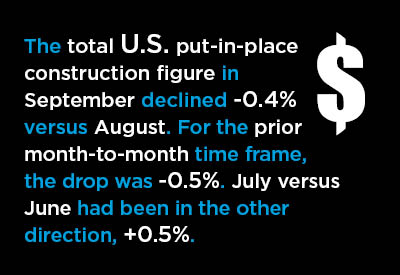 For the prior month-to-month time frame, August compared with July, the drop was -0.5%. July versus June had been in the other direction, +0.5%.

Both private and public construction investment took downward turns in September, -0.2% m/m and -0.9% m/m respectively. Public construction has had a particularly bad track record this year. It has declined m/m in six of the nine months of 2016 so far. Furthermore, all six of those drops have come in the most recent seven months.

Generating clouds of uncertainty that have been casting shadows of unease over many aspects of the U.S. economy of late has been the Presidential election campaign. With respect to construction activity, it has no doubt been causing some owners who might otherwise be proceeding with capital spending plans to delay a final yes-or-no decision until after the result of the November 8 vote has been determined.

The year-to-date statistics on U.S. put in place construction are more upbeat. Through the first three quarters of this year, total construction is +4.7%, with more support coming from the residential side, +5.9%, than from nonresidential, +3.9%. The former is currently accounting for 40% of total construction investment, with the latter making up the other (and bigger) 60%.

Nonresidential put in place investment year to date is being led by lodging (+25.7%) and office building (+22.0%) construction, with commercial/retail and (+9.4%) and amusement and recreation (+8.5%) also stepping ahead briskly.

The type of structure with the most severe percentage decline year to date in 2016 has been water supply (-10.4%).

There is another way to look at the put in place numbers, i.e., one that helps determine which type of structure categories have investment levels that are speeding up versus those that are experiencing a slowing down.
Such an approach is set out in the accompanying table, where percentage changes for latest three months versus previous three months, annualized, are compared with percentage changes for latest 12 months versus previous 12 months.

For each type of structure category, if the former percentage change is higher than the latter percentage change, then it can be said that put in place investment spending is speeding up. If the opposite is the case, then a slowdown is underway.

There are only two nonresidential construction categories where the pattern over the past three months has been an improvement over the latest 12 months: office construction and manufacturing.

If the current phase of torpor in U.S. construction investment can be surmounted, there are numerous reasons to anticipate a return to stronger capital spending. In the residential market, housing demand will be driven by rising incomes, low mortgage rates, a millennial generation that will soon be seeking to lay down permanent roots and a considerable accumulation of pent-up demand.

Nonresidential construction will receive an uplift from ongoing shortages in office space, an aging population that will drive health care needs, new and repair work on essential infrastructure and a gradual firming in energy prices that will be a spur to engineering/civil projects.

In the final two columns, if there is no check mark in the cell, then the type-of-structure category has stayed within 1.0%, up or down.